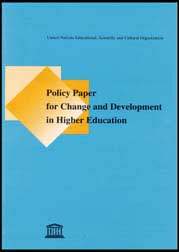 1. The second half of this century will go down in the history of education as a period of extraordinary expansion and qualitative transformations in higher education, which should be understood as one of the main parts of the functionally interdependent education system. It is usually composed of a wide range of types of institution where studies and training at higher level, teaching, the conduct of research (even if its level of intensity and funding, range of fields and scholarly standing can differ between particular types of institution), and services to society are principal tasks and activities.

2. This development should be seen as confirmation that we are living at a time when without good training and research at the higher level, no country can assure a degree of progress compatible with the needs and expectations of a society in which economic development is carried out with due consideration for the environment and is accompanied by the building of a ‘culture of peace’ based on democracy, tolerance and mutual respect, in short - sustainable human development.

3. It is under such broad terms that higher education everywhere is being called upon to be better adjusted and more responsive to the demands of times in which new opportunities are accompanied by new challenges and upheavals. It is now clear that higher education, like many other levels and forms of education, is being asked to reexamine, in view of its relations with society and particularly with the economic sector, its institutional and organizational setting, funding arrangements and management. Higher education is being asked to develop, with all relevant partners, a comprehensive vision of its goals, tasks and functioning.

4. UNESCO considers that the relevance of its mission is greatly reinforced at the present time, in many fields within its mandate, including that of higher education and science. In the fulfilment of its constitutional functions, namely to ‘maintain, increase and diffuse knowledge... by encouraging co-operation among the nations in all branches of intellectual activity, including the international exchange of persons active in the field of education, science and culture’, UNESCO relies on higher education and the academic and research community as a major partner in action. Moreover, it regards higher education as an intrinsic component of its overall programme in its main fields of competence - education, science and technology, social and human sciences, culture and communication.

5. In the context of current developments in higher education, international organizations active in this field are rethinking their policy agendas and programmes. UNESCO, in resolution 1.12 adopted at the twenty-seventh session of the General Conference in 1993, invited its Director-General to ‘pursue the elaboration of a comprehensive policy for the Organization covering the whole field of higher education’. This policy paper is a response to that resolution.

6. The document is the outcome of a worldwide reflection exercise on the role, main trends and challenges facing higher education, undertaken by UNESCO in close cooperation with national authorities in charge of higher education, non-governmental organizations representing the academic community and those involved in research on higher education. In response to the challenges facing higher education in a rapidly changing world characterized by shifting imperatives of economic and technological development and by new needs for social and cultural development, UNESCO launched, at the start of the 1990s, a worldwide reflection exercise on the role, main trends and challenges facing higher education. This consisted mainly of regional consultations which discussed and adopted several programmatic documents such as the Legon Statement on the Mission of the African University (Accra, 1991), the Agenda of Commitment for Higher Education in Latin America and the Caribbean (Caracas, 1992), and the Sinaia Statement on Academic Freedom and University Autonomy (Sinaia, 1992). Several studies were undertaken by the regional bureaux and centres of UNESCO. At the same time, the Secretariat of the Organization, in collaboration with the United Nations University and non-governmental organizations in the field of higher education, initiated the elaboration of two synthesis volumes, the first, entitled The University as an Institution Today, by Alfonso Borrero Cabal, was published jointly by the International Development Research Centre (IDRC) - Ottawa and UNESCO in 1993, and a second, entitled The Role of the University: A Global Perspective, edited by Torsten Husen, in 1994 as a joint publication of the United Nations University and UNESCO.

Data and analyses included in the Statistical Yearbooks of UNESCO, the 1991 and 1993 editions of World Education Report, the World Science Report 1990 as well as other UNESCO studies and documents provided the factual evidence used in the elaboration of this policy paper.

7. The meetings, publications and documents mentioned above have greatly contributed to building a shared platform of ideas and a conceptual framework for development and change which is reflected in the vision of higher education presented in this policy paper. Its elaboration should also be seen as part of a broader process aimed at reinforcing UNESCO’s role in the light of the profound political, social, economic and cultural developments currently taking place. Special mention should be made of the forthcoming reports by the International Commission on Culture and Development and the International Commission on Education for the Twenty-First Century, which was set up by UNESCO under the chairmanship of Jacques Delors, President of the Commission of the European Communities. Its reflection on the new role and demands of education also covers the challenges facing higher education in the context of other levels and forms of education.

8. The nature of the problems facing higher education is such that comprehensive, system-wide as well as institutional-level reform is needed. Consequently, any attempt to formulate a policy framework must draw on a wide variety of view-points. Several agencies of the United Nations system have been involved in the current debate on higher education. Other inter-governmental organizations have undertaken a similar exercise in the context of their own programmes and agendas. Their experience has been of great assistance.

9. The paper begins with a brief analysis of what UNESCO considers the main trends in higher education and which can serve as a basis for the formulation of the Organization’s policy. These trends are drawn from diverse national experiences worldwide and from the views expressed by Member States, intergovernmental and non-governmental organizations, higher education authorities, decision-makers and researchers. The main challenges facing higher education in a rapidly changing world may be grouped under three main headings:

- relevance, meaning the role and place of higher education in society and therefore covering its mission and functions, programmes, content and delivery systems, as well as equity, accountability and financing issues, while emphasizing academic freedom and institutional autonomy as the principles underlying all efforts to assure and enhance relevance;

- quality, defined as a multidimensional concept embracing all main functions and activities in higher education;

- internationalization, the inherent characteristic of higher education which has been considerably enhanced throughout the latter half of this century.

10. One of the principal features of the paper is an examination of how higher education can respond to these challenges, both at system and institutional levels, and on the contribution that UNESCO can make to supporting Member States and their higher education institutions in developing their own policies and in facilitating the process of change and development.

11. The comprehensive character and structure of this policy paper means that it is addressed to a broad spectrum of people. They range from individual members of the academic community to stakeholders and decision-makers in higher education and international organizations, including UNESCO, in view of its role as the specialized United Nations agency in this field.