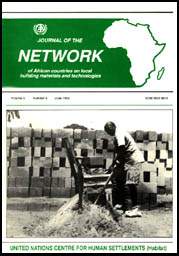 The National Construction Council is a Parastatal organization with the mission of promoting the development of the construction industry in the United Republic of Tanzania. Among the functions of the Council is to promote the use of locally-produced construction materials.

In the United Republic of Tanzania, use of alternative materials like stabilized soils blocks, lime, bamboo, etc., is still very limited. In an effort to promote the use of locally-produced materials, the National Construction Council has developed a database on the production and use of building materials, costs and research activities and findings associated with building materials. Although information on the production technologies for alternative materials is available, more effort is needed to disseminate it and make the materials acceptable to the target groups.

This paper looks at the present levels of supply of materials in Dar es Salaam, the sustainability of the supplies and options for alternative materials.

Dar es Salaam is the largest city in Tanzania with an estimated population of 2,000,000 people. The city which is also the main commercial centre has been growing rapidly in terms of population. The growth rate is estimated at 4.8 per cent per year. The rapid urbanization which is a typical characteristic of most of the towns in Tanzania has an adverse effect on the availability of essential services including housing.

Furthermore, the increase in cost of living makes housing and other related services unaffordable to the low and middle-income population. Another negative impact emanating from urbanization is environmental degradation due to overcrowding and lack of infrastructural facilities.

As it can be seen from the above table, the cost of cement - which is the most crucial and basic building material - has increased by 43 per cent between 1993 and 1994. Hence, inability of low-income population to build their houses using such an important material. The situation of low-income people is more desperate due to the fact that they cannot even afford to use lime. The cost of lime has increased five - fold between 1993 and 1994. 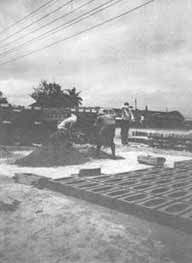 The type of stone found in Dar es Salaam is mainly limestone. There are reserves in Kunduchi, Boko, Bunju, Mjimwema and Mbwamaji. Mining is done by both licensed and unlicensed (informal) miners.

There are 60 licensed miners operating in Dar es Salaam. The total production of aggregate and stone from the licensed mines is as follows:

In addition to licensed miners there are a number of unlicensed miners estimated at between 1000 to 1500. These are hand-diggers operating mostly from old mines and other restricted areas. The cost of aggregate produced by hand is half of that produced by crushers.

However, the quality is not guaranteed with respect to size and hardness. Most of the stones used for hand crushing are soft and as a result a lot of dust is included in the aggregate. The estimated production of this group is as follows.

Stones are used mainly in floor construction as hard core. Apart from the use of stone for cladding walls, there is very little use of stone in masonry. Although there are no records available on the size of stone and sand reserves, there are indications that these reserves will not last for long.

The city of Dar es Salaam is expanding rapidly and most of the mines which used to be far away from residential areas are now surrounded by houses. In Kunduchi area where most of the stone and aggregate is mined, it is no longer allowed to blast using dynamite because of the proximity of the mines to sensitive buildings and services. This makes the supply of this material very expensive because digging has to be done using mechanical means.

Sand is another major building material used in Dar es Salaam. There are two sources of sand in Dar es Salaam. River sand which is recovered from rivers and quarry sand. The major sand deposits are located in - Mpiji River, Chamazi, Mbande, Tuangoma, Kitunda, Kipunguni, Majohi, and Pugu Mwakanga.

Like stones and aggregates, sand is also mined by both licensed and unlicensed miners. There are 20 licensed sand miners in Dar es Salaam. The total production from these mines is as follows: 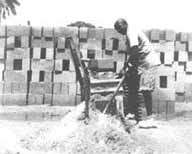 The supply of timber to Dar es Salaam for the past five years is shown in 6 table below.

The figure for poles represent poles supplied through licensed dealers only. This figure can be much higher if individual suppliers are included.

Soil is a building material which is yet to be fully utilized in Dar es Salaam. Apart from being used in raw form to fill in mud and pole houses, soil finds very little use in housing. Due to the ever increasing prices of the industrial building materials and the decreasing supply of cement this trend has to change.

Good quality clay is available at Kisarawe in Dar es Salaam. The only clay brick and tile factory situated in Kisarawe has topped production. As a result there are no burnt bricks or clay tiles in Dar es Salaam. Soil stabilization using cement, lime, pozzolana, etc., could also be employed in production of blocks. 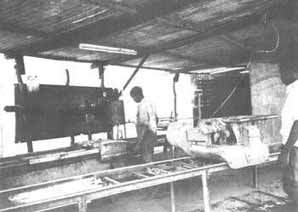 As can be seen, there is a decrease in the supply of cement and the situation will probably remain unchanged for the years to come.

Lime is produced at a very small-scale in Dar es Salaam. Although the raw material for lime is abundant, the use of lime in construction is not popular. Surprisingly, the price of lime is higher than the price of cement. This is mainly due to inefficient production methods. Lime could be used to supplement cement in most of the housing construction being carried out in Dar es Salaam if improved production technologies could be employed to reduce its cost.

The supply of factory made roofing materials in Dar es Salaam is adequate and it seems that supply and demand balance each other. The high prices of these materials may be a contributing factor. The most common factory made roofing material in Dar es Salaam is iron sheets. These are produced by the Aluminium Africa Company. The prices of these corrugated iron sheets has been going up and the sheets are now becoming unaffordable to the low-income segment of population.

Another roofing material in use is concrete tiles. There are three tile factories in Dar es Salaam. These type of tiles are mostly used by the high-income group.

The use of fibre reinforced roofing sheets and tiles is not yet very popular although there are a number of small-scale producers. However, for the low-income population the thatch is still the main roofing material.

The supply of building materials in Dar es Salaam is associated with adverse environmental problems. The extraction of aggregate especially by the unlicensed miners is damaging the environment. Moreover, the mines which are extended to restricted areas such as roads, power lines, and water pipes pose a danger to these lifelines.

Similarly, extraction of sand is contributing greatly to environmental degradation. Surveys made recently show extensive mining of sand in unauthorized areas. The effect of the illegal mining is the destruction of river beds thus prohibiting the flow of sand to the ocean which is causing beach erosion currently taking place. Illegal miners also extract sand from pits in residential and commercial areas, a practice which leaves big unplanned pits in the areas, thus, posing a danger to already existing buildings and infrastructure.

The sustainability of building materials supply to urban centres will depend very much on the production and use of alternative materials. Considerable research has been carried out in this sector, however, what remains to be done is the dissemination of information to the end users. Furthermore, over dependency on industrial materials such as cement, corrugated-iron sheets etc., should be avoided so as to increase the use of locally-produced materials.

Environmental impact assessment should also be taken into consideration seriously when deciding on materials to be promoted.

3. Jill, W. and others. Links between Population, Settlements, and the Environment: The provision of organic materials for shelter. South Bank University, London 1994.

4. United Nations Centre for Human Settlements. (Habitat), The use of selected indigenous building materials with potential for wide applications in developing countries, Nairobi 1985.

5. Roland, S. and others. Appropriate Building Materials, A catalogue of Potential Solutions St. Gallen, May 1988.