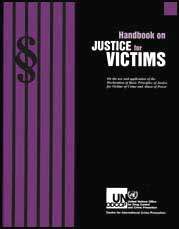 In traditional justice systems, victims of aggression have usually found support and assistance from their family, village or tribe. The informal social network softens the impact of victimization and assists the victim in recovery. This same network often assists in the resolution of the conflict and in ensuring that any decisions made are actually implemented. Within this context, it is taken for granted that the victim (and his or her kin), the victimizer (and his or her kin) and the entire social group will share the burden of dealing with the conflict.

In many parts of the world, with the increasing complexity of society and the evolution of systems of justice, the State has gradually assumed a dominant role in the justice process. Specific forms of behaviour are defined by the State as crimes, which have come to be seen more as crimes against the State than violations of the victim's rights. The State ultimately took over the responsibility for the investigation of the offence, the prosecution of the suspect, adjudication and enforcement of the sentencing decision. The victim was afforded fewer opportunities for direct participation. Although it was often the victim who reported the offence to the authorities, subsequent decisions came to be made more with the interests of the State and the community in mind than those of the victim.

This is not to say that the historical development has been a simple one of gradual diminution of the status of the victim. Traditional justice systems have not invariably been ideal from the point of view of the victim; mobilization of the community against the aggressor depended to a large extent on the social power of the victim and the victim's social group. Moreover, modern society has sought to provide extended protection to the victim through its criminal laws and systems of social security. In addition, the different criminal justice systems and other forms of justice have not all followed an identical path of development. In some present-day systems, such as those of Islamic countries and several European countries, the victim plays a key role throughout the criminal justice process.

Nonetheless, by the middle of the present century, in many societies the victim could aptly be termed the "forgotten person" in the administration of justice. Considerable attention had quite justifiably been paid to ensuring due process for the defendant, who is, after all, threatened with State-imposed punishment, and should, therefore, be afforded every possibility of establishing his or her innocence, and/or presenting other considerations in his or her defence. This degree of attention had not, however, been paid to the victim. The State was assumed to be representing the interests of the victim and accordingly no need was perceived for direct victim involvement in the proceedings.

Since the early studies in the 1940s by Benjamin Mendelsohn and Hans von Hentig, increasing attention has been turned to the problems faced by victims, both in society in general and in their interaction with the criminal justice system in particular. Many victims face insensitive treatment by the police, prosecutors and court officials, thus causing a "second injury". This applies particularly to certain especially vulnerable categories of victims, such as migrants, minorities and victims of sexual offences, as well as refugees, prisoners of war, and civilian victims of war and civil strife. Even if the offender is apprehended and brought to trial, the experience of victims in many jurisdictions is that they have been marginalized and do not have the opportunity to express their views and concerns in the criminal justice process or in human rights courts or international tribunals. Many systems do not allow the victim to present his or her civil claim in conjunction with criminal proceedings. Even if the offender is convicted, the sanctions (often a fine, probation or imprisonment) have little relevance to the victim, other than affording the satisfaction of seeing the offender punished.

Also, other factors, such as the changes in society that have increased the scope and impact of victimization, have led to a fundamental re-evaluation of the position of the victim. The incidence of crime and of abuse of power has increased worldwide. At the same time, traditional patterns of social solidarity and dependency have been disrupted. Changes in modes of production and trends towards urbanization, which have been accompanied by extensive internal and international migration and the impairment of societal infrastructure have diminished the role of the extended family and the force of social controls. Anomie, unemployment and a weakening of social support schemes have undermined the ability of individuals to recover from victimization.

Various jurisdictions have tried to respond to these challenges and to strengthen the position of the victim, as well as ensure access to appropriate services. One of the earliest calls for reform came from Margery Fry in the United Kingdom of Great Britain and Northern Ireland, who during the early 1950s argued for shelters for battered women, for State compensation schemes for victims of crime, and for reconciling the victim and the offender. The first State compensation scheme for victims of violent crime was adopted in New Zealand in 1963. Other examples of early reforms include the 1955 child protection legislation in Israel, and the establishment of shelters for victims of domestic violence and crisis centres for victims of sexual assault in the United Kingdom during the early 1970s.

At the international level, interest in victims can be traced back at least to the international congresses held during the late 1800s, where, for example, many called for a general return to reparation in criminal justice, an issue which has been dealt with in more recent years by organizations such as the International Association of Penal Law, the International Society of Social Defense and the International Society of Criminology. The first major international meeting focusing specifically on victims was the first International Symposium on Victimology, held in Israel in 1973, which led to the establishment in 1979 of the World Society of Victimology. A number of other international entities have since dealt with core issues related to victims of crime and abuse of power. At the intergovernmental level, the work of the Council of Europe led to the adoption of the 1983 European Convention on the Compensation of Victims of Violent Crimes (which entered into force in 1988), the 1985 recommendation on the position of the victim within the framework of criminal law and procedure, and the 1987 recommendation on assistance to victims and the prevention of victimization.

The adoption by the United Nations General Assembly of the Declaration of Basic Principles of Justice for Victims of Crime and Abuse of Power in 1985 is by no means the only example of United Nations activity in this field. The work of the United Nations in preventing abuse of power and violations of human rights is long-standing and includes among its achievements the Universal Declaration of Human Rights, the International Covenant on Civil and Political Rights, the Convention on the Prevention and Punishment of the Crime of Genocide, the Convention on the Protection of All Persons from Being Subjected to Torture and Other Cruel, Inhuman or Degrading Treatment or Punishment, the Convention on the Rights of the Child, and the Convention on the Elimination of All Forms of Discrimination against Women. The United Nations has also developed international guidelines to reduce abuses against the elderly, the disabled and the mentally ill, and has drafted basic principles and guidelines on reparation for victims of gross violations of human rights and humanitarian law.

In recent years the United Nations Security Council has worked to establish two ad hoc international criminal tribunals for the former Yugoslavia and Rwanda. The effort to establish a permanent international criminal court, which has continued for decades, is now close to becoming a reality through the action of the United Nations. The Preparatory Committee on the Establishment of an International Criminal Court has given positive consideration to provisions related to victims, in particular with regard to the proposed creation of a unit for victims and witnesses.

On a practical level, the United Nations has sought to provide humanitarian assistance to victims of natural and man-made disasters. Its peacekeeping operations have also sought to assist victims of ethnic violence and civil strife. The United Nations efforts in the prevention of discrimination against minorities, and violence against refugees and other vulnerable targets, especially migrants, women and children (including the International Programme for the Elimination of the Exploitation of Child Labour) are further examples. More work needs to be done, however, to fully address the special requirements of crime victims in developing countries and in countries with economies in transition, as well as special categories of victims, such as victims of genocide, terrorism, organized crime and other types of mass victimization.

The work of individuals, organizations, Governments and international bodies to restore victims to their rightful place in legal systems and increase the quantity and quality of assistance available to victims has not been easy. Legal systems have evolved gradually over the centuries, and proposals for reforms to benefit victims have raised concerns that they may detract from the legitimate rights of others, such as suspects and defendants. Furthermore, it has often proven difficult to sensitize key representatives of the criminal justice system, policy makers, legislators and members of the community to the fact that change is needed.

There may, in fact, be areas where the interests and concerns of victims are at odds with those of others. The establishment of victim services requires resources which might consequently not be available for other purposes. Various procedural rights, such as the right to confidentiality and protection, must be balanced against the rights of the defendant, such as the right to confront the accuser and to prepare his or her defence.

In most cases, however, there is no such conflict. Although services require resources, it should be realized that any member of a community may become a victim and that most crimes contribute to the victimization of other community members and the deterioration of community and societal harmony. A new framework of restorative justice, which involves the offender, the victim and the community in creating a balanced approach to justice, is becoming increasingly popular. Assistance to victims counters deleterious effects, reaffirms social solidarity and thus also benefits the community at large. Restorative approaches, such as victim-offender mediation and reconciliation, can also have a preventive effect. Ensuring that the victim has means of recourse and redress, in accordance with the legal system in force, helps to ensure that justice will be done and is clearly in the interests of society.

This is true not only within countries but also across borders. The growth of transnational crime has made international collaboration against it indispensable. Organized crime, especially trafficking in human beings, terrorism and other forms of violence, claims multitudes of victims and requires a concerted response, including preventive measures.

Massive victimization has claimed countless lives and blighted human prospects. The breakdown of the rule of law and of basic institutions in these desperate situations has made the establishment, or re-establishment, of an effective justice system an urgent priority in many countries and may require the assistance of the international community. Preventing such cataclysms is not only a task for individual societies, but the responsibility of the entire world community.