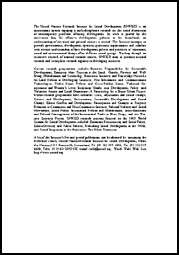 Lawyers can play a crucial role in ensuring that peasants receive legal information and that laws granting them specific rights and resources are enforced in their favour. Due to high rates of rural illiteracy and difficulty in accessing information, legal expertise is generally absent in rural areas - especially when it comes to the interpretation and application of modern land laws. Indeed, some specialists have argued that legal activities should not be the exclusive prerogative of lawyers and judges as many of the public policies, legislation and legal cases directly affect the ordinary people and groups. Furthermore, they emphasize that laws should not aim only to defend the interests of the poor or the disadvantaged, but rather to eliminate the structural causes that underlie their condition (Soliman, 1987:46-47).

During the late 1980s, the International Commission of Jurists (ICJ), an international association of independent lawyers, held a series of seminars in South Asia, South-East Asia and Latin America, focusing on the role of lawyers and legal services for the poor in rural areas. These seminars assessed rural legal services and encouraged debate and reflection on the role of lawyers in rural development. The term "legal services" was preferred to legal aid, as it "encompasses training of paralegals, the production of simplified legal materials and information dissemination, counselling, mediation and negotiation" (ICJ, 1997:15).

All seminars pointed to the poor provision of legal services in rural areas. In Peru and Colombia, for example, government legal services are concentrated in urban areas, making it difficult for the rural poor to access them. A second problem, confronted by indigenous peoples (often a significant proportion of rural populations) who have lost customary lands, was a feeling of alienation as a result of linguistic and cultural differences. This often leads to their marginalization in the few legal aid programmes that do exist (see GarcSayan, 1987). The South and South-East Asian seminars brought out the social and geographical distance separating most lawyers from peasant issues, which may lead them to be viewed with suspicion rather than as potential allies in defending local interests. In all regions, however, the importance of having peasant organizations, NGOs, church groups and other local organizations incorporate legal services into their agendas was highlighted.

Many popularly oriented NGOs and local voluntary organizations are getting involved in "legal literacy" and awareness-raising campaigns, which use simple techniques such as translating laws into local languages, publishing information pamphlets and using theatre and rural radio programmes to disseminate information on land rights and legal assistance to the rural population. For example, the Association of Female Jurists in Cameroon discusses women's land rights on both radio and television. The AJAC/Z (Youth Association of the Ziquinchor Region in Senegal) translates laws and relevant documents from French into local languages and disseminates this information via seminars and workshops. The Society for Participatory Research in Asia (based in India) transcribes relevant land laws into accessible languages for rural legal activists and leaders. Casa Campesina in Peru holds radio and television discussions on legal aspects of agrarian questions.2

2 The above examples are based on responses to an UNRISD/IFAD questionnaire on land reform conducted in 1997.

Given the high cost of professional legal services, the training and use of paralegals has grown in recent years. For many NGOs this has been a way to avoid costly outside professional help yet still provide marginalized rural groups with some legal assistance. Paralegals are generally local actors (community leaders, social workers, teachers, law students, development workers, etc.) who receive training and education on legal questions and act as assistants to lawyers in locating evidence and other information that might be necessary to defend their case. They may also conduct research on certain cases and provide referrals to lawyers where necessary. Furthermore, they often play a wider social role, mediating conflictual situations, mobilizing communities and assisting in the establishment of people's organizations (Ravindran, 1988:7). Their role in society can potentially encompass far more than a lawyer's, and because they come from local areas they are often deemed more credible than outsiders. Because they may be more aware of customary law and can thus use it where applicable, their approach may be more flexible.

Lawyers may play a central role in training paralegals, however, as may social workers, academics (sociologists, psychologists, etc.) and others (ICJ, 1997). Paralegals are often hired by local organizations or are requested to assist on a voluntary basis, although the latter appears to be rare.

The fact that pay is less, and rewards in terms of other material and social gains fewer, may dissuade lawyers from providing legal services to the rural poor. Dias, in his discussion of obstacles facing "law as a resource for the poor" in South-East Asia, points to the desire by lawyers to monopolize information and knowledge on legal matters (1987:27-42). In other words, they may fear losing their professional hegemony of knowledge about land legislation. According to this specialist, rural communities and individuals require lawyers to impart a degree of information and skills.

However, lawyers do sometimes get involved in local legal service programmes. A noteworthy case is the Legal Resource Foundation (LRF) in Zimbabwe, a non-profit organization whose board of trustees includes a former Chief Justice, a Supreme Court Judge, as well as other prominent lawyers (Coltart, 1993). The foundation's lawyers actively train paralegals, provide legal advice, carry out research and litigate in public interest cases through Legal Project Centres set up in rural areas. In order to overcome resistance by lawyers who might perceive the group's activities as potential competition, the LRF formulates and implements its programmes in close collaboration with the Law Society of Zimbabwe (Cottart, 1993).

Similarly, the Legal Resources Centre (LRC) is one of eight legal institutions in South Africa helping the urban and rural poor in land restitution cases. It represents poor black communities in land conflicts, contending land claims in protected areas and the provision of formal titles. It also provides legal education and training on subjects including acquisition of land, subsidies for land purchase and loan repayment (LRC, 1995). But demands for legal services are much greater than LRC and other organizations are able to offer (personal communication with a lawyer working for LRC, October 1997); significant conflicts over land-related issues and land reform persist in the country.

Although there are examples of lawyers and legal institutions working to protect peasant rights, enforce laws that support the claims of the rural poor - to land, agricultural extension services or other resources - and prevent the "appropriation" of law by those with more political, social and economic clout, many such attempts are not wholly effective. The individuals and institutions so inclined usually lack human and financial resources and are thus able to cover only a small number of cases. Some may have promising beginnings but fail as a result of diminishing capacity - although most of the time this is due to factors beyond their control (lack of funding, for example) rather than absence of will. Also, their energies may be diluted through pressures to include activities more solicited by donor agencies. Some of these issues are considered in the following discussion.