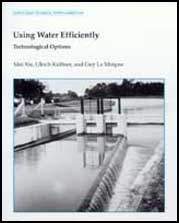 Annex II Implications of Increasing Water Use Efficiency in a Basin

The following four schemes are designed to illustrate the impact (both favorable and adverse) of increasing local water use efficiency (WUE) in the context of a basin. The concept is demonstrated through a numerical example.

We assume that a source (say a reservoir) provides 300 units of water to various users in the basin. Of this, 100 units are diverted for irrigation through conveyance and distribution canals to Area- 1, the remainder (200 units) flow downstream to Area-3. An intermediate point, Area-2, does not get water directly from the source (as do Area-1 and 3). Instead, it relies on return flows from Area-l. Area-I has an initial irrigation network efficiency of 60 percent (i.e. of the 100 units diverted from the river, only 60 units reach the field inlets). What happens, under alternative water use configurations in the basin, if this efficiency level is raised to 70 percent?

i. Return flows cannot be reused by downstream users (Figure 1)

Assuming irrigation network efficiency, En, of 60% and ET/EV losses of IO units, the remaining 30 units are leaked from the distribution canals through seepage processes. When En increases to 70%, 70 units out of 100 reach the fields in Area-I. The irrigated land in Area-1 is either expanded (see Figure Ib), in which case production increases, or it is kept constant. Of the latter is the case Figure Ic, the increased efficiency level of 70% allows a larger volume (215 units instead of 200) of water to go to downstream users, that is, to Area-3. Because the seepage water is not reused, the reduction in seepage from Area-1 has added to total water availability in the basin.

ii. Return flows are only used by Area-2 (Figure II)

Since Area-2 relies, for its water supply, on seepage from Area-1, increased efficiency in Area-1 is clearly reflected in the reduction of return flows in Area-2 (from 30 to 20 or 15). As shown in Figure IIb, Area-1 obtains 10 units more at the field inlets as a result of increasing En to 70%. If this water is used within Area-1 to expand irrigation, Area-2 will receive 10 units of water less to support whatever water using activities exist in that area. If the irrigated Area in Area-1 does not increase, 15 more units of water are delivered to the downstream Area-3 (see Figure IIc), and Area-2 still receives less water supply. A trade-off occurs among the three users, i.e. increases in production upstream or downstream through improved WUE are based on reduction in production in Area-2.

iii. Return flows can be reused by both Area-2 and Area-3 (Figure III)

Assume now that some of Area-3's water supply is also derived from return flows from Area. Then the increase in efficiency in Area-1 could either lead to expanding its own irrigated area, reducing return flows to Area-2 and, by extension, reducing return flows to Area-3 (Figure IIIb), or it could result in an increase in direct water supplies to Area-3 (Figure IIIc). An obvious benefit of the latter is the improved water quality downstream due to increased direct water flows, rather than secondary return flows, in the river or canal. The resolution of the trade-off between the three areas depends on economic valuations of activities in each area and environmental and water quality requirements in the basin.

Note now that only Area-3 depends on seepage flows from Area-l. Higher local efficiency (70 percent) in Area-1 results in seepage losses falling and reduces water flows into the river. Clearly, if the supply to Area-1 is reduced to take account of this increased efficiency, Area-1 continues to irrigate the same amount of land, and maintains at the old level production. However, more fresh water can now be released to downstream users. Not only does the downstream area get the same amount of water, water quality will also be improved. There is a trade-off between production in Area-1 and Area-3. Again, the resolution of this trade-off depends on economic valuations of activities in these two areas.