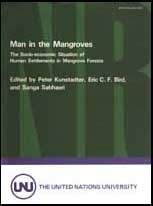 Mangroves are typically tropical vegetation, but they extend into subtropical environments in southernmost Japan, growing well on Okinawa and the Amami Islands and reaching their northern Japanese limit on southern Kyushu. They have been discussed in papers by Miyawaki (1980, 1981, 1984) and Miyawaki, Okuda, et. al. (1983).

Mangroves grow on silt and mud flats in bays, estuaries, and lagoons, and along the shores of estuaries. Sites suitable for mangrove growth are very restricted in south-western Japan, and are mostly on the Ryukyu Islands (figs. 1 and 2), where mangroves cover only a limited area. They grow up to 5 - 8 m in height on Iriomote, Ishigaki, Miyako, and Okinawa islands (Miyawaki, Suzuki, et al. 1983; Miyawaki, Okuda, et al. 1983). Japanese mangrove forests have up to 12 species, including Rhizophora stylosa, Kandelia cancel, Bruguiera gymnorrhiza, Lumnitzera racemosa, Avicennia marina, Sonneratia alba, Excoecaria agallocha, Acrostichum aureum, Nypa fruticans, and Heriteria littoralis. At the margins one can also find Clerodendron inerme, Derris trifoliata, and Dalbergia candenatensis.

Mangroves in Japan are at the northern limit of their distribution in the Indo-Pacific region. They occur as fragmental outliers, typically with only one or a few species, and form scrub or low forests with only one or two vegetation layers. Six mangrove communities have been recognized, dominated respectively by Avicennia marina, Sonneratia alba, Kandelia cancel, Rhizophora stylosa, Bruguiera gymnorrhiza, and Lumnitzera racemosa (Miyawaki 1980, 1981).

On Iriomote the mangroves are poorly developed and low-growing, with five species occupying zones parallel to the coastline or the banks of tidal estuaries. This is the only island where the Sonneratia alba community is present (fig. 3). The Avicennia marina community occurs on Iriomote, Ishigaki, and Miyako, reaching its nothern limit on Miyako. Its growth is sparse and stunted. The Kandelia cancel community also grows on Iriomote (fig. 4) and on Okinawa, reaching its northernmost limit in southern Kyushu (fig. 5). The Rhizophora stylosa and Bruguiera gymnorrhiza communities (fig. 6) are extensive on Iriomote and Ishigaki, the Rhizophora occupying the seaward margin, subject to deeper and more prolonged tidal submergence (fig. 7). The Lumnitzera racemosa community shows only stunted growth, mainly in areas where other mangroves have been removed, as on Iriomote and Ishigaki. Ecological studies of these mangrove communities by Miyawaki, Suzuki, et al. (1983) and Miyawaki, Okuda, et al. (1983) have been published.

Uses of Mangroves in Japan

Demands on mangroves to satisfy social and economic needs have not been great in Japan, but the mangroves in the Ryukyu Islands form an unusual landscape which each year attracts many Japanese tourists to the area (figs. 8-10). Secondly, mangroves help to sustain fishery as a source of food for local people (fig. 11). Finally, mangroves are being conserved for ecological studies which may help improve the productivity of this type of forest.

Mangrove vegetation in Japan has been disturbed by various human activities as described below. Some mangroves have been set aside as natural environments to be conserved, but so far this has been only partly successful. Reforestation of damaged mangrove areas on the basis of ecological and phyto-sociological research has been attempted in some of the coastal areas of southern Japan. Eventually, mangrove forests will have many ecological and socio-economic benefits in Japan.

Human Impact on the Mangrove Forests

Many natural environmental factors influence the species composition of mangrove communities. These factors include topography, climate, tides, salinity, strength and direction of tidal currents, and the substrate sediments, whether muddy, sandy soil, or hard ground (fig. 12). These all can be potential limiting factors in the natural vegetation of mangroves.

Human activities influence the habitats of mangrove plant communities in many ways, producing many kinds of modified vegetation. Under extreme conditions, however, the land may remain bare or support very little vegetation after the mangrove cover has been cleared. For example, if Sonneratia alba or Rhizophora stylosa communities are cut, these species recover only as scrub. If cut repeatedly, they disappear and the land remains bare.

In Japan the main forms of human impact on mangrove vegetation have been (1) cutting mangrove forests for firewood and construction material (mostly in the past), (2) disturbance by building river-bank levees and by road construction, and (3) reclamation for urban and industrial areas. These activities alter, degrade, or completely destroy the vegetation of the mangrove community.

The socio-economic values of mangroves in Japan include (1) their tourist potential, (2) their fishery potential, (3) landscape protection, and (4) education for science and nature conservation. These uses are characteristic of Japanese mangrove forests. They are somewhat unusual on the world scale in that mangroves are not used by local people in ways that are common in South-East Asia (Miyawaki, Sabhasri, et al. 1983; Miyawaki 1 984).

FIG. 13. Monthly variations in the number of tourists visiting the mangrove area on Iriomote, 1980-1983

In order to make effective use of these potential values, there is a need to provide information for tourists and students about the natural ecology of mangroves. Better understanding creates more interest, and this will help to protect the natural environment and ensure that mangroves survive in the future in nature reserves which will contain potentially useful gene pools.

There are plans to make vegetation maps and guidebooks to show what kinds of mangroves there are, where they grow, and how these ecosystems function. Nature centres are being provided in special areas to educate tourists. Records of visitors to Taketono-cho on Iriomote show that tourism is greater in August than in other seasons (fig. 13). Tourists will continue to come to these areas not only to see mangroves from boats but also to explore them using wooden walkways, and so gain an understanding of the mangrove system. This must be done in such a way as to avoid putting excessive strain on the mangrove ecosystem. A successful tourist attraction is one that can be maintained to bring tourists back again and again for recreation and education.

In the Japanese perspective, mangroves are an exotic landscape, which, along with coral reefs, at tract educational as well as scientific interest in the warmer southern parts of our island nation.

Miyawaki, A. 1984. "Phytosociological studies of mangroves in Japan and Thailand, with special reference to human impact." Proceedings of the MAB/COMAR Regional Seminar, Tokyo, pp. 107110.