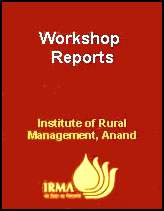 c. Correction of the mistakes made by the project authority in designing various structures. For example, according to KN Patel, in the case of Mahi Right Bank Canal in Gujarat, most of the outlets were not located properly by the canal engineers. But when the people were involved in the distribution of canal water, these defects were noticed and rectified in consultation with the local people. Similarly, according to Vivekanandan, most of the fish landing sites and market yards in the coastal areas of Kerala were not designed and located at proper places resulting in their not being used by the local fishermen. These mistakes could have been easily avoided if the local fishermen had been consulted by the officers of the Fisheries Department while taking decisions about the location of these facilities.

d. Increase in the level of political awareness of the people. For example, according to Vivekanandan, fishermen in coastal Kerala villages became more politically aware and to that extent politically developed and powerful when they were organised into fishermen’s co-operative societies. They were able to influence decisions relating to their livelihood and now, no political party in power in Kerala can afford to ignore them.

e. Reaching the benefits of NRM programmes to all the legitimate claimants. For example, according to Nagabrahmam, in Ashi village of Kheda district in Gujarat, the tail-enders got canal water for the first time in 30 years when they formed a water users’ co-operative society and had a say in the distribution of canal water.

f. Decrease in the perpetual dependence of people on the government/NGOs and thereby making the programme self-sustaining and the local people self-reliant.

g. Gaining access to and control of resources. For example, in Valiathura village in Trivandrum district of Kerala, fishermen introduced artificial reefs and saw to it that other fishermen from neighbouring villages did not have access to the fishing spots in the neighbourhood of the reefs, i.e., in a way they privatised an open access resource.

i. Project implementation becomes easier and smooth as a result of participation of local people.