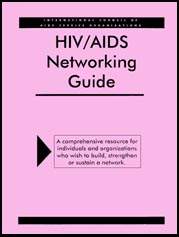 Why This Guide Was Developed

The guide has it origins in several discussions between members of the International Council of AIDS Service Organizations (ICASO) on how to respond effectively to the numerous requests for assistance from members and other groups on networking issues.

Many of the inquiries were from people or organizations who simply wanted to know more about the experience of others in networking, either in an informal sense, or in a formal or structured network. Other requests were more specific in nature and focused on the mechanics of starting or keeping a network going.

Responding to these requests was sometimes difficult because of the absence of written information on the “networking experience” in HIV/AIDS work, the diverse subject matter of many of the requests, and the lack of easily accessible information on many networking issues.

The development of a resource to address many of the commonly asked questions about networking was seen as a practical response by ICASO to a need for information on this subject.