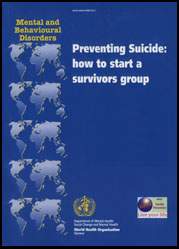 When an individual takes his or her life the impact of the death has a ripple effect. All who had a relationship to the person will feel a loss. The quality and intensity of that relationship have been identified as key variables influencing bereavement outcomes. Caring for the immediate loved one will often overshadow the needs of other significant loved ones. If families and friends can be brought together to share and support each other during the bereavement the adjustment to the loss of the loved one will be more readily achieved.

People will need to resolve their feelings in their own way, in their own time. What works for one person may not work for another. If survivors can gain an understanding of the differing responses to grief that individuals may experience, they can all be helped by providing supports for each other. A few of the factors influencing the grieving process are the relationship to the deceased, the age and sex of the survivor, the trauma of finding the deceased, and the availability of other support systems. It has been estimated by various sources that for each person who dies by suicide, the number of people severely affected by the loss is between five and 10. This can represent a significant number as the circle is extended to include the contacts individuals and families make throughout their lives and within their communities.

The effect of a suicide on various family members should be considered, as it may differ for each. A number of examples may serve to heighten awareness.

The needs of children in the family where a suicide occurs may be overlooked. A death in the family can be a very frightening and confusing event for a child. The natural impulse for the parents or carers of the young is to shield and protect them from the trauma. Nevertheless, the sound mental health response is to endeavour to cope positively with the situation. Parental reaction to death has a definite impact on the child's reactions. At the core of helping children to cope and adjust is the need to include children in the grieving process, to be open and honest to the extent that they are able to comprehend, and to explore their knowledge and feelings on death and dying.

Adolescence as a developmental stage in growth brings with it many complex changes. The conflicts of activity and passivity, pleasure and pain, love and hate, despondency and autonomy are shared by the developing adolescent and people who are grieving. Both involve coping with loss and the acceptance of reality. Young people's grief reactions can differ markedly from those of adults and can often be misinterpreted. Behavioural response may be at either end of the scale from adopting a parent-like role not typical of their age group to adopting the opposite stance and “acting out” to gain attention and assurance. Males as portrayed in Western society do not encourage emotional expression. As an outlet for the release of tension adolescent males may exhibit such behaviours as aggression, anger, the testing of authority, and abuse of drugs and alcohol. Adolescent females, in contrast, will often feel a longing for comfort and reassurance. Adolescents will often show resistance to professional intervention, e.g. counselling or self-help support groups. The main source of support for adolescents comes from within the family unit. While it is acknowledged that adolescents often speak to peers about personal matters, significantly more boys and girls use family members as confidants. Programmes aimed at lessening the risk of post-bereavement disorders need to be considered for implementation with adolescents.

The elderly, whether as grandparents or parents who have lost an adult child, will suffer profoundly. The spouse or partner of the adult child will be the recipient of the first line of condolences. The community may consider, because the child has grown and been conducting an independent and separate life away from the parents, that the effect is lessened. This is not the case. A child, regardless of age, will always be a part of the parent. To grandparents, the death of a grandchild imposes grief that is two-fold - the acute pain they feel as parents for their son or daughter and also the intense grief for the loss of their grandchild.

Friends and colleagues will also be affected by the death in varying degrees, depending on their relationship to the survivor, to the deceased and to the family as a unit. Pre-existing attitudes will also influence reactions, as they do with all people coming into contact with suicide. Indeed, all who have a close relationship to the deceased may in some manner experience the feelings that are unique to those bereaved by suicide.

It is important to remember that suicide does not occur in isolation but within communities. Groups and organizations (schools, the workplace, religious groups) within the community that are affected by the loss may benefit from the assistance of professionals such as health care workers or similarly trained persons to provide after-care and guidance. Cultural, religious and social beliefs can also be explored and discussed. This interaction can provide a safety net to identify those who may also be at risk and provide an increased understanding of the circumstances that can relate to a death by suicide.

A healthy community response is one where all sectors are considered in the stage after the event.