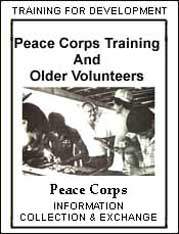 The learning environment created for a good training program is particularly relevant to language learning. Pleasant physical surroundings and an enthusiastic atmosphere are important features. The capacity to learn is not diminished with the older Volunteer, but appropriate methodologies, effectively delivered, are critical for success.

In a worldwide survey of Peace Corps staff, the most common concern about older Volunteers was that of language learning. Many believed that older Volunteers learned languages more slowly than younger Volunteers. For all individuals who have not had previous foreign language learning experience, their progress may be slower. Another survey indicated that difficulty in achieving proficiency in a foreign language was the most frequent reason for early termination by older trainees. Learning a foreign language is an example of a situation which requires a willingness to take risks and make mistakes. The anxiety over learning and setting higher standards for themselves may be somewhat overwhelming and impede progress in situations where the older Volunteers would normally perform very well.

The difficulty in learning the language frequently comes from the methods or the skill of the trainer. Some of the methodologies are fast, repetitive, rote systems of word building with insufficient explanation. Language trainers should broaden the base of their repertoire of skills and techniques to adapt more readily to different ages and levels. Older individuals frequently prefer training with familiar systems so that new methodologies should be introduced by associating them with the systems with which they are more familiar. Proceeding from the known to the unknown is an effective approach to gaining the confidence of certain groups.

During adulthood most learning takes place on an informal basis through daily contacts, rather than through drills and memorization in a competitive, compressed, time-oriented atmosphere. The small group, fast-paced, repetitive, stressful type of drilling instruction impedes learning for some trainees. Trainees have a wide variety of ability to learn language which can relate to a natural ability and/or their previous environment and experience with foreign languages. Older trainees should be encouraged to minimize competitive situations with other Volunteers since this could become an obstacle in achieving their natural potential which may, in fact, exceed that of a younger Volunteer.

All trainees, particularly those who are older, can benefit from discussions of non-verbal communication and other methods which are acceptable within the culture. Personality, enthusiasm, new friendships, etc., are avenues to overcoming initial communication problems and may serve to give the trainee the confidence to plunge quickly into daily use of the language.

Many older Volunteers who have difficulty learning a second language have been very successful otherwise as a result of personal strengths in technical skill, patience, tolerance and general interest. Trainers should emphasize to older Volunteers that good communication consists of many parts of which specific language skill is only one.

Fluency in the language is frequently more critical in one job assignment than another. For those who acquire the language more slowly, adjustments in the language training goals should be considered where appropriate and on an individual basis.