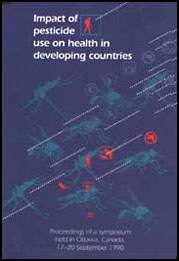 From their first appearance, pesticides were recognized by farmers and by public-health officials as valuable adjuncts to food production and disease prevention. New families of pesticides have since been developed, and the search for others continues. As research progresses, older pesticides - such as the organochlorinated compounds - have been banned or restricted because of their adverse effects on the ecosphere. The development of resistance in pest species has resulted in increased dosages or the application of new compounds. Finally, we now realize that pesticide poisoning of humans, especially in the Third World, is a serious problem.

In recognition of this health hazard, two scientific committees of the International Commission of Occupational Health (ICOH) - the Committee on Pesticides and the Committee on Occupational Health in Developing Countries - and the International Development Research Centre (IDRC) of Canada sponsored a symposium entitled “The Impact of Pesticide Use on Health in Developing Countries.” The symposium was held in Ottawa, on 17-21 September 1990, to precede the 23rd International Congress of ICOH held in Montreal the following week. This book is a collection of expanded and edited versions of papers that were presented at the symposium.

Soon after the first comprehensive study, commissioned by the World Health Organization (WHO) in the early 1980s in Sri Lanka, IDRC provided financial support to four groups of researchers in Southeast Asia to look at occupational intoxication by pesticides. Their studies confirmed that pesticides do pose a serious health risk in many Asian countries. The findings are discussed, in the context of our present knowledge of the risks pesticides pose to public health, in a monograph by Professor J. Jeyaratnam who spearheaded the WHO study as well as serving as the regional coordinator of the IDRC project, carried-out in Indonesia, Malaysia, Sri Lanka, and Thailand.

Results from this project made several points clear: agricultural workers had little knowledge, if any, of the toxicity of pesticides or of their proper use; what knowledge that did exist was often erroneous; personal spraying equipment was more often than not in a sad state of disrepair and operators seldom used appropriate protective equipment and clothing; and pesticide intoxication in Southeast Asia had become a serious problem.

More recently, IDRC has supported a number of research projects on pesticide intoxication in different regions of the Third World, investigating these and other issues that have surfaced since the first investigation. Most studies have concentrated on agricultural workers, and these are reported in this publication.

There are alternatives to the use of pesticides in agriculture and public health. IDRC has also been involved in the research effort to develop other methods, which can be as simple as crop rotation or as highly technical as genetic engineering of pest-resistant crops. Effort is also being expended on the identification, development, and field-testing of botanical pesticides. These topics were discussed during the symposium, as was integrated pest management and how it can afford a measure of pest control with a reduction of costly and sometimes hazardous inputs.

The symposium was an opportunity for lively and constructive exchange of information, presentation of new data, and thought-provoking discussions by scientists from academia, industry, government, and international agencies. Scientists from 18 developing countries and 7 industrialized countries, as well as representatives of WHO and the Pan American Health Organization (PAHO) participated in the symposium. Whenever possible, papers in this proceedings were edited to reflect some of the discussion that they elicited.

We hope that this symposium has increased understanding of the issues and has helped create links between scientists from the South and their colleagues from the North, and that it may lead to interventions that will promote safer living and working environments for the people of developing countries.