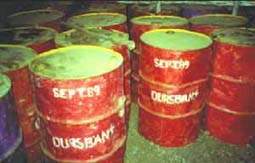 Having fulfilled its task of developing concepts for dealing with obsolete pesticides, the GTZ pilot project ended in October 1999 - and all concerned learned a lot.

At first, there were many skeptics in GTZ’s own ranks. Not only did the technical risks act as a deterrent, but many had doubts about the development-policy benefits of such disposal measures, and some objections were lodged against the use of public funds for cleaning up after other people. Now, though, this subject is being dealt with more openly in German technical cooperation, mainly because the project has been successful in finding comrades-in-arms.

By way of cooperative schemes, development cooperation is capable of coping with large stocks of obsolete pesticides.

Experience shows, however, that the search for suitable partners in cooperation is very time-consuming, and that some of the work ends up getting done twice. At today’s pace, it could easily take another 50 years to destroy all the old stocks of obsolete pesticides. Considering the desolate state of most stores, though, there is just not that much time left.

And so it is urgently necessary to better coordinate everyone’s efforts. One promising approach is to set up task forces, i.e., interdisciplinary, international bodies of experts. The FAO, for example, sent such a task force on a successful mission to Ethiopia: experts representing various disciplines explored the situation together and elaborated suggestions on what kind of further action to take.

As far as the highly competitive hazardous waste disposal business is concerned, GTZ pursues no such self-interest goals as the better utilization of existing hazardous waste incineration capacities in industrialized countries. Consequently, the project has continuously endeavored to find ways and means of waste disposal that can be implemented directly in the respective developing country.

A long time ago, it was demonstrated conclusively that pesticides can be incinerated in cement factories in developing countries. But it was not until 1996 that this approach advanced beyond the trial stage. Development of the waste introduction system (WIS) by the GTZ project, coupled with its pragmatic application in Tanzania, showed that the method really does work, even for large-scale activities.

Disposal in the developing country itself is a realistic option, as long as certain technical and political prerequisites are met.

In both Agenda 21 and the Basel Convention, the industrialized nations promised to engage in the transfer of know-how. As of this writing, the proven methods apply only to the incineration of nonhalogenated pesticides in cement kilns. By modifying such facilities, for example through the addition of a WIS in Tanzania, cement kilns can be rendered suitable for use in burning other forms of hazardous waste, as well. In view of the precarious waste-disposal situation in developing countries, this certainly amounts to a tempting option. From a political standpoint, though, it only makes sense as long as accompanying control mechanisms effectively preclude misappropriation of the incinerating facilities by unscrupulous profiteers.

Active promotion of technology centers in developing countries could help further the development of disposal techniques on a local basis. It would also make a good platform for propagating avoidance strategies, for, from a development-policy standpoint, disposal measures are only justifiable as one-shot schemes.

Post-disposal mechanisms designed to eliminate the causes of pesticide accumulation must come to bear.

The FAO’s Provisional Guidelines for the Prevention of Accumulation of Obsolete Pesticide Stocks, dating from 1995, provide an excellent guide. Concrete approaches for governments and development cooperation organizations, as well as for development banks, industry and users, were illuminated at the 3rd Intersessional Group Meeting at the Intergovernmental Forum on Chemical Safety (IFCS).

Unfortunately, disposal activities are still not being systematically tied in with prevention programs. All concerned should be seriously interested in not finding themselves in the same situation again a few years later. Thus, the planning of disposal measures should include the binding specification of preventive measures.

One goal of development cooperation is to help the partner countries introduce and monitor prevention programs. The creation of a legal framework and the voluntary conclusion of pertinent agreements are both equally conceivable. Likewise, organizational and technical infrastructure is required for monitoring and enforcing adherence to the respective rules and regulations.

In many developing countries, such prerequisites are just beginning to emerge. Often, there are not even any laboratories with the equipment needed for determining the quality of a formulation and comparing it with the given specifications. Equally often, the existing pesticide storage facilities lack the requisite minimum safety standards, and store management procedures are very inadequate and fragmentary. Many laws regulating the treatment of agrochemicals are still being written.

Madagascar, however, stands as an example of how much progress can be made with modest means. It is easy to see that Madagascar seriously intends not to repeat past mistakes. 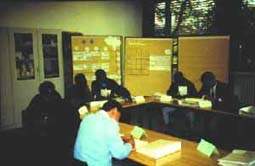 Training Course in Germany: Focus on the management of pesticide stores.

As many disposal schemes have shown, a large percentage of obsolete pesticides only became obsolete because the basic principles of proper inventory control were not adhered to. Naturally, the management of the store and any transportation involved must be legally regulated. But then one cannot always wait that long. Those responsible for agrochemicals in developing countries therefore welcomed the practical assistance which GTZ offered in 1995 in the form of a training course on “Management of Pesticides Storage and Transportation”.

A discussion among participants from seven developing nations of Africa and Asia identified the problem: Local infrastructure is usually very poor, and there is little awareness of how much damage can result from a lack of good store management.

The course’s main aim was to heighten the attendees’ awareness of both the hazards and the economic damage that can be done to people and the environment by inadequate inventory control and handling procedures. The participants learned modern methods of stockkeeping and safe handling of toxic chemicals. By way of practical exercises, it was successfully demonstrated that these techniques can be introduced in developing countries without major financial expenditures.

The School of Agriculture, Food and Environment (DEULA-Rheinland) conducted the training on GTZ’s behalf. Also participating were Germany’s three largest producers of pesticides, various carriers, and fire-prevention experts. The course was rounded off with a seminar on crisis intervention.

Cooperation is the key - with the mass media, for example, in order to get attention; and trade associations, international organizations and action groups are important, too. It is also important to cooperate with producers and government agencies. All this serves to generate sustainable networks. At the end of the course, the participants were ready to go home and serve as multipliers with the knowledge it takes to get such networks established.

Prevention of Obsolete Pesticides - A Proposal from Madagascar

· Overestimation of demand and requirements:

Locust invasions fail to materialize; the local population refuses to use DDT as a prophylaxis against malaria; remote villages cannot be reached for lack of vehicles; government-operated agricultural production facilities are shut down

In nearly half of more than 150 storehouses, the pesticides were found to have been placed on the floor instead of on pallets, and 80% of all stores had no stock lists

Either the pesticides themselves or their containers are of inferior quality and, hence, unmarketable