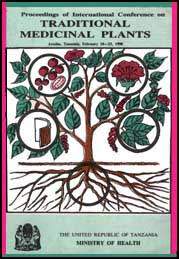 Long before Buddha, long before the advent of Jesus Christ, long before Mohammed, Marco Polo, Christopher Columbus, Vasco da Gama, and Captain James Cook..., the aboriginal people in Africa, Asia, North and South America, and the Central Pacific Islands, used concoctions prepared from a wide range of medicinal plants for treating their sick. In most cases, the information on what plant and what part of the plant cures what disease, in which precise locality it grows, when its curative potency is maximal, how it is prepared, and what dosage should be administered..., was passed on from father to son, and mother to daughter, by word of mouth and by practical field experience, from generation to generation.

But following the "discovery" of North and South America, Asia, Africa, Australia and New Zealand, and the slicing of Third World countries into fragmented pockets with European spheres of influence, the rich heritage of traditional medicinal practices was looked down upon, and branded as primitive. Yet, even in the North, and the West, many pharmaceutical drugs and medicinal syrups administered to patients in modern hospitals, are of plant origin. Indeed, in the Middle Ages (about 500 A.D. to 1450 A.D.), and also following the Renaissance, botany was a mandatory core subject studied by all those aspiring to study human and veterinary medicine.

It has been estimated that over 7000 medicinal compounds in the modern western Pharmacopoeia are derived from plants, and that over 100 pure chemical substances extracted from the higher vascular plants, are used in medicine throughout the world.

It is well established that the majority of the medicinal substances used to-day are extracted from vascular plants occurring in tropical rain forests, where over 50% of the world's vascular plant species are found. Unfortunately, however, the tropical forests, which cover less than 10% of the earth's land surface, are disappearing at an alarming rate, as Man cuts down trees from the forests to provide timber for housing and construction industry, to give room for more land for agriculture, to provide domestic fuel in the form of firewood and charcoal..., and other products whose shortage is caused by the human population explosion. The rapidly vanishing forests are disappearing with many species, some of which have unique curative potency for a wide range of human and livestock diseases.

Some of the endangered vascular plant species in Africa, Asia and Latin America may not possess known curative medicinal value now, but their loss means that our biosphere is being subjected to genetic and chemical impoverishment, since each species has its unique genome and chemistry, which may be useful for solving Man's medical problems of tomorrow. The need for a serious campaign towards the conservation and re-establishment of tropical rainforests, and other endangered ecosystems in Africa, Asia and Latin America, is certainly a must of the day.

But that is not all. The rich ethnobotanical and ethnomedical information in the Third World, which was passed on to us by the ancients, from father-to-son and mother-to-daughter, prior to the advent of European culture, is also vanishing fast. The traditional medicinemen and medicinewomen, like all of us, are given a life span of only three score years and ten. And, since the youths of to-day have a tendency to consider traditional medicinal practice as primitive and unfashionable, few opt to enter into apprenticeship with the practising and experienced healers, whom we are still fortunate to have to-day. Thus when the traditional medicineman or medicinewoman dies, he or she is gone with the rich invaluable information unrecorded. As Mark Plotkin of the World Wildlife Fund has put it, it is as if a library were burned down, and he adds that the situation is actually worse than that (i.e, the burning down of a library) because, if a library is burnt, most of the information can be retrived from other libraries. However, when a traditional healer dies, his or her knowledge is lost, and is lost forever. The need for establishing a close working relationship with the experienced traditional healers, and documenting their medicinal practices before it is too late, is thus one of most urgent, top priority, and critical activities which we must embark upon to-day.

In this historic conference of its kind, which took place in Arusha, Tanzania, many papers were presented by scientists of widely varied backgrounds: botanists, medical doctors, pharmacists, pharmacologists, chemists, traditional medicine practitioners, sociologists, etc. Poster presentations, and demonstrations of the medicinal plants used for the treatment of various ailments, were also arranged.

Amongst the scientific papers which were presented, some papers, for example indicated that there are good possibilities of developing new pharmaceutics, which are as effective for the cure of malaria as (if not better than) chloroquine. These are extracted from local plants which the village communities use for the treatment of malaria.

Some papers indicated that there are possibilities for developing medicinal substances which are effective for the treatment of asthma, using traditional medicinal herbs. One paper indicated good possibilities for developing the grapple plant, currently exported from Botswana, for the local production of tablets which are effective for the treatment of arthritis. All the participants asserted that traditional medicines should be promoted because of the following reasons:

First, modern medicinal drugs and syrups are becoming increasingly expensive and unaffordable. Indeed, in most cases many Third World countries are unable to meet the high medical bills involved in the importation of the medicines from the North. The countries of the North feel that they must keep the prices of their medicines high because of the exorbitant costs involved in research towards the development of new medicinal drugs, before the drugs are marketed to the international community. It has been estimated that, on the average, the development of a new medicinal drug takes about ten years of research, and costs about U.S $ 40.0 to U.S $ 200.0 million before the marketing stage. A proportion of the prices for the imported drugs apparently goes into the recovery of the initial monetary investments. But this is not always the case. I shall elaborate.

In Botswana, the root tubers of the grapple plant, Hypogophytum procumbens, are sold at 2.0 pula per kilogramme (Botswana currency). The dried tubers are exported to the North, where they are processed into tablets, presumably with no additional ingredients. But when the tablets from the plant are imported back into the country for use as a cure for arthritis, and other ailments they are sold at 213.25 pula per kilogramme. That is, indeed, the pattern throughout the Third World: exporting the dried medicinal plants at an exceptionally low price, and importing the packaged and coated processed medicine at an outrageously high and unaffordable price.

Secondly, it was pointed out that the modern medical facilities in the Third World are inadequate, or totally lacking, in the remote villages, far inland. In most cases, therefore, some 60% - 80% of the inhabitants of rural areas rely on traditional medicinal practices. It is thus important for the respective Governments of Third World countries to recognise this fact, and to come out with solutions on how the traditional medicinemen could be assisted towards administering their medicines at appropriate dosages, and how the scientists in our Universities and various research institutes could collaborate with the traditional medicinemen, and to assist them towards extracting the potent curative substances, with the use of appropriate solvents, where water alone will not do.

Thirdly, many examples are known whereby patients could not be cured with modern medicines, prescribed by some of the best trained modern physicians, and whereby the patients regained vitality, and were completely cured, after being referred to the traditional healers. There is thus a big scope for modern Western-trained health practitioners to learn from the traditional medicinal practices. The cure of malaria by using quinine was, for example, developed from traditional medicinal practices, as will be highlighted in one of the papers included in the proceedings.

We hope the reader will find the information in this document enriching, both culturally and scientifically. We believe also he/she will be interested in making direct contacts with the authors of the various papers, and seek for more information on the various ideas expressed. We believe the reader will particularly be enriched by the messages from the Chairman of the South Commission, His Excellency, Mwalimu Julius K. Nyerere; the President of the United Republic of Tanzania, His Excellency, President Ali Hassan Mwinyi; the then Minister of Health, Honourable Dr. Aaron Chiduo, M.P.; the Director of the World Health Organization (Regional Office for Africa), Dr. G.L. Monekosso; and the then Principal Secretary in the Ministry of Health, Ms Zahra Nuru. The resolutions and recommendations which emanated from the conference, are also likely to be of interest to many. We hope the reader will support all the efforts aimed at developing sustainable programmes which will promote the conservation of our valuable tropical plant heritage, through intensified afforestation, the establishment of gene banks for the endangered species, and initiating stern control measures against indiscriminate exploitation of medicinal plants for export to the North.

Finally, we hope that through the new contacts that have been established between scientists from Africa, Asia, and Latin America, comprehensive collaborative programmes on the utilization, chemical extraction, identification, characterisation and pharmacological testing of medicinal substances from various medicinal plants found in the Third World, will be established, and that these will yield fruitful results.