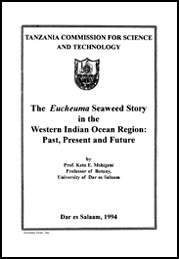 Historical Background on the Eucheuma Seaweed

(9) To-date the following species of Eucheuma have been confirmed in the Western Indian Ocean region: