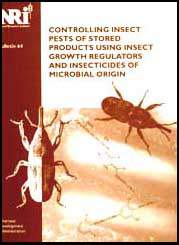 Where appropriate, the various methodologies used in the evaluation of each IGR are described. Most trials have been laboratory-based. The methods used to apply IGRs can be classified into the following three groups: topical application, admixture to food media and application to surfaces.

For topical application, 1-100 µg of IGR are applied in solvent to the insect body. Various solvent carriers in volumes between 0.03 µl to 2 µl are used. For the admixture of IGRs to insect food media, widely differing volumes of various solvents have been used. Generally, the treatment is applied directly to the food medium, although the compound is occasionally applied, in solvent, to the glass above the commodity in the treatment vessel. Distribution of active ingredient (a.i.) is achieved either by mechanical tumbling followed by controlled solvent evaporation, or by manual mixing followed by natural evaporation over 18 hours. An IGR in solvent may also be directly applied to paper or cardboard, but this is a method which is rarely used.

Many of the IGRs examined in this review have remained at the preliminary evaluation stage, whilst others have been approved and used commercially against insect pests. Cross-referencing of data for a particular compound is often difficult because various registration numbers have been issued by different chemical companies. It is possible that some of the registration numbers quoted may have been superseded as a result of a substance having being withdrawn by its manufacturer. As they form only a small fraction of the insecticide market, it is unlikely that substances will be evaluated solely as grain protectants.