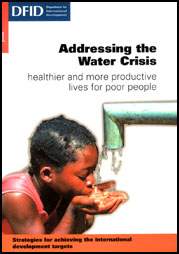 The Department for International Development (DFID) is the UK government department responsible for promoting development and the reduction of poverty. The government elected in May 1997 increased its commitment to development by strengthening the department and increasing its budget.

The central focus of the Government's policy, set out in its first White Paper on International Development in 1997, is a commitment to the internationally agreed target to halve the proportion of people living in extreme poverty by 2015, together with the associated targets including basic health care provision and universal access to primary education by the same date. The government's second White Paper on International Development, published in December 2000, reaffirmed this commitment, while focusing specifically on how to manage the process of globalisation to benefit poor people.

As well as its headquarters in London and East Kilbride, DFID has offices in New Delhi, Bangkok, Dhaka, Kathmandu, Nairobi, Dar-es-Salaam, Kampala, Harare, Abuja, Pretoria, Suva, Bridgetown and Montserrat. In other parts of the world, DFID works through staff based in British embassies and high commissions.