Rajkot city has all basic services like water supply, sewerage, street light, roads and solid waste management. All the services are being well maintained. However, because of the rapid expansion of the city, the services are inadequate. The augmentation of all the services has been taken up by the RMC. However, because of certain constraints, RMC is not in a position to fulfil the present demand for basic services. The main constraint is water, for which no reliable source is available for the city as a whole. During 1999 the city is facing one of the most acute crisis it has ever experienced for water and a Rs. 800 million city water supply augmentation project is under implementation. An overview of the city's infrastructure services is given in Table 3.2.

Table 3.2 Existing Facilities and Services at a glance

The RMC has sanctioned and implemented piped water supply extension projects in 66 slums in Rajkot. In addition, other provisions include roads, street lights and disposal of waste water in almost all the slums with financial assistance from the Gujarat Financial Board, MLA grant, MP grant etc. Subsequently, about 10 slums have been developed where RMC is also providing infrastructure facilities. Because of being a main trade and industrial centre, the migration from rural areas to Rajkot is very high and this has increased the pressure on basic services. The main problem of slums is proper shelter. Most of the slum population is residing in kutcha or semi-pucca shelters. To ease this situation the RMC has implemented a housing scheme for socially and economically weaker sections of society with financial loan assistance from HUDCO. 3012 EWS housing units have been constructed under this scheme. 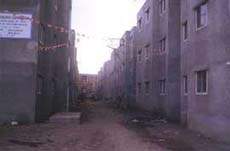 Slum families have happily shifted to these fully serviced, one room flats. 3012 such units have been constructed with HUDCO financing. Recovery of instalment repayments from households is also progressing smoothly.

The basic problem of the city is severe encroachment on municipal land by the urban poor, inadequate water supply, frequent power cuts, and illiteracy. Concerted efforts are being made by RMC to tackle these problems.

Regarding the management of solid waste, the RMC has introduced privatisation in the transportation of garbage. To keep the environment clean the RMC has implemented a project with financial assistance from HUDCO as well as the World Bank. The solid waste is being disposed near Sokhda village where no scientific treatment is being given. However, the RMC is negotiating with some leading companies for implementing a scheme for scientific disposal of city solid waste.

As stated earlier, most of the slums within the city limit are still in need of improvement in their basic services provision namely: water supply, sewerage, health facilities, primary education etc. To improve infrastructure facilities, RMC has introduced the UBC and ICDS programmes in two slums. Under the UDC Programme, RMC has constructed Community Development Centres in which various activities like sewing classes, cooking classes, embroidery and handicraft classes etc. are arranged by the Project Officer. Under the same programme, the poor are being provided loans for small business and other self-employment activities. 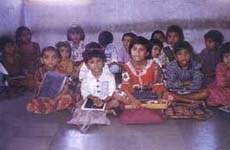 Attendance is high for pre-school education conducted daily in the community development centres. Teachers are invariably women from the same slum.

Similarly, in the ICDS Programme, the main target is children upto the age of 5 years. They are being provided supplementary nutrition, immunisation, pre-school education etc.

The RMC has also set up five dispensaries in which full time doctors and para-medical staff have been appointed. Treatment and medicine is free and various health camps are also being arranged with the help of local NGOs. The RMC has also started a medical service through a mobile dispensary which is run by an NGO. Other national and state programmes for slum upgradation, poverty alleviation, education etc. are also being implemented regularly.