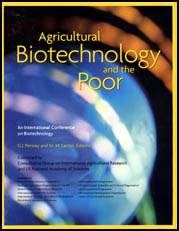 The eradication of poverty and hunger in developing countries represents a major challenge that is dependent on agricultural productivity and the discerning application of science and technology to ensure the health of people and environments globally. To explore these issues, an international conference focused on biotechnology and its potential impact on agriculture in developing countries was held at the World Bank in Washington, D.C., on October 21-22, 1999. The conference was convened by the Consultative Group on International Agricultural Research (CGIAR) and the U.S. National Academy of Sciences (NAS), and was cosponsored by: Biotechnology Industry Organization, Food and Agriculture Organization, Global Forum on Agricultural Research, International Council for Science, International Fund for Agricultural Development, Third World Academy of Sciences, UN Development Programme, UN Educational, Scientific and Cultural Organization, UN Environment Programme, UN Industrial Development Organization, and the Union of Concerned Scientists. We welcome the partnership with such a distinguished group of organizations in addressing these challenging issues of science and policy.

A steering committee comprised of Andrew Bennett, Department for International Development, U.K., Charlotte Kirk Baer, Board on Agriculture and Natural Resources, The National Academies, Joel E. Cohen, Rockefeller University, Nina Fedoroff, Pennsylvania State University, Timothy Reeves, Centro Internacional de Mejoramiento de Maiz y Trigo, and Donald Winkelmann, CGIAR Technical Advisory Committee, worked successfully to develop the conference program. The program was; structured to draw from expert presentations as a basis for discussion, as well as sessions that were designed to encourage interaction and exchange of ideas on the challenges, opportunities, and constraints of biotechnology and its impact in developing countries.

The conference responded to the pressing need for an open, inclusive, and participatory debate on potential benefits and risks of biotechnology, grounded in scientific evidence, and concerned with the common good. Science-based discussions such as this one are critical in guiding the strategies of the international agricultural research centers of the CGIAR as they mobilize, in collaboration with their partners, cutting-edge science to combat poverty, hunger, and environmental degradation in the world’s developing regions.

Over 400 people attended the conference, which was global in scope. Participants included representatives from the national research organizations of developing and industrial countries, nongovernmental and community-based organizations, the private sector, senior policymakers, academics, scientists, international agricultural researchers, development communicators, and media. Diverse technological, environmental, public health, economic, ethical, and social viewpoints were actively sought so that linkages could be explored. Our hope was that the elements of future activities could emerge that are directed specifically toward the needs of small farmers and consumers in developing countries.

In his welcoming remarks, E. William Colglazier, Executive Officer of the U.S. National Academy of Sciences, outlined the key objectives of the conference: to broaden awareness of developing countries’ views on issues related to biotechnology, and to contribute to a science-based understanding of the issues and public concerns and how these might be addressed. NAS member R. James Cook provided closing remarks including his perspectives and summary of the conference discussions. CGIAR co-convenor representative and World Bank Rural Development Department Director Alexander McCalla spoke on behalf of the CGIAR. Their insights provided a valuable synopsis of the event.

The coming together of our two organizations to convene this conference, in partnership with a distinguished and varied group of cosponsors, has shown the value of partnership when attempting to identify the challenges and opportunities that modern science presents through the tools of biotechnology. We hope that this volume will serve as a cornerstone for building on our current knowledge, as we head into the new century with a renewed determination to ensure food security, protect the environment, and reduce poverty in all developing countries.