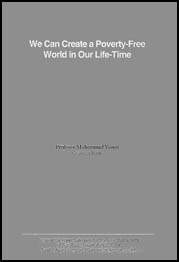 We Can Create a Poverty-Free World in Our Life-Time

It is a great honour for me to receive the prestigious Tun Abdul Razak Award on behalf of nearly two million borrower-share-holders and over ten thousand staff of Grameen Bank. In giving this honour to Grameen Bank, not only do you endorse its philosophy and achievements, but you also express your solidarity with the dreams it harbours in its heart.

Malaysia has been a close collaborator of Grameen Bank for a long time now. Malaysia was the first country which studied Grameen thoroughly and decided to bring it to its own people. Not only did Grameen come to Malaysia through Amanah Ikhtiar Malaysia and Projek Usahamaju, it expanded and flourished throughout the country and touched many lives. Malaysia became an inspiration and training ground for many countries around the world. Kuala Lumpur now hosts the headquarters of CASHPOR, the network of all Grameen programmes in Asia.

By honouring Grameen Bank with your prestigious award you honour thousands of young people in Grameen Bank who have committed themselves to eliminating poverty in their own areas by reaching out to poor persons on a one-to-one basis, by helping each person to discover her own potentials and creativity which would otherwise remain unexplored by her for ever because of the unsupportive environment around her. Thank you for recognising their superb dedication.

Grameen has been a thrilling experience for us all along. In the seventeen years of its existence we have never run short of myths to explode and were able to shake loose certain well-entrenched principles which create misery for people yet are not noticed or questioned.

We were told again and again that the poor are not creditworthy; banking cannot be done with the poor. We dared to question the basic principle of collateral-based banking. Today after crossing the first billion dollars (US) in tiny loans to the poorest people in Bangladesh and maintaining a recovery record of over 98 per cent during all the years of its existence, Grameen poses an altogether different question: are the conventional banks people-worthy?

We were told by economists, planners, experts, that even if it is possible to lend money to a handful of poor people in half a dozen or so villages and get the money back, surely this cannot be scaled-up to reach out to any significant number of villages or poor people. One planner predicted in our very early years that if we tried to expand our work, the whole thing would explode into non-existence. We dared to expand our programme, and expand at great speed. We are still in existence, and in good health. Today we work in 34,000 villages of Bangladesh, which has a total of 68,000 villages. We operate through 1,042 branches with over ten thousand staff. We disburse between US $ 30 million to US $ 40 million each month and collect, as repayment, an almost similar amount each month. We feel stronger today than we did ever before.

We were told that if we wanted to help the poor families we should lend money to the male head of the family. Instead we went for the women in the house, who usually had no experience in earning money. Poor women with tiny loans turned out to be the best fighters against poverty. Today, out of two million borrowers of Grameen Bank, 94 per cent are women.

We were told that tiny loans (around US $ 100) would not create enough income to change the poverty status of a family; poverty alleviation is much more serious a business than to be achieved through tiny loans.

Today, studies show that Grameen borrowers steadily improve their lives and within ten years half of them cross the poverty-line, another 27 per cent come very close to crossing it. Besides increase in income, studies show that the families of Grameen-borrowers perform better than non-Grameen families with regard to nutritional status, child mortality, adoption of family-planning practices, housing, availability of safe drinking water, sanitation etc.

We were told that Grameen Bank will always be a sick bank - dependent on grant money or cheap money from the donors. We have proved beyond anybody’s doubt that Grameen Bank is not only a sustainable enterprise, it is perhaps the most sound financial institution in Bangladesh.

These are only a few examples of what the experts told us, and how the reality turned out. Now we find it difficult to put our trust in the advice of the experts. Instead, we have started believing that the elimination of poverty is a feasible proposition and that there is no reason whatsoever why any one person should remain poor on this planet. We are convinced that we can create a poverty-free world in our lifetime if only we seriously want it. Credit for the poor can play a vital role in making this dream come true. Grameen experience has demonstrated this in a concrete way.

We believe that every human being, irrespective of his/her economic situation, is endowed with capabilities not only to take care of himself, he/she has the potential to contribute to the enhancement of the quality of life of all other fellow human beings.

It is a great waste to let a human being remain poor and unfulfilled. With over one billion people suffering from the misery of absolute poverty, each day we are wasting creativity and productivity which could have made this world a better place to live for all of us. To avoid this we must pay serious attention to our national priorities and the business philosophy and methodology of the multilateral, regional and national financial institutions. If we can change them in the right way we can free the world from poverty.

It is the responsibility of every society to make sure that each member of that society lives with full human dignity. But poverty takes away dignity from a person. It is time that we take our responsibility seriously and commit ourselves to eliminating poverty once and for all.

Yours Excellencies, Ladies and Gentlemen,

By recognizing Grameen Bank, Tun Abdul Razak Award Committee has given visibility and urgency to the cause of poverty alleviation. I strongly feel that this will bring the dream of creating a poverty-free world closer to reality by inspiring decision-makers to embark upon determined actions.

I take this great opportunity to express our deep gratitude to the government and the people of Malaysia for giving us the honour of receiving the prestigious Tun Abdul Razak Award. On behalf of all of us in Grameen Bank I wish to assure you that because of the honour you have given us we’ll work harder, to bring about changes faster in the lives of the poor.

Thank you, Your Excellencies, ladies and gentlemen.