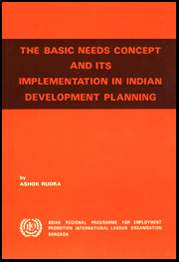 The Basic Needs Approach has figured prominently in development literature in the last few years. Its more ardent advocates have also projected it as a new approach to the development problems of the Third World. While there are many interesting and useful ideas implicit in this approach which need to be explored and investigated, this tendency to acclaim it as a new discovery is neither firmly founded on facts nor likely to help very much in its implementation. For, in one form or another, the objective of meeting the basic needs of the people has been there all along in most countries which have attempted to formulate their development programmes and policies in a systematic way. What requires careful consideration is why they have in most cases failed to achieve this objective, how precisely it has been possible to make significant progress in some cases, and what lessons can now be learnt for the future from this past experience.

Since India is one of the countries in which the implications of building basic needs into development planning were worked out fairly rigorously more than 15 years ago, it stands out as a good candidate for a close and critical examination of the record since then. We were fortunate in persuading Professor Ashok Rudra of the Indian Statistical Institute to undertake such an examination. He was closely associated in the 1960’s with the work of the Perspective Planning Division in the Planning Commission (which was primarily responsible for the pioneering work on basic needs in India), and is now in a position to look back and assess the subsequent experience with some detachment, Professor Rudra’s analysis, which is both perceptive and provocative, will be therefore of considerable interest to students of development literature in general as well as to practitioners called upon to formulate policies and programmes for achieving basic needs targets.

It is our hope that Professor Rudra’s contribution will also evoke studies in depth of earlier experience in other countries of the region (as well as in different parts of India itself) since, as he himself has pointed out, there have been differences in objective conditions and in social consciousness and several pertinent questions can be raised to which the answers are by no means clear. Only through such country-specific studies, taking into account all the relevant political, cultural, social and historical elements which go into development planning, can the Basic Needs Approach be prevented from deteriorating into a slogan devoid of substance and which might even be used for pursuing objectives very different from what is professed.

We are grateful to Professor Rudra for the time and energy he has devoted to the preparation of this brochure. We would also like to place on record our deep sense of appreciation of the devotion and care with which Miss Ubol Watanapisit has typed the script several times over and prepared the final version for printing.