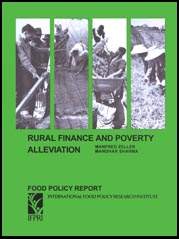 Policymakers, advisers, and managers have not reached consensus about how governments should intervene in and regulate the rural financial sector. Some argue that a microfinance institution should be a purely financial institution, functioning under the principle of full cost recovery. Performance should be measured not just by the extent to which current costs are fully recovered, but also by the cost recovery that would have taken place had all types of subsidies been eliminated. Only then, they say, is there any prospect for sustaining these services over the long run, when subsidized funds from donors and governments have dried up. If the poor are unable to make profitable use of financial services priced at full cost, then these services ought not be used as instruments for poverty alleviation. This line of argument implies that public resources could be better used in other poverty alleviation activities, since well-run financial institutions should be able to service the poor and maintain adequate financial returns. Banco Sol in Bolivia and the village banks (Unit Desa) of the Bankya Rakyat Indonesia (BRI) are often cited as good examples.

But this kind of advice clashes with real world experience where most microfinance institutions that serve the poor, including well-known ones such as the Bangladesh Rural Advancement Committee (BRAC) and the Grameen Bank in Bangladesh, depend on subsidies from national governments and international donors.12 The arguments for committing public resources to rural financial institutions are made on two grounds: market failure and poverty alleviation.

In the past, the development and spread of financial institutions were suppressed by excessive state interference, such as rigid exchange rate regulations and caps on interest rates. Today, it is widely recognized that the basic roles of government are to establish macroeconomic stability; to ensure that financial markets are free to respond to economic incentives, while following prudential banking practices; and to maintain and enforce a legal framework that ensures contract compliance. However, while a liberalized financial market is a necessary condition for improving the supply of financial services to the poor, it is not sufficient in itself. Market liberalization alone has not been able to trigger innovation in new financial instruments that reduce transaction costs for the poor.13 This is because rural financial markets of developing countries have inherent problems that make investments risky and costly.14

· Since most of the clients derive their incomes from agriculture, they all tend to want to borrow at the same time, say in the preharvest season, and to save immediately after the harvest. This makes it difficult for the financial institutions to diversify their portfolios.

· Information about potential borrowers is difficult to obtain, especially when they are scattered, making loan applications costly to evaluate.

· The poor own few assets, making it in-feasible for the financial institution to secure its lending with collateral.

Typically the lender must spend time and resources on assessing the creditworthiness of the loan applicant and seek alternative forms of collateral. Given traditional techniques of lending, these costs often prove excessive. As a result, commercial banks shy away from rural clients altogether, limiting their services to the urban or periurban economy, where information on prospective borrowers is less costly to obtain and transaction volumes are larger. There is little evidence, as yet, that financial institutions in the private sector are willing to invest resources to devise profitable savings and loan services for the rural poor.15

Improvements in literacy, household incomes, communication infrastructure, advances in banking technology and telecommunications, and financial sector reform are likely to decrease transaction costs in the future. While it may be best for private banks to wait until conditions for investment are favorable, waiting may not be the optimal government policy. Institutional innovations that reduce the cost of service delivery and improve its usefulness for the poor are essential for enhancing the efficiency and long-run sustainability of rural financial programs. This provides a strong reason for directing public resources toward policies that generate institutional innovations in the rural financial sector. There will be even more payoffs if these innovations, which are in the nature of public goods, are eventually adopted by private sector financial institutions to profitably provide services to the poor.

The second argument for committing public resources to rural financial institutions is that provision of financial services is a potent tool for poverty alleviation, and public resources are called for to deliver these services to the poor.16 Institutions such as the Grameen Bank or the Malawi Mudzi Fund receive a significant amount of public resources. Their clients are much poorer than the clients of Banco Sol or the BRI, and it is likely that the poorest of them would be left out if they had to pay for services at full market prices.

Managers of microfinance institutions in Asia and Africa often find that providing financial services to the poor is not enough to attract the poorest clients because of the many constraints they face. Credit may offer low returns to investment for households that own tiny plots of unirrigated land of low productivity, especially when they are illiterate, in ill health, or lacking experience in high-yielding agrotechnology or nonfarm microenterprises. For these reasons, institutions such as Freedom from Hunger in Ghana and BRAC and the Grameen Bank in Bangladesh offer financial services in combination with other complementary services, such as basic literacy programs, training in enterprise management, and education in nutrition, health, and family planning that are likely to increase the productivity of the loans provided.

What then is the case for allocating public resources to rural financial institutions for poverty alleviation? Is there a case for combining credit services with other kinds of services? Are these hybrid programs more effective in reducing poverty than minimalist credit programs? The answers depend on the potential impact of financial services on poverty and how they compare with other means of reducing poverty. Clearly, if an additional dollar spent on a credit-based program reduces poverty by a greater amount than a dollar spent on another poverty reduction program, then there is a case for redirecting resources to credit-based programs. Measuring the effects of these programs on poverty alleviation is therefore an important step toward better informed decisions. But making impact assessments is by no means straightforward, since a host of other factors that affect poverty have to be carefully controlled for. This is especially difficult in the case of hybrid programs where disentangling program credit effects from noncredit effects can itself be daunting. Nonetheless, recent years have witnessed a number of research undertakings that have made progress toward measuring impact (Box 1).

The results from IFPRI’s own research program also point to generally (but not uniform) positive effects of credit on income, technology adoption, and food consumption (Table 2).17 Households with improved access to credit are better able to adopt technology, increase their incomes, and improve food expenditures and calorie intake than those who do not have access to credit. However, the effects on nutritional status, an important indicator of poverty, are not clear.

Table 2 - A summary of positive or negative effects of credit access on welfare, by country

Source: Econometric results are presented in individual country reports and other publications listed in note 1.

a No significant effect on caloric intake was found, but 75 percent of the households already met at least 80 percent of total caloric requirements.

b Regressions were run separately for each major type of credit program. One credit program showed positive effects on preschooler height-for-age. The results for two other programs were not significant.

Access to credit or participation in a formal credit program positively affected household income in four of the five countries where such an assessment was made. The study in Malawi, however, did not indicate such an impact, possibly because the Malawi survey coincided with an exceptionally bad harvest year due to inadequate rainfall. Studies in Madagascar and Pakistan, which specifically examined the effects on input use, concluded that improved access to credit increases the use of agricultural inputs, especially fertilizer and improved seed. In three out of four countries, credit access had a positive effect on total food expenditures (Bangladesh, China, and Pakistan). Credit was also found to reduce consumption variability in Bangladesh and Nepal. The effect on calorie intake, on the other hand, was not significant in two of the five. No relationship between the nutritional status of children and access to a credit program was found in any of the country studies, probably because good nutrition is the product of a complex interaction between food intake and other factors such as access to safe water and sanitation, access to health services, and nutritional knowledge of caregivers.

Current evidence therefore indicates that, overall, the effects of credit programs on welfare can be significant under many but not all circumstances. What needs more evaluation in the future are the program costs incurred and the resulting ratios of benefits to costs.24