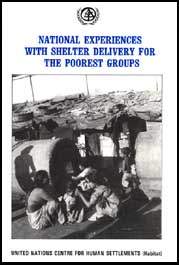 B. An integrated urban shelter strategy for the poor

Evidence from a variety of urban shelter projects and programmes in the major cities of Mexico, Indonesia and India underlines the extreme difficulty inherent in reaching the goal of environmentally sound settlements and of facilitating a process of improved shelter for the poor. The following are reflections based on experiences from the three case study countries. A large group of the poor cannot achieve improved shelter without new economic activities increasing their income (UNCHS, 1993a; forthcoming). Upgrading of slum areas' infrastructure and basic services and development of new land for low-income housing cannot to a sufficient degree be reached without the participation of the residents themselves in organization, work and financing. It is thus essential to view shelter as a productive investment in a long-term perspective. The income multiplier of low-cost house construction is relatively good. Furthermore, this kind of shelter production uses a greater proportion of locally-made materials, higher labour to capital ratios and smaller amounts of imported machinery than formal house-building. For governments to support and make the right environment for investments in shelter for the poor is economically rational indeed. Since the provision of shelter is an economic activity with a very high labour input, it should be possible to promote both housing and employment goals simultaneously, through a common strategy (UNCHS, forthcoming).

Urban poverty should be reduced through employment generation, particularly for women, in the provision and improvement of urban infrastructure and services and the support of economic activities in the informal sector such as repairs, recycling and small commerce. Small-scale entrepreneurs can - given less stringent rules and regulations and some technical and financial assistance - contribute to economic growth and the creation of employment. Governments have an important role in providing land and the overall framework in which the private small- and large-scale enterprises may operate efficiently. Furthermore, labour-intensive public works tend to employ the poorest workers. Even relatively simple drainage and earth works can generate a reasonable amount of employment for the unskilled. Assistance in the form of small loans to home-based enterprises will also be of value for the poor and for women (UNCHS, 1993a; forthcoming). Rules that inhibit economic activities within the home should be removed. Shelter may thus prove to become a major component in a community-based strategy to mitigate urban poverty. This has up to now not been adopted as a strategy. Shelter has been, and to a large extent still is, regarded rather as a consumption good, a cost to governments. Investments in upgrading and shelter for the poor are supporting informal economic activities. Such investments have a very low import component, thus demanding little, if any, foreign exchange. The widely held view that such investments should be regarded as welfare expenditures absorbing rather than creating resources, has no basis in fact (UNCHS, 1987; forthcoming).

The aim must be for governments to find the right balance between market liberalization and deregulation on the one hand and intervention on the other. There should be a division of labour between CBOs and local authorities. Public works on basic amenities in the slums should be offered to small contractors and temporary employment given to the poor at low pay. This must, however, be limited in scope and duration so as not to increase exploitation of non-unionized and weak workers. In addition to public works and small communities' own efforts in settlement upgrading, various economic activities should be stimulated in a planned way. This will provide local multiplier effects enabling poor people to invest more in their shelter, thus increasing further the economic circulation locally. An integrated urban shelter approach is necessary if the indecent and unhealthy living conditions are to be alleviated. The strategy has to be applied on a very large scale to have any visible impact on the enormous existing need.

Poverty is on the increase in the three countries, as in other developing nations, in absolute numbers. Urban poverty is rising even faster, and the urban population is becoming a larger and larger proportion of the total population. The urban shelter problem is so complex that only an extraordinary and combined effort by government authorities at different levels, the private sector, national and international NGOs and people themselves will have any chance of success. This does not imply that individual programmes and projects should be large-scale (UNCHS, 1991c). Rather, smaller, locally-adapted projects should be developed on the basis of real experiences from various parts of the developing world. The experience is that large-scale relocation programmes are difficult to manage and have negative social effects. Smaller-scale projects are more flexible allowing collaboration between residents, NGOs, the private sector and public agencies towards an adaptation to different local conditions and shelter and settlement goals (UNCHS, 1991f).

“Specific programmes aimed at assisting low-income groups, particularly those residing in slums and squatter settlements, can only be successful if framed within a comprehensive shelter strategy that lists priorities, identifies affordable approaches, makes provision for the fair allocation of resources and eliminates the contradictions between its various sector components and programmes.” (UNCHS, 1991a).

Community participation in shelter and settlement programmes is vital because, among other things, poor people's priorities are often misrepresented by well-intentioned planners and administrators due to the complex social and economic reality of the urban slums (Azad, 1988). Furthermore, the input even very poor people can provide in terms of planning, implementation and monitoring should not be ignored. Community participation can go a long way in reducing the following common problems: lack of proper identification of beneficiaries; lack of information and communication between the implementing agency and beneficiaries, leading to petty corruption by intermediaries; lack of knowledge of details of building standards etc., among the residents; lack of acceptance by the local people of, for instance, house demolishing to make space for roads and water supply; and lack of control of contractors resulting in delays of implementation. Community participation should thus be incorporated into the very design of urban management programmes (UNCHS, 1991e).

About 1500 million people live in urban areas in the developing world (the figure was 1360 million in 1990 and will reach 2000 million by the year 2000). The economic forces driving urbanization will continue to operate in the years to come. Governments have so far failed to ensure that the rapid urban growth is accompanied by sufficient investments in physical and social infrastructure, especially in the poorer areas. The result is an escalation of over-crowded, illegal and unhealthy settlements. Individual and collective efforts in the urban slums, although in many cases and respects remarkably successful, cannot solve many of the major and necessary tasks, such as water supply, sewerage and drainage, health services and land regularization. Water contaminated by toxic and other hazardous waste will be an increasing danger to the health of the urban poor in particular. It must also be expected that, for instance, the further growth of deteriorated and overcrowded rented accommodation will worsen an already violent social situation. It is estimated that at least 600 million people live in life- and health-threatening communities and dwellings in urban areas of the developing world (Hardoy and Satterthwaite, 1989; Cairncross 1990). The sheer size of the urban slum and poverty problem in most developing countries makes a solution depend on international assistance of an exceptionally high magnitude.