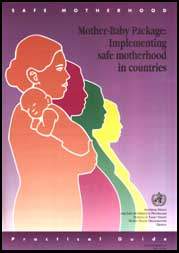 1 These definitions are not to be considered as official WHO definitions but are provided as a guide to be used with this document.

Abortion is termination of pregnancy (expulsion or extraction of embryo/fetus) before 22 weeks of gestation or below 500 g weight of fetus.

Premature detachment of the placenta, often attended by shock, oliguria and fibrinogenopenia.

Anaemia in pregnancy is defined as a haemoglobin concentration of less than 110g/l.

Bleeding from the genital tract occurring after the 20th week of pregnancy but before delivery of the baby.

Birth asphyxia is characterized by absent or depressed breathing at birth.

Abdominal delivery of the baby by laparotomy and section of uterus.

A clean delivery is one that is attended by health staff in a medical institution or by a trained birth attendant at home observing principles of cleanliness (clean hands, clean surface, clean cutting of the cord).

Convulsions, sometimes followed by coma, occurring in a pregnant or puerperal woman and associated with pre-eclampsia.

In the context of the Mother-Baby Package, a hospital is a health facility performing all of the essential obstetric functions listed on pages 12-13. It is synonymous with first referral level - the district or subdistrict hospital.

A diagnosis of hypertension in a pregnant women is made when the blood pressure is 140/90 mmHg or greater, or there has been an increase of 30 mmHg systolic or a 15 mmHg diastolic rise over baseline values on at least two occasions, six or more hours apart. A differentiation should be made between pregnancy-induced hypertension (which occurs without a previous history of hypertension) and that associated with pre-existing hypertension.

A maternal death is the death of a woman while pregnant or within 42 days of termination of the pregnancy, irrespective of the duration and the site of pregnancy, from any cause related to or aggravated by the pregnancy or its management but not from accidental or incidental causes.

The maternal mortality rate is the number of maternal deaths per 100 000 women of reproductive age.

The maternal mortality ratio is the number of maternal deaths per 100 000 live births.

“A midwife... has successfully completed the prescribed course of studies in midwifery and has acquired the requisite qualifications to be registered and/or legally licensed to practice midwifery. She must be able to give the necessary supervision, care and advice to women during pregnancy, labour and the postpartum period, to conduct deliveries on her own responsibility and to care for the newborn and the infant.

This care includes preventive measures, the detection of abnormal conditions in mother and child, the procurement of medical assistance and the execution of emergency measures in the absence of medical help. She has an important task in health counselling and education, not only for the women but also within the family and community. The work should involve antenatal education and preparation for parenthood and extends to certain areas of gynaecology, family planning and child care. She may practise in hospitals, clinics, health units, domiciliary conditions or in any other service.”

Number of deaths among live births during the first 28 completed days of life per 1000 live births.

A labour in which progress is arrested by mechanical factors and delivery often requires caesarean section.

The number of deaths of fetuses weighing at least 500 g (or when birth weight is unavailable, after 22 completed weeks of gestation or with a crown-heel length of 25 cm or more) plus the number of early neonatal deaths, per 1000 total births.

A placenta which develops in the lower uterine segment and may partially or completely cover the internal os. Painless haemorrhage in the last trimester is the most common symptom.

Defined as the loss of 500 ml or more of blood from the genital tract after delivery of the baby. In anaemic mothers, a lower level of blood loss should be the cut-off point for starting therapeutic action.

A condition in pregnancy manifested by hypertension, oedema and/or proteinuria.

Premature rupture of membranes (at term or pre-term):

Rupture of the membranes before the onset of labour.

Less than 37 completed weeks of gestation.

Active labour with regular uterine contractions for more than 12 hours.

Prolonged rupture of the membranes (regardless of labour status):

Rupture of the membranes for more than 12 hours.

Infection of the genital tract occurring at any time between the onset of rupture of membranes or labour and the 42nd day postpartum in which, apart from fever, one or more of the following are present:

The arrangement (in a maternity unit) that allows the mother to be with her newborn at all times, without interruption.

A safe delivery is one where the birth attendant monitors progress to avoid prolonged labour and to detect obstructed labour which can lead to haemorrhage, infection and shock in the mother and birth asphyxia and brain damage in the infant.

This means utilizing the mother as a heat source for the baby. The method consists of placing the baby (naked except for a diaper) on the mother’s chest and covering them. It facilitates early breast-feeding.

The death of a fetus weighing at least 500 g (or when birth weight is unavailable, after 22 completed weeks of gestation or with a crown-heel length of 25 cm or more), before the complete expulsion or extraction from its mother.

Unsafe abortion is defined as a procedure for terminating an unwanted pregnancy either by persons lacking the necessary skills or in an environment lacking the minimal medical standards, or both. An abortion can be considered as unsafe when it is performed under circumstances in which there are risks of morbidity and mortality over and above those inherent in the procedure when performed under optimal conditions - that is, under conditions of asepsis and with appropriate technical skills and equipment.