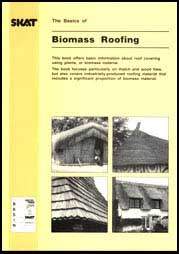 Hundreds of species of grass are used extensively for roofing throughout the world. Although the superficial appearance of grass thatched roofs differs according to the skill of the thatcher and local building traditions, there are only two fundamentally different methods of thatching with grass. The first uses grasses which have stiff, cylindrical stems. In the hands of a skilled thatcher the resulting roof may last up to 70 years. The second uses grass leaves which are flat and pliable; this soft-stem thatch rarely lasts more than 15 years.

Thatch is suitable for most climatic conditions as it offers excellent insulation against heat and cold. Its main disadvantage is that it is combustible and fire spreads easily between closely spaced thatched buildings. For this reason most urban building laws forbid thatch in towns. However, a number of simple fire-retardant techniques can be employed, so thatch is often the most economic roofing in rural areas.

Nonetheless, thatch is declining in popularity almost everywhere. This is because traditional styles of thatching, which were appropriate in self-contained rural economies cannot now compete with popular industrial products, particularly iron sheets.

Basic techniques for processing and use

The choice of material and therefore the thatching technique adopted primarily depends on which species are locally available in sufficient quantity. Exotic grasses are rarely economic as thatch is bulky and expensive to transport, although the increasing popularity of thatch in northern Europe has created a thriving international market for reed in recent decades.

For a roof of a medium sized house (approximately 150m2. floor area) the most durable type of thatch uses up to 3 tonnes of grass. This is the annual product of about 1.5 hectares of intensively managed marsh reed (a roof of which may last 60 years in a temperate climate), or 0.8 hectares of wheat. Thus it is apparent that a thriving thatching industry can offer a valuable market for local agricultural produce. 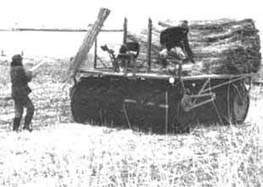 In many countries traditional thatching grasses are becoming more and more scarce, usually because land has greater value for other products. However, where thatch has been popularly accepted, indigenous species of grass can be managed profitably. Modern husbandry may include artificial control of water levels, in the case of marsh reeds, rigorous weeding, irrigation and selective application of fertiliser; although recent research in Europe shows that excessive use of nitrogenous fertiliser can produce higher yields at the expense of quality. Straw and reed grown under this regime appears to be prone to rapid decay caused by fungal growth.

Grows in both temperate and tropical climates. Harvested after seed has matured and when fine leaves have started to dry. Optimum size is 1.8m long, tapering stem and diameter 10mm. Should preferably grow in about 0.5m, depth of water which is drained just before harvesting. To take advantage of the most durable part of the reed stem - that which grows under water - it should be cut as close to the ground as possible.

The stems, with the cut ends aligned, are loosely tied in small bundles and combed to remove debris and fine leaves. The reed is then retied, with two bindings for each bundle so that the stems remain parallel to each other whilst the material is being handled between storage and the building site. Most thatchers prefer bundles of approximately 20cm diameter. Dry, well ventilated storage is essential.

Many species are used. The optimum characteristics are the same as for marsh reed, but cereal straw rarely grows much taller than one meter.

Wheat produces the most long lasting thatch, but the cultivation regime has to produce strong stems rather than high seed yield. The best straw comes from winter sown wheat. Timing the harvest is critical to ensure dry straw with minimal loss of saleable seed. Modern combine harvesters cannot be used as they break the straw, but special machinery has been developed to cut, bundle and comb the straw whilst separating and bagging the seed.

Labour intense harvesting of savannah grasses and straw may be feasible but the labour input can be significantly reduced by machinery. Reciprocating blade rice harvesters that are widely available in developing countries can easily be adapted for grass harvesting. As with reed, the grass must be cut when dry, bundled with the cut ends aligned and double tied after combing so that the stems stay parallel. Processing is dusty work so face masks should be worn to prevent lung complaints.

The same cultivation and harvest principles apply for grasses with flat-bladed flexible leaves rather than cylindrical stems. Particular care is needed when cleaning this type of grass; it often contains a high proportion of very short grass which will reduce the roof life unless it is removed.

Almost any shape of roof of suitable pitch (at least 45°) can be thatched. Simple structures without projecting chimneys or changes of pitch will last best.

The structure should be capable of supporting up to 40kg. per square meter, which is the weight of the heaviest material - marsh reed. Timbering, with sawn, split or round timber, is completed with horizontal battens secured to rafters at approximately 30cm centres. It is essential that a tilting board which is 35mm thicker than subsequent battens is fixed along the eaves and gables. This forces the first layer of thatch into tension and leads to the rest of the thatch being more tightly compacted than it would otherwise be. 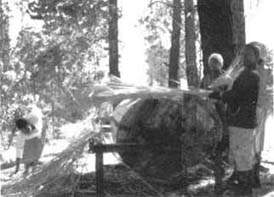 Thatch decays as the surface rots. The key indicator of stiff stem grass thatch is an evenly thick coat laid consistently compactly over the entire roof surface. The objective is to have the minimum length of each stem exposed on the surface with the horizontal fixing for each 20cm thick layer secured as deeply as possible within coat of thatch. If the fixing is too close to the surface the thatch will be so compact that it cannot dry out quickly, and it will become exposed on the surface within a few years. If it is too deep shorter stems may not be secured and excessive water penetration will lead to more rapid decay. On a 30cm thick coat of thatch laid at 50° each fixing should be 15cm deep, measured at right angles to the surface. A rule-of-thumb measure of compactness is the thatcher should be able to manually compress the new thatch to about 90% of its full thickness. 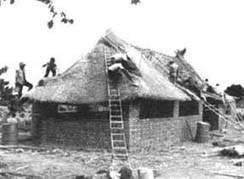 The ridge of both soft and stiff stem grass thatch is particularly vulnerable. If it is made of grass the fixings will have to be exposed on the surface; it will generally have to be replaced every 10 years. However, many other materials can be used for ridging, such as iron sheets, clay tiles or ferro-cement. The principle is to ensure that the fixings of the uppermost layer of thatch are covered and protected so that water cannot penetrate into the body of the thatch.

Economy is a trade-off between thickness of thatch, which affects durability, and the cost of thatching work which will hardly vary whatever the thickness. On average, optimum durability is achieved with a 30cm thick coat of thatch laid on a 50° slope.

A skilled thatcher, working with one assistant should be able to complete the roof of a medium sized house in 10 days. Using 3 tonnes of marsh reed and a ferro-cement ridge (which requires no maintenance) the roof should last 70 years in a temperate climate or 35 years in the tropics. By most people's definition, this is a permanent roof.

The opportunity cost of thatch depends on how long it lasts compared to a similarly priced roof of an alternative material. In northern Europe the price of reed thatch is comparable, over its life, to a roof of natural slate, and about 30% more expensive than a concrete tile roof. The time taken to thatch with straw is similar to working with reed, so the cost difference will depend on the relative material prices weighted by the lower durability of straw.

Thatch is combustible, particularly during dry weather. High quality thatching is the first line of defence as a compactly thatched roof is much less prone to catching fire than a loose and ragged coat of grass. Preventive measures should aim to reduce the risk from the most likely sources of fire. These are mainly dealt with in a later chapter; in addition several methods are particularly recommended with thatch.

If a fire does start it is wise to have facilities at hand to deal with it. A hosepipe connected to a tap with sufficient pressure to reach the roof is one method. In particularly dry climates it may be worth fitting a perforated metal pipe along the ridge; whenever there is a threat of fire the roof can be drenched. A simple precaution is to have a long handled rake stored near the house; if fire does start it may be possible to pull off some of the thatch to create a fire break.

Fires often start inside the house. The roof may be protected by having an incombustible ceiling fixed to the underside of the rafters.

Chemical fire retardants provide only temporary protection as they are water soluble. Treatment may be required for public buildings that are thatched, but it would add at least 30% to the thatching cost and would have to be redone every few years, so it is rarely economic for houses. Recent research suggests that some retardants may damage the roof by encouraging mould growth.

Groot C.; "The Progress of Decay and Weathering in Thatched Roofs" in Vegetable Plants and Their Fibres in Building; RILEM/CIB, Paris, 1986

Checklist of benefits and problems for grass thatch