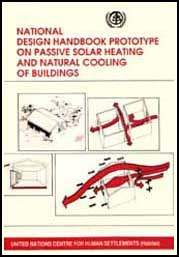 The ventilation of buildings is mainly influenced by the wind- generated pressure difference across the outside of the building. In the case of openings being at different relative heights it is also influenced by the temperature difference between inside and outside. This latter effect is usually minimal when there is adequate wind pressure for significant cross-ventilation. Design for good cross-ventilation is most important in the design of buildings in any of Australia's climates. It is especially important in the warm-humid climates as it is one of the key strategies for promoting comfort. Unfortunately, it tends to reduce privacy within a building and so a balance must be struck where this is important.

In light winds when air movement is so needed, cross-ventilation will only occur if not hampered by tortuous paths for air flow. Single-sided rooms, which result from restricted paths through a building, are difficult to ventilate unless wind speeds outside are high. Diagrams in figure 93 indicate the possible air flow paths for various enclosures.

External projections made from a variety of materials can be used to direct breezes into rooms as shown in figure 94. Such techniques may well be achieved in the design of appropriate shading devices for such openings.

Figure 94. Effects of external projections on the air flow patterns within a building.

It is important from the point of view of ventilation to consider the size of window openings on both the windward and the lee. ward sides. Figure 95 illustrates how the ratio of inlet to outlet will substantially Influence the wind velocity across such a room. It has been found, however, that the wind speed does not increase significantly as the area of the window exceeds 40 per cent of its associated wall area. The larger opening on the windward side causes relatively lower air velocities across the room when compared with a room with the smaller opening facing towards the wind. The volume of air moved in this case will be greater and so rooms with small openings on the windward side and larger openings on the leeward tend to have high velocity air patterns with a poor distribution throughout the room. Such conditions can be annoying as an air movement of 1.5 m/s or greater will cause papers to be blown about.

The air flow across a space with openings of equal area on two opposite sides is given as:

Where the areas of the inlet and outlet differ, the graph in figure 96 can be used to adjust the velocity. It can be seen that the volume of air flow diminishes rapidly as the inlet is made smaller in relation to the outlet. If the inlet is made larger compared with the

The wind pressure distribution pattern around a building will be influenced by both wind direction and building form. The diagrams in figure 97 indicate the general pattern for some simple forms; notice how extremes of pressure occur usually around square corners. This has implications for the through-ventilation of rooms which have ventilation openings on adjacent sides.

Studies undertaken by the BRE in the United Kingdom have found that roof shape also influences air movement patters. Flat-roofed buildings provide the greatest wind shadow on the leeward side and result in the greatest suction at roof level (this is why it is important to securely tie down flat roofs in high wind areas). An important point to note is that the smooth wind-shaped roof does not have a significant suction zone at or near the ridge and so ridge ventilators in such cases are not so effective. despite claims made by some designers.

In all buildings or enclosed spaces there is a tendency for warmer air to rise to the upper part of the space and the cooler, less dense air to settle to the bottom. This buoyancy effect will cause a flow of air proportional to the effective height of the stack. In the case of chimneys to unused fireplaces the warm air is lost to the outside to be replaced by cold air. which in winter is undesirable. In the case of buildings of more than one storey. the stairwell and other vertical spaces such as glazed sunspaces provide an opportunity for such air movement.

For a space with two openings separated vertically by a known height, the ventilation rate is given by the following formula:

A typical two-storey house has a high-level window in the stairwell at a height of 5 m above the ground-floor windows. On a still evening, after a hot day, the windows are fully open. The area of each is 1.2m and the temperature difference is say, 5°C. The air flow through that space will be approximately 3.6m³/see (a velocity of 3m/sec at the window). The structural cooling effect of this is discussed in the section on night ventilation and the cooling of heat sinks.