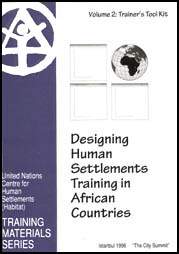 One picture is worth a thousand words.

Participants in training learn quickly and thoroughly when a lecturette is supported by visual aids. Studies at several universities have demonstrated that the time required to present an idea was reduced up to 40 per cent and the prospect of favourable results was enhanced when visual aids were used to augment a verbal presentation. The value of visual aids as a stimulant to learning is emphasised by leading authors on communications effectiveness. David Peoples points out, for example, that a picture is three times more effective than words alone, and words and pictures together are six times more effective than words alone. Individuals gain 75 per cent of what they know visually, 13 per cent through hearing and 12 per cent through a combination of touch, smell and taste.

There are many reasons why the trainer should make regular use of properly designed visual materials in lecturettes. According to Robert Pike, some of the most important are that they:

This is probably the most widely used technique in the projected visual-aid category. Overheads can augment and amplify information presented orally. How effective they are depends on whether or not the trainer:

In preparing transparencies for use in a training session, best results will be obtained if the trainer:

2. Presents only one idea on each transparency,

4. Uses cartoons, graphics and charts when possible instead of relying on words or numbers alone,

6. Makes use of “bullets” or numbers in series,

The words are clear in this illustration, but there is no visual impact.

The words are the same, but now steps provide visual reinforcement.

Locating the projector can have an influence on the use of visual aids. In setting up, be sure that:

1. Every person in the room can see the visuals comfortably while seated,

2. The screen is placed in a corner and angled toward the centre of the room,

3. The projector does not obstruct the participants’ view of the screen,

4. The projector beam meets the screen at a 90 degree angle to avoid image distortion or “keystoning,”

5. Spare bulbs, extension cords and other accessories are on hand, and

6. The projector lens and plate are clean and free of finger prints.

A few simple techniques practised by the trainer when using visuals can make a noticeable difference. For example, participants will be less distracted if the lamp is turned off when changing transparencies. Doing this will prevent exposure of participants to strong glare while there is no transparency on the plate. Overlooking details often can cause problems, for example, not having transparencies in the correct order. Choosing the wrong transparency or fumbling around for the right one is embarrassing and it can result in needless loss of credibility for the trainer.

Films have an advantage over transparencies or slides in that they portray events in motion. As such, they are a powerful medium for helping participants to identify with people in familiar situations and relationships - a manager counselling an employee or a clerk dealing with a customer’s complaint. Used properly, films can be a valuable learning tool; used improperly, they can be a colossal waste of time and money.

A mistake sometimes made by trainers is to use films for the wrong reason. In other words, films may be used to meet some need of the trainer and ignore the needs of participants. For example, a film may be used as a change of pace. There is nothing wrong with this practice, if the needs of participants are served better with a film than with some other technique, but there may be another reason for the substitution. The trainer might decide to use a film instead of a lecture merely to avoid the nuisance of preparing or delivering it. In addition, trainers with favourite films may be tempted to use them whenever they can find a good excuse. Participants may be told, “You’ve got to see this film!” despite the fact that it has little to do with the training content.

In addition to using films for the wrong reasons, trainers sometimes use them in the wrong way. Long films (over 30 minutes in length), presented without a break, can have the same effect on a group of participants as a long lecture that offers no opportunity for participant interaction. The probable result: boredom, distraction, tuning out. An otherwise good film, used in this manner, can have little or no learning benefit for a group of participants. Equally bad, using films in this way causes participants to conclude, rightly perhaps, that the trainer doesn’t know what he’s doing.

1. Does the film convey information needed by participants to understand the subject covered by the film?

2. Will the participants view the film’s subject matter as relevant to their needs?

3. Will the language of the film be familiar to the participants, or does it require them to learn new terminology?

4. Do the situations in the film have direct application to the experience of participants?

5. Does the film come with guides and application activities, or will these have to be developed?

Several simple techniques can improve the learning value of a film:

1. Introduce the film by explaining its purpose and what participants are to look for while the film is playing. Participants might be assigned to small groups and each small group asked to look for specific things in the film. After the showing, participants can take part in a discussion of the things each group was looking for.

2. Unless the film is short - 10 minutes or less - show it in segments that can be absorbed easily by participants. Involve participants in a discussion of each segment before going on to the rest of the film.

Some of the disadvantages of film are the high purchase price for good quality commercial training films and the difficulty of finding suitable films to buy or rent at any price. Moreover, training films quickly become obsolete. The buyer should be cautious, therefore, about making an investment in expensive training films that he has not previewed personally. Most commercial film suppliers will furnish low-cost, preview copies of their films on request. In most cases, the preview price will be applied to the rental or purchase price of the film.

The flip chart is one of the most widely used tools in the training business for conveying information and ideas visually. It can be used to create visuals as the lecturette takes place, or visuals can be developed in advance. Most material written on a flip chart cannot be seen at a distance. Hence, its usefulness to the trainer lessens as the size of the group increases. Its ideal use is for groups of 15 to 30 participants.

Several techniques can increase the effectiveness of a flip chart presentation:

1. Prepare some of the charts ahead of time and cover the key points with strips of paper that can be removed at the appropriate time in a lecturette.

2. Print key sentences on the chart ahead of time leaving blank spaces for use in entering words or phrases provided by participants.

3. Print key ideas on cards approximately 13 × 20 cm and post the cards on the chart pad as the points are made orally by the trainer.

4. Use a variety of colours beyond basic black, including bright colours participants may not be accustomed to seeing.

5. Leave the bottom third of flip chart sheets blank. This will help participants see the entire page and leave space for adding information after the sheet is posted on the wall.

7. Make use of flip-chart sheets to record information generated by participants. Use numbers to label each idea and enter a number at the start of each new idea to encourage the continued flow of ideas.

8. To remove a sheet cleanly, grasp the sheet near the bottom on both sides and pull it straight down and to one side in the direction the sheet is meant to tear. 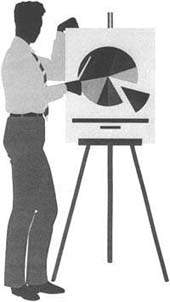 Visual aids enhance and accelerate learning. They can be used by a trainer with a lecturette or in conjunction with other training methods. The most frequently used visual aids are overhead projection, film (projected types) and flip charts (non-projected). Best results are obtained with visual aids when the material to be used is professional quality, the equipment is in good working order and the trainer knows how to use both to facilitate the learning process.