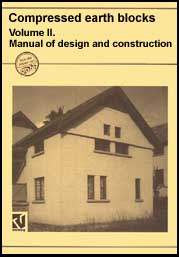 The second part of this book on building with compressed earth blocks seeks to show not only that the genuinely modern way in which this material is used and its diversity are self-evident, but also the quality of the architectural achievements realized during the 1980's.

The last ten years have been propitious for a significant development of building with earth in many countries. The compressed earth block is now recognized as a building material rich in technical, architectural and - not least - economic potential. Designers and builders place it high on their list of the range of materials available on the international building market and more and more compressed earth block building production and distribution industries are being set up.

Pilot and experimental projects linked to training have provided privileged situations in which exemplary progress in the use of this material has been made and enabled the genesis of a genuine architectural heritage founded on the blossoming of a body of knowledge to emerge. This progress has generated social and economic spin-offs through the many jobs which have been created in the production and construction industries set up.

The evidence of a new know-how

The compressed earth block, which can be used only through the setting up of a production industry, requires specific knowledge and skills at each stage of its production and use in building, from soil identification at the point of extraction to the completion of built structures. Along this production chain comes first the quarryman, followed by the brickmaker, the architect, the builder bricklayer, and the contractor, each of whom is aware of the potentials and limitations of the material and each of whom develops his own skills in order to fully exploit the former or to compensate for the latter. Building with earth blocks is in effect a real training ground closely linking the building logic of the material itself, with the architectural and the building culture of the architect and of the builder.

The selected project monographs which we present paint an overall picture of contemporary architectural achievements. They evoke both the diversity of the register of architectural applications in the field of housing and also the great richness of building solutions applied. May their role as examples boost the confidence of future builders and fuel their desire to use this material for the realization of housing, schools, colleges or health centres better suited to the needs and means of the societies they serve.