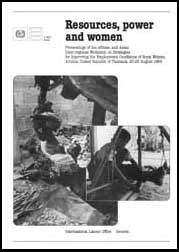 Jaya Arunachalam of the Working Women's Forum (WWF) in Madras, India, reported on the role of organising unorganised women workers (the majority of whom could be classified as heads of households) into unions for improving their access to credit, markets and alternative employment for better bargaining power. The women are victims of harsh working conditions, unemployment and lack of legal protection because of ineffective laws and male alcoholism leading to family neglect and oppression.

A "women intensive" strategy was evolved in which factors that came in the way of development, such as class, caste and gender were taken into consideration. The women were organised into unions to fight against discrimination and for better wages through better credit and marketing organisation.

The WWF is a people-based organisation and it has evolved a number of activities according to suggestions that have come from the participating women. The WWF has acted as a catalyst with its team of organisers who have been oriented to the requirements of these poor women and have formed the bridge between the women and other institutions. The Forum thus promotes the creation of self-managed, self-organised groups of women workers.

The WWF has adopted multiple strategies Co combat different situations. Where money lenders are the real exploiters, it has promoted credit as the strategy and has succeeded in de-linking the women from money lenders. When the enemy are the middlemen and contractors, who usurp a large part of women's earnings by cutting bigger profit margins for themselves, marketing is the strategy. When child labour exploitation is the problem, family planning is propagated as the strategy. In Dindigul, the problem was of unequal and low wages. A strategy of promoting alternative employment was adopted there to enforce equal and minimum wages for the women workers. At Narsapur, a study made by ILO revealed exploitation of women lacemakers by exporters who were making large profits for themselves. With the ILO's help, production centres were organised for the lacemakers, a marketing cooperative was established and the Ministry of Commerce was pressurised to help the Forum with export orders.

The WWF's experience indicates that women workers are disadvantaged both ways -some are over employed but for low returns, others are under-employed at discriminatory wages. A lack of mobility, imposed by caste taboos (as in the case of Narsapur lace workers) is another problem resulting in lack of options or bargaining power for the women. Diversification of product through simple technology was considered a better strategy for the less productive women.

The WWF believes in two principles:

- self management of workers - that for their economic struggle it is necessary for workers to have their own organisations;

- the need for separate women's organisations, particularly for the most disadvantaged group of women's workers, so long as the inequality between men and women remains.

Margo Russell presented the experience of women handicraft and petty commodity traders in Swaziland. Market women in Africa, as elsewhere, are subject to external pressures and fluctuations but their responses do not always display the strict economic rationale of market behaviour. In southern Sudan, when a settlement of expatriates was suddenly introduced, women from nearby villages started bringing food products to this new community of buyers but they maintained a preference for certain favoured customers instead of adopting the principle of maximisation of profits and minimisation of costs.

Since handicrafts often do not have a local demand, careful and innovative exploration of markets is a necessity. The case study of successful marketing that was presented was one of a group of Swazi women traders who took women's handicrafts from Swaziland to sell in South Africa, mainly to White buyers. The handicrafts were primarily made from materials that the women gathered free. The skills were traditional but the items were non-traditional, adapted to the requirements of the South African market. For Black buyers, on the other hand, the women procured products made from purchased materials, as they were in demand.

Successful women traders needed kin connections in South Africa to extend their trading operations. They also brought back second-hand goods, e.g. garments which they sometimes obtained as barter, in exchange for the Swazi products - to resell in Swaziland at a profit. Some of these women traders have been earning good money. The Swazi women producers do not perceive the women traders as exploiters or middlemen and appreciate their role - as it has expanded the market for their own products. (The women traders in the Manzini market, for example, have to compete with big capitalists.) It is an example of accomodation by a few entrepreneurs Co a segregated and restricted market.

Most women's projects neglect marketing and financial management. The harnessing of markets has to be done very carefully and intelligently; it is essential Co study:

- the nature of the product; whether it is a necessity or a luxury item will determine its turnover;

- whether it is an item in short supply as against demand and is based on the availability and continuous flow of raw materials;

- the marketing channels and accessibility to them;

- the capacity to hold on to production when markets are seasonal; and

- the flexibility in operations according to changing conditions.

The great risk that women's ventures run, however, when they are very successful, is that they attract big capitalists who may take over the business. There is often a dilemma between high-risk high project enterprise and low-risk low-wage jobs and there is a tendency for women's groups and economically weaker sections to opt for the latter. Some women choose risk and become enterpreneurs while others choose wages and become proletariat.

Hameeda Hossain (discussant) pointed out the practical problems that made credit and marketing a difficult world for rural women to enter. Firstly, they are ignorant of the characteristics of the market and of its competitiveness. Secondly, the physical and social distance between producers and buyers have made women easy victims of a plethora of middlemen.

The commercial system does not protect the producers. It is a great challenge for women to produce and enter into the handicrafts markets, yet they have to do this as a means of survival. It is, therefore, essential to help women survive in this competitive situation. The organision of producers is necessary to penetrate the market but supportive structures are equally essential for the organisations. Karika - a marketing federation of handicraft producers in Bangladesh - offers two types of services, viz:

Other important strategies that need to be adopted axe:

- organised pressure on the public sector and import policies to protect handicraft markets;

The efforts of the Grameen Bank in Bangladesh to provide group loans (60 per cent of these loans have gone to rural women) has made a distinct impact by making women conscious and confident of their economic roles and has raised their status in the eyes of the community. Since in most countries it is no longer possible for women to return to subsistence production, they must learn to deal with markets.

Patricia Bwerinofa (discussant) referred to the fact that the development process cannot take place without attention being paid to credit and marketing. Commercialisation and competition called for flexibility in approach and maximum use of existing structures. Access to credit is critical but it is a complex problem. There are different sources (institutional, informal) of credit and demand for credit is generally greater than its supply. Procedures for getting credit (i.e. filling complicated forms) are too complex for poor women and often the availability of credit is not timely.

Credit schemes for the poor are generally costly and have a bad reputation. Savings and credit are often not linked and this creates problems of sustainability for credit schemes. An emphasis on repayment of credit is critical for banks as failure to repay would discourage further lending. The issue of government subsidies to underwrite loans for small projects has to be carefully weighed.

Supportive structures for marketing, i.e. improved infrastructure, are absolutely essential but it is equally important to provide women's groups with training in costing, planning and managing their enterprises. Dependence on local raw materials should be a preferred strategy and market surveys and market research are necessary before women's projects are started.

The general discussion following the panel presentation was about the deliberate action programmes that would be required for improving the accessibility of women to credit, markets and better organisation. The importance of supportive systems and the building up of strong infrastructure for credit and marketing was emphasised.

It was pointed out that careful feasibility studies, carried out both formally and informally, should be made available to women and women's groups for strengthening their economic activities and reducing the rate of failure of women's economic ventures. Women often lack information about credit, input market and product market. They also have little knowledge about what is fair pricing. A strong delivery system for dissemination of information, particularly relevant and "timely" information is essential. Yet much can be learned from non-formal credit systems used by women and they may need institutional support.

The building up of effective catalytic agents, both organisations and persons, is necessary to establish different linkages for viable projects. It was argued that the ideology of marketing for poor women who are struggling for survival and subsistence is different from that for others who are marketing for accumulation. Poor women are the labour reserve and they often do not have no choice but to become proletariat.

It is therefore important to have buffer organisations to counter exploitation of the economically weaker sections by intervention in marketing, credit and raw material supply by the government and other agencies so as to give the primary producers a better deal. The structures that do exist, e.g. marketing boards, should function more efficiently so that the poor do not have to resort to middlemen.

Within the groups it is necessary to give training to leaders and build up a second and third line leadership to reduce dependency on single leaders. With greater participatory methods within the groups, it would be possible to establish a system and reduce dependency. The system should be self-reliant and self-generative with a minimum of subsidies from government which has a tendency to breed corruption and cause discrimination.

A strong network for savings and credit should be built up and the possibility of establishing national development banks for women could be considered. Some countries are already experimenting with innovative schemes of providing credit to the poor without collateral and of using mobile credit officers sensitive to women's needs. These have resulted in significant increases in women's access to credit. In a few other countries, poor women's groups have organised their own financing institutions. These initiatives need to be strengthened and expanded.