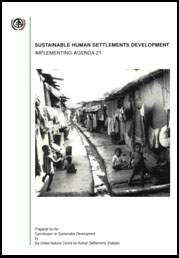 The poorer you are, the greater the threat. In human settlements, especially in large cities, the poor, without a doubt, are disproportionately threatened by environmental hazards and health risks posed by air and ground pollution, inadequate housing, poor sanitation, polluted water and lack of other basic services. Many of these already deprived people also live in the most ecologically vulnerable areas and on marginal lands characterized by high susceptibility to environmental degradation - in urban slums and squatter settlements, on steep slopes and in flood plains. One of the greatest threats to sustainable human and economic development comes from the downward, mutually reinforcing, spiral of poverty and environmental degradation which is endangering current and future generations in the developing countries.

From 1990 to 2030, global population will grow by 3.7 billion people. Ninety per cent of this increase will take place in the developing countries. Ninety per cent will be urban, virtually all of it will accrue to human settlements in the developing world. By 2030, urban populations there will be twice the size of rural populations. Primarily due to a decaying urban environment, at least 600 million people in human settlements already live in «health and life» threatening situations. Up to one-third or more of urban populations live in substandard housing. At least 250 million urban residents have no easy access to safe piped water; 400 million lack sanitation. Without a doubt, rapid urban population growth is exacerbating the often mutually reinforcing effects of poverty and environmental damage in human settlements.

Current trends in the liberalization of the global as well as national economies are accelerating urbanization and the economic importance of cities. Human settlements have much to gain from and contribute to ongoing processes of decentralization and democratization, but are also potential sources of upheaval if their resources are left to stagnate and decline.

Clearly the evidence is compelling. As population growth will be virtually synonymous with urban growth in the coming decades, the focus of efforts at sustainable human settlements development must be on urban areas as that is where most of the worlds population will live and work, where most economic activity will take place - and where most pollution will be generated and most natural resources consumed - with impacts, environmental and otherwise, which will be felt way beyond the city limits.

By implication, this also means that the focus of many, if not most, of the various sectoral programmes of Agenda 21 will be on human settlements, and especially on cities and towns. Here is where they have to be coordinated, managed and implemented. It is at this level where policy initiatives become an operational reality. It is also at this level where policies, as they directly affect people and interests, become an eminently political affair: conflicts have to be resolved and consensus found among competing interests and parties.

Breaking the cycle of poverty and environmental decline requires rapid economic growth, without which developing countries will not have the resources necessary to increase employment opportunities and to provide the basic services and environmental infrastructure needed to reduce levels of poverty. Economic growth depends, among other factors, on the closing of the ever-widening infrastructure gaps, especially in urban areas where already more than one-half, on average of GNP is generated and where in less than two generations the majority of the developing worlds population will live and be looking for work. Moreover, future economic growth will have to be generated in such a way so as to not result in further environmental decline and a rapid drawing-down of non-renewable resources.

The working paper illustrates throughout how human settlements policies and management are crucial for the achievement of Agenda 21 goals. Achieving the overall macro-economic, social and environmental goals of Agenda 21 requires development management at the local level which is not only efficient, transparent and accountable, but also inter-sectoral: capable of balancing and achieving the primary goals of increased productivity, poverty reduction and environmental protection. The paper outlines the basic elements required to help local authorities to become less controllers and more enablers and describes the type of multi-sector and multi-actor strategies which can mobilize and leverage local financial, economic and human resources.

In human settlements development, on average well over 95 per cent of investments come from the private sector and households, and from national and local governments. External support agencies can only be effective if they play a catalytic role by helping to improve policies and strengthen institutions. Influencing the actions of private economic forces so they are in step, broadly speaking, with the goals of Agenda 21, may be the single most significant challenge facing the United Nations and will take the organization and its agencies into waters which are still largely uncharted. However, such a role is absolutely necessary if sustainable development is to become the guiding principle of international development and if Agenda 21 is to meet its objectives. In light of this, an initial attempt to evaluate the contribution of the major groups has also been included in the working paper.

The assessment of progress achieved since UNCED in implementing Chapter 7 of Agenda 21 (Promoting Sustainable Human Settlements Development), reveals that most UN agency activities relevant to Chapter 7 are concentrated in three of its eight programme areas: human settlements management, environmental infrastructure, and capacity-building. Whereas agencies recognize the importance of the human settlements chapter, the consequences of urbanization on Agenda 21 implementation are still not fully appreciated. Moreover, there does not appear to be much new movement in two programme areas which are crucial for achieving Chapter 7 objectives: land resource management and urban transport. The majority of agencies appear to be continuing with their established work programme priorities. Some significant exceptions have been noted, but the most important ongoing multi-agency initiatives which are facilitating cross-sectoral approaches to settlements management have not attracted adequate additional resources. This is due to two principle factors: the proliferation of new agency programmes which are not designed from the outset as multi-agency initiatives; and the (not unrelated) recent severe cutbacks in multilateral aid flows.

It is clear that if the UN is to serve as a catalyst for action and for co-ordinating and monitoring Agenda 21 implementation (and given the need to most efficiently use shrinking resources) the UN must first learn to better cooperate and coordinate among itself. However, the downturn in resource flows to most UN system agencies may increase competition rather than cooperation. Given that likelihood, and its negative impact on a concerted system-wide implementation of Agenda 21, mechanisms should be established which provide incentives for multi-agency programmes and joint programming.

The assessment of progress so far achieved suggests a number of priority issues which must be addressed to facilitate the implementation of the human settlements chapter of Agenda 21. Several of the most significant of these are:

· Bridging the resource gaps and linking technical assistance with capital investment. Developing countries are facing a financial crunch when it comes to the enormous investments required for urban infrastructure and basic services. Greater emphasis must be placed on the development of financial mechanisms and on domestic resource mobilization. Many of the programme areas of Chapter 7 require large amounts of capital investment to reach their objectives. Technical assistance, the main activity of the UN, often prepares the ground for capital investment by banks and private firms. There is a need to broaden the range of actors for the implementation of Chapter 7, beginning with regional development banks. This process should also be extended to the private sector and modalities established for it.

· Emerging Intersectoral Priorities: Focus on the «brown agenda» and urban poverty. Among the most critical problems in human settlements are the health impacts of urban pollution. Collectively dubbed the «brown agenda», this set of issues is closely linked to the poverty-environment relationship. Similarly, many of the problems of access by low-income groups to basic services, land, housing and health care are grounded in their poverty. A focus on the «brown agenda» and urban poverty lends itself to a comprehensive and strategic multi-sector, and thus multi-actor, approach to sustainable development, through which many of the separate sectoral goals of Agenda 21 can be achieved in a more effective manner.

· Even and balanced approach to all programme areas of Chapter 7, with more emphasis on two key areas: land resource management and urban transport. Both have been relatively neglected and require urgent multi-agency responses, particularly given the rapidly escalating transport needs in the face of population growth and the related physical expansion of urban centres with their large «footprint» and symbiotic relationship with agricultural production. Failure to act in both programme areas will lead to serious negative consequences for the environment and sustainable urban development.

· Strengthening the economic, political and social institutions and organizations of civil society. In the area of human settlements, this means institution building, especially at the municipal level, and enhancing the capacity of community groups and NGOs as intermediaries and organizers, as well as assisting the private sector in developing countries to expand its contribution to settlements development and management.

· Special measures for the least developed countries. Given their limited resources and stage of development, and in light of their growing environmental problems, the least developed countries will require special funds similar to the GEF mechanism for Agenda 21 implementation. Such funds must be part of a wider assistance programme which can foster accelerated economic growth.

Given the importance of settlements management for the implementation of Chapter 7 and other parts of Agenda 21, special emphasis must be placed on management capacity building. Such improvement should focus on basic management and organizational skills first, later to be complemented by technical skills; a concentration on strategic interventions (such as land management); and a focus on good governance, broad-based participation, and curbing malfeasance and corruption in municipal institutions. The promotion of good management practice should be accompanied by measures to strengthen the powers and financial base of local authorities so they are free to pursue local development opportunities. Given the enormous and growing capacity building requirements at the municipal level, the best approach to training may be one which focuses on building «capacity for capacity», meaning strengthening the capacity of regional, national and local training institutions for capacity-building in all aspects of human settlements management and development. Such an approach is ultimately more sustainable than «one off» training courses.

Finally, the assessment of progress so far achieved in the human settlements chapter of Agenda 21 clearly indicates that innovative and efficient delivery mechanisms for external support are crucial if progress towards the goals of Agenda 21 is to be accelerated. To move coherently in this direction, a number of suggestions have been put forward in the Task Managers Working Paper. The most important of these are:

· Consortium Approach to Key Issues. One of the more efficient ways to implement the human settlements programmes of Agenda 21 may be through a focus on a limited number of strategic issues which can serve as an umbrella through which the objectives of programme areas of Chapter 7 (and related programmes in other Chapters) can be implemented in a cohesive and effective manner. Examples of such «umbrellas» would be the «brown agenda» and urban poverty. A consortium of all agencies which have a stake in the issue could then be formed for long-term support in implementation through joint programming and pooling of resources. Ideally, it should be possible to identify a relatively limited number of umbrella issues through which the vast majority of all Agenda 21 programmes could be linked and implemented. This would make operationalizing Agenda 21 easier and remove difficulties inherent in the sectoral structure of Agenda 21.

· Joint Programming and new Strategic Alliances. The range of collaborative approaches should also be widened beyond the traditional external agency/national government arrangements. As stressed throughout the working paper, emphasis should be on developing and expanding joint programmes and activities, based on new alliances (for example, with the private sector and business community and with local authorities and local communities), in order to mobilize and channel the enormous potential which lies outside traditional international assistance mechanisms.