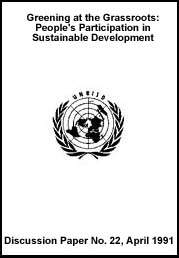 7. THE SIGNIFICANCE AND POTENTIAL OF LOCALLY BASED ENVIRONMENTAL INITIATIVES

There are several lessons to be learned from a study of environmental activism undertaken by traditional communities. It can be observed that collective action to resist the implementation of environmentally destructive development projects is rarely triggered primarily by an overriding concern to preserve the environment in its existing state, but rather hinges on the lack of sufficient benefits from such projects accruing to local communities. This fact does not imply that traditional communities are insensitive to the aesthetic niceties of their surroundings, but rather indicates that they have a desire to survive, and to improve their living levels and consumption levels if possible.

It has also become clear that, because of their extensive ecological knowledge, societies which are based on sustainable environmental management practices are much better able to accurately assess the true costs and benefits of ecosystem disturbance than any evaluator coming from outside the local area. Such societies are the first to realize that “development” which results in environmental degradation will rarely yield net benefits in the long run, and the emergence of popular opposition to a project can therefore be taken as a reasonably accurate indication that it will have negative environmental consequences.

A third indication of the investigation into the dynamics of environmental activism is that the success of such movements is often due to their ability to form a coalition with regional, national or international groups which have similar interests, and to publicize their grievances and their cause. Such support for local level activity can come from NGOs with development and equity concerns, from social movements focusing on human rights issues, or from international agencies directed toward environmental conservation. In addition, it appears that among the residual benefits of collective action of this sort is the ability of many of the movements to turn from negative to positive activity - they move, that is, from opposing to initiating activities in a process that Hirschman has dubbed “the conservation and mutation of social energy” (Hirschman, 1984). This transformation has taken many forms - from opposition to a large dam resulting in proposals and support for a series of smaller, more manageable dams (Bandyopadhyay, 1990), to the formulation of the entirely new concept of extractivist reserves (Schwartzman, 1989).

It is also clear, however, that environmental activism does not take place in a vacuum. The impact of such movements - and, indeed, the possibility of collective action being undertaken at all - depends to a large extent on the social, economic and political structures which influence community dynamics from the local, national and international levels. Thus the Kerala fishworkers’ movement owes a good part of its relative success to the fact that the fishworkers were working within a social and political system which enabled them to form a voting block large enough to make themselves felt at the state government level, in spite of the superior resources of the opposing fishing lobbies. The Penan, on the other hand, have had a substantially smaller real impact despite their more intensive and desperate struggle: the mechanisms by which the needs of these forest dwellers could come to outweigh the powerful logging interests are much weaker in this case, and in fact the progress which has been made is due in large part to international pressure, rather than to government responsiveness to its weaker constituents7. The importance of structural factors for the success, or even the existence, of collective action means that such action is not undertaken in all circumstances where there is a need and a will to do so. A repressive state can crush or atomize organizational efforts at an early stage, while the domination of the economy by outside interests can close off channels of activity on the local level. Similarly, the existence of intra-community repression can prevent class, race or gender-based alliances from forming, and from making their interests felt.

7 At least one Malaysian activist argues that the solution to this problem is not to change governments, but to break the power of multinational corporation to determine government policy on issues which affect them.

A fifth indication of this research is that the need for activism around local environmental issues has put sustainable resource management on the agenda of activist groups and NGOs with wider concerns. Thus the Organisation of Rural Associations for Progress (ORAP), a Zimbabwean development NGO, responded to the environmental degradation caused by inappropriate green revolution farming techniques by supporting a return to drought-resistant crops, organic farming methods, and afforestation programmes (Nyoni, 1990). A similar process has taken place within other popular organization (Blauert and Guidi, 1990). For example, the Popular Defense Committee of Durango, Mexico, which was originally organized to obtain housing rights and other basic needs, turned to environmental activism when industrial pollution threatened the water supply of the community. In time, this socially based ecological movement not only widened to include surrounding rural areas in its activities, but also expanded its activities to address problems of sewage disposal, drainage, and refuse management (Moguel and Veluez, 1991).