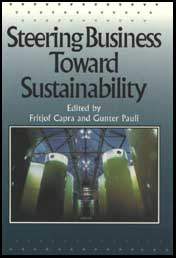 Over the past fifteen years, the concept of ecological sustainability has become one of the most important guiding principles for the global ecology movement. Introduced by Lester Brown in 1981 as the challenge to satisfy our needs without diminishing the chances of future generations, and promoted ever since in the Worldwatch Institute's annual reports, State of the World, the concept was coupled with that of development in 1987 in the UN report of the World Commission on Environment and Development (Brundtland Report). For some, the new term "sustainable development" was simply a strategy for sustaining previous patterns of development, but most people saw it as the first official attempt to integrate the desire for development with concern for the environment.

Over the following years, the idea of sustainability continued to gain wider and wider recognition, and in 1992 it was brought to the attention of millions around the world during the UN Conference on Environment and Development in Rio de Janeiro, popularly known as the "Earth Summit." The Earth Summit was a follow-up to the UN Conference on the Human Environment, held in Stockholm twenty years earlier, which had made "the environment" an issue on the international political agenda. The attendance of the Earth Summit and the parallel non-governmental events in Rio by 35,000 people, including over a hundred heads of state, was a powerful testimony to the dramatic increase of environmental awareness during the twenty years between those two UN conferences. The number of journalists in Rio alone exceeded the total number of participants in Stockholm.

The Earth Summit marked the beginning of a new era, dominated no longer by the East-West conflict but by concern for ecological sustainability, a concern that transcends all differences of race, culture, ideology, or class. As editors of this book, we come from very different fields - Fritjof from science and Gunter from business - but we share this deep concern about how to create a sustainable future for our children and all coming generations.

We have often imagined a new sustainable world, and at times we have encountered a strong resonance in the business community. But more often we seemed to speak a different language, sometimes even to live in a different world. How, then, we asked ourselves, can we help to steer business toward sustainability without being dictatorial, without trying to impose our logic? We feel very strongly that the time has come to take the initiative and present in a compact, readable book the key factors that can motivate executives to change course. This is why we have teamed up to edit the present book for the United Nations University.

This volume offers a rich dialogue of many voices, for which we have tried to provide some context in editorial comments at the beginning of each chapter (in italics). In addition, we have added our recommendations of essential readings for executives in the Appendix.

We are grateful to all the distinguished contributors to this volume. They are extremely busy people, but they found the time to write the informed and insightful chapters that follow.

We are also grateful to Ernest Callenbach who served as textual editor for the volume, skillfully helping our international band of contributors toward the standard of world English that is, increasingly, the lingua franca of business as well as science and other fields.

Our special thanks go to Trena Cleland who was essential in the complex task of processing manuscripts that came in electronically in many different forms, and also assisted in copy editing. Without her expertise and untiring help under great time pressure we could never have met our deadline.

We are also grateful to the Center for Ecoliteracy, formerly the Elmwood Institute, for hosting the editorial part of this project.

Last but not least, it is our pleasure to thank the United Nations University for sponsoring this venture. We feel that the UNU is an ideal forum for this dialogue. The UN has repeatedly taken the lead in bringing the need for ecological sustainability to the world's attention, and the UN University, according to its charter, serves as a center for ideas and a platform for creativity. In the framework of the UNU Agenda 21, several innovative programs have been launched, including a search for eco-restructuring, a new design for industry, and a zero-emissions research initiative, based on clustering industries, which is discussed below in Chapter 10. The UNU is also undertaking a book series in which this volume is the first publication, and there are plans to complement the book with a CD-ROM bringing new forms of education to our readers.

It is thus most fitting that this dialogue on how to steer business toward sustainability should be published under the auspices of the United Nations in the year of its fiftieth anniversary. The Earth is our common home and creating a sustainable world for our children and all future generations is our common task.