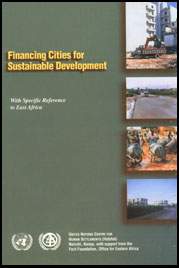 In Kenya's local government history since independence, the Central Government has allocated funds for various purposes, and in different forms. The purposes for which local authorities have benefited from central government allocations have included:

· Financing partly or wholly development of programmes of national significance, such as those identified in various development plans and included in the annual central government budget;

· Stimulating growth in local authorities, mainly to contribute to national growth and to reduce inter-regional disparities;

· Securing an equal or higher standard of services or development and to control other forms of growth, such as developing smaller growth centres to reduce population growth pressure on the bigger towns;

· Assisting cities and towns to cope with critical fiscal situations; and

· Assisting cities and towns with relatively inferior potential for raising own direct revenues.

· Allocations from the central government to the municipality through the Ministry of Local Government, and other sector ministries, whose activities also include development and provision of urban services and amenities;

· Allocations from the Central Government to the Local Government Loans Authority, which in the past has provided loans to local authorities for project development; and

· Allocations made in the form of grants mainly through the Ministry of Local Government.

Sharing of taxes and revenue

It has already been observed that local governments in Kenya are assigned several taxes from which they can derive their revenue. Assigning a share of central government taxes has been avoided until the current year (1997/98), when budgetary proposals have included tax sharing of income tax and road levy funds between the central government and local authorities from the beginning of the 1998/99 fiscal year. Local Authorities will get 20 per cent of the Road Maintenance Levy and a 5 per cent share of the Central Government's annual income tax collection. This will coincide with, and compensate for, funds lost through the scrapping of the local authority service charge. Although details have yet to be worked out, Nairobi City Council, as well as other local authorities in Kenya, are looking forward to the sharing of nationally collected taxes, as proposed in the 1997-98 budget, as a way of alleviating their current revenue resource problems.

There are several types of grants, from which local authorities have benefitted from. These include:

· Multipurpose contributions to balance local authority budgets, comprehensively reconciling local government revenue with expenditure. Such grants were given to local authorities, as a lump sum, to meet the gap between expenditure needs and potential revenue of the specific councils. The central government stopped giving these grants in 1982/83.

· Grants towards the cost of specific services or projects, mainly as a match contribution or to fill a revenue gap arising from other developments affecting a specific revenue source. From the late 1970s, local authorities benefitted from the Treasury Education Grants provided to meet the revenue gap arising from free education in primary schools, the free milk programme in schools and higher teachers' salaries following significant increases. These grants were stopped in 1985/6.

The total grants received by Nairobi City Council between 1980 and 1986, before the system of grants was scrapped, are shown in Table 24.

In the case of Mombasa, data also only reflects lump sum grants up to 1983/84, education grants up to 1984/85 and specific project grants that have been available throughout the period covered by the study, but on an ad-hoc basis. Multipurpose development grants, given under the DDCs, are also not included in the accounts of the council.

Mombasa received Kshs. 21 million in 1981/82 as government grant provided by the treasury to compensate for losses of revenue amid escalating costs due to developments in the education sector. In 1984/85, the Municipality received a further Kshs. 3 million, as part of these grants. When the government stopped the awarding of grants, it took over the paying of all municipal teacher's salaries.

The municipality also received other government grants totalling Kshs. 1.9 million and Kshs. 3.0 million in the years 1981/82 and 1988/9, respectively. These grants were given on an ad hoc basis.

In general, without the sharing of taxes and revenue, central government allocations are of little consequence to the running of large municipalities which have big budgets. They are, however, useful as stop-gap sources before other buoyant revenue sources can be put into place, and this is exactly the role they have played in the 1980s and 1990s.

The most important criteria that has been used for allocation of grants by central government has been the amount available for distribution, which has rendered them both ad-hoc and inelastic.

Timing of allocations is important in that the grants become part of the budgeted revenue for the in-coming year. In Kenya, the Central Government and Local Government financial years are similar.

When urban authorities were reestablished in 1978 they were not vested with powers to raise revenue except user charges, market stall fees and so on. The rest of the revenue was allocated by Parliament or was apportioned between them and the central government.

In 1980, the new Urban Development Policy was tabled before Parliament. This made provisions for the government to transfer to the councils some limited sources of revenue to meet part of their recurrent expenditure. They were also required to explore other ways of raising revenue other than the traditional ones. The government offered to make grants available to the councils relating to the development or maintenance of some services within their areas as shown in Table 25.

Business licensing creates an arena where the powers of the urban authorities and those of the central government are not clearly defined. This leads to overlaps, confusion on the part of tax payers, and possibly non enforcement and non-compliance.

By an Act of Parliament, Road Toll became collectible effective from 14th June 1985. Since then, collections have remained pegged to a litre. As stated earlier, the current rate is Tshs. 60.00 per litre. Collection is made by the central government and Tshs. 5.00 of this is supposed to go to the local governments' Road Rehabilitation Fund. As indicated earlier, the central government, which collects the revenue, often does not transfer the share due to local authorities to them.

Hotel Levy is administered under the Hotel Levy Act of 1972 and is paid by hotel owners to the Tanzania Revenue Authority in respect of accommodation. If the hotel in question has less than ten rooms and does not provide or serve regular meals, the levy is payable to the respective local authority.

* Identical charges levied by both the central government and urban authorities.

These are grants aimed at enabling the local governments to discharge their obligatory functions, taking into account their tax potential and other resources. The usual criteria for determining the amount of grants are: (a) the cost of the service, such as the maintenance of roads, primary education, rural and urban health and water; (b) the revenue to be raised locally; and, (c) factors of growth of the services.

These are given by the government as an inducement to local action and/or when a demand is made upon the authorities to develop services or functions necessary from the view point of national policy.

Government contributions in lieu of rates on property

The government owns a lot of property within the jurisdictions of local governments which benefit from the services of local authorities. The government however is not obliged to pay property tax to local governments, although the Urban Authorities (Rating) Act of 1983 empowers the Minister to change the status of any government building to being a rateable property. The Minister is also empowered to make payment to local authorities (grants) in lieu of the rates which would be payable as property taxes. This arrangement however has not been operationalized in the United Republic of Tanzania.

As pointed out above, there is no definite allocation formula for giving grants to the local authorities, except in the case of the road toll. There are general principles of this allocation, but what is actually allocated would appear to depend on precedent and the negotiating ability of the local authorities. Historically, urban areas have been favoured over rural authorities in terms of grants from the central government. Within the urban areas, Dar es Salaam, which is by far the most endowed of the urban authorities in the country, has been receiving a disproportionately high share of the grants given to urban authorises. In 1990/91 Dar es Salaam received 64 per cent of the development subsidy earmarked for the 19 urban councils in the country, and received the highest per capita expenditure on social services. Thus, it can be said that the allocation of grants appears to be, to an extent, ad-hoc and inequitable. It is also clear from the figures for Mwanza and Dar es Salaam (Table 27) that the richer Dar es Salaam gets a higher proportion of the subsidies compared to the poorer Mwanza. In addition, the timing of the local and central government budgets differ, hence the grants are usually untimely.

These are grants given to local governments without any condition. The grants are intended to meet the cost of decentralised services as provided for in the Second Schedule of the Local Government Act, 1997. The allocation formula is quite clear:

The third category of grant under me national constitution are equalisation grants. These are supposed to be given to local governments lagging behind others in national average standards in specific services. This type of grant has not been given to any local government due to lack of funds.

The amounts transferred are far from being adequate. The formula used to transfer grants seems to favour the densely populated areas.

These grants are guaranteed by the new constitution of 1995. The law allows inflation of the previous financial year to be taken into consideration, so that the grants may be considered to be buoyant and, therefore, sustainable.

Central government is still reluctant to pass on large amounts of funds to local governments, which they believe are not able to use such funds effectively. Such views have recently been expressed by high ranking officials in newspapers and other official documents.

Starting with 1997/98, the financial years of both Central Government and local governments were harmonised to 1st July to 30th June and this has improved the budgeting process at the local level.