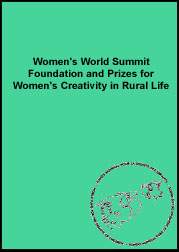 World Fund for the Dignity of Children: to help end their sexual exploitation and educate to prevent such practices*

World Fund for the Dignity of Children: to help
end their sexual exploitation and educate to prevent such practices*

The right to dignity: if not now, when?

The Women's World Summit Foundation (WWSF), a Geneva-based international coalition for the future of women and children, working for a new development paradigm for and with women and children, initiated on 27 August 1996, the World Fund for the Dignity of Children, in response to the urgent call for action launched at the 'First World Congress against Commercial Sexual Exploitation of Children' held in Stockholm (27-31 August 1996).

to help end their sexual exploitation and educate to prevent such practices;

support implementation of the Convention on the Rights of the Child (one of WWSF objectives);

empower women and children to claim their right to dignity.

What is sexual exploitation of children

The Convention on the Rights of the Child defines a "child" as anyone below the age of 18 years unless, under the law applicable to the child, majority is attained earlier. Commercial sexual exploitation of children is the use of a child for sexual purposes in exchange for cash or in-kind favors between the child, the customer, intermediary or agent and others who profit from the trade in children for these purposes. The three forms of sexual exploitation are child prostitution, trafficking and sale of children across borders and within countries for sexual purposes, and child pornography. Each year, more than 1 million children worldwide are reportedly forced into child prostitution, trafficked and sold for sexual purposes or used in child pornography. The sexual exploitation of children is a totally unacceptable violation of their rights, a destroyer of childhood, dignity and health.

Aim of the Fund

help fund implementation of comprehensive plans and programs to prevent sexual exploitation of children, and facilitate their rehabilitation and reintegration.

promote preventative measures which will end the vicious circle and stop proliferation of these practices, such as educational models, public community briefings focusing on living values - guaranteeing dignity and a childhood for every child.

generate increased public awareness of and support for effective programs.

Because the end of sexual exploitation will be the result of combined efforts by governments, NGOs and civil society, we encourage everyone to take a strong stand for the total eradication of this unacceptable social plague of our times. WWSF thanks all donors for their contributions towards the Fund.

All donations are welcome and are used exclusively for the aims of the Fund . You may send your contributions to WWSF, or directly to: Union Bank of Switzerland (UBS) POB 2275, 1211 GENEVA 1, in favor of Children's Dignity Fund, Swiss Franc Account No: 395.307.M1C.

Coordinating Committee members carry out research and submit proposals for funding. After common
evaluation, final project selection is undertaken in June of each year. A Report of supported projects is
disseminated via press releases and WWSF Global Newsletters. For information about projects already
supported by the Fund, please click here.