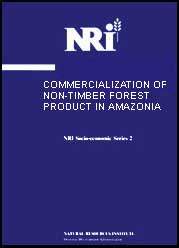 Following the discovery of vulcanization in 1839, rubber became an important commodity and its extraction and export from Amazonia expanded rapidly, especially after 1870. This caused a high demand for labour and so poor labourers from the drought-prone northeast of Brazil were recruited to fill the gap. Most of these settled along the tributaries of the Amazon and collected latex in the adjacent varzea forests (although Hevea brasilierisis also grows in terra firme forest), causing the displacement of Amerindian groups to the terra firme (Schmink and Wood, 1986).

The impact of the rubber boom on indigenous societies has already been mentioned. Murphy and Steward (1956) documented the effect of the rubber trade on the Mundurucu Indians of the Brazilian Upper Amazon. One of the main factors which weakened their society was that tapping was best done individually, and not collectively as had been the case with the cultivation and processing of cassava, which previously formed the basis of their economy. Colchester (1989) refers to this as the 'atomizing effects of individualist training'.

The rubber boom was broken by the establishment of Hevea plantations in South East Asia by the British, where domestication was not hampered, as it was in Brazil, by leaf rust fungus (Microcyclus ulei). The development of synthetic substitutes further hastened this decline. Extraction in Brazil has only continued as a result of the Government policy of subsidizing national production to the extent that rubber prices in Brazil have been up to three times the international price (Fearnside, 1989). Allegretti (1990) attributes this to the lobbying power of vested interests in the marketing and industrialization of rubber, as well as to the acute shortage of foreign exchange.

From the beginning these migrants were inserted into a highly regressive credit and marketing system called aviamento in which market goods were supplied on credit at inflated prices, to be paid for in extractive products, mainly rubber and Brazil nuts. As a result of the low extractive product prices offered by the petty rubber merchants or patraos (owners of the rubber trails), and the inflated food, clothing and medicine prices, rubber tappers were always in debt.

The system was thus one of debt bondage in which rubber tappers were obliged to sell all their produce through the patrao, as well as often paying rent to him in exchange for rights to use his land (usufruct rights). The presence of independent small-scale merchants who offer an alternative when prices become too extreme, provided some limit to the system's inequity.

Several studies document the inequity and welfare impacts of aviamento on rubber tappers. For example a survey of 170 rubber-tapper households in Caruari, Amazonas State, by Whitesell (reported in Browder, 1992) between 1986 and 1991 revealed that 76% had a patrao to whom they felt obliged to sell all they produced, 28% also paid rent to him and 79% were in debt.

Sizer (1991) presents data from 51 families in the Jau National Park, Amazonas State, that show that patraos were supplying basic foodstuffs at over twice their market value in Manaus (the nearest urban centre), paying 30% below Manaus prices for extracted products, and charging real monthly interest rates of 40% on parts of the outstanding debts. According to Sizer's data, average monthly expenditure was greater than mean income recorded from extraction.

A survey of 24 households by Romanoff (in press) in Riberalta, Bolivia, in 1981 found that all but one were in debt to patrones (merchants) to an average equivalent of a quarter of their annual household income. Food staple prices were 50% above those paid by urban residents. Periodic food shortages were reported by 71% of the households, 22% of the children were malnourished, and a further 32% were in danger of becoming so. As with the data of Oliveira and Whitesell (both in Browder, 1992) this survey reports high residential instability amongst extractors.

The low return to producers is partly explained by the high cost and risk of transport, often in treacherous weather conditions, and the high risks of marketing extractive products in a hyper-inflationary economy (Padoch, 1989). The merchants and patraos themselves are usually also in debt to downstream merchants, as this indebtedness is transferred back up the marketing chain to the wholesalers and exporters who provide the seed money for aviamento.

The aviamento system is still widespread and exists in many forms throughout the Amazon Basin. Although it maintains extractors in conditions of severe deprivation, there are two factors which may make it difficult to replace. Its primary function is its capacity to call forth supply from remote areas - a means of bridging the gap between the non-market subsistence economy and the market economy (Torres and Martine, 1991). For this reason aviamento tends to decline in importance as the road network expands, as happened in Acre from the 1960s.

Secondly, the system is designed so that rubber tappers maximize time devoted to extractive activities: by manipulating the terms of trade, the merchants or patraos oblige the tappers to engage in extractivism (in order to pay off their debts) and provide the products which form the basis of the merchant's trading business. This leaves little time for subsistence agriculture. Thus aviamento may be environmentally more benign than the alternative autonomous system.

Aviamento helps to explain Government policy towards rubber extraction, as it forms part of a commercial system in which many powerful interests are involved. Post-war policy has therefore always sought to protect the regional commercial system and avoid putting Amazonian rubber in a competitive position with Asian plantation rubber (Schwartzmann and Allegreti, 1987).

There has been a shift from aviamento to an autonomous system in more accessible areas. It is termed autonomous because it does not involve dependence on a trader or resource owner. In the autonomous areas there is a greater diversification of activities and products, and a more reasonable quality of life is achieved, according to Schwartzmann (1989) who undertook a survey in one such area in Acre where the National Institute of Colonization and Agrarian Reform (INCRA) had granted land rights to rubber-tapper families.

The survey found that the average holding was 372 ha and an average family exploited 1100 rubber trees. From an annual family production of 750 kg of rubber and 4500 kg of Brazil nuts, annual incomes of almost $1000 were earned, with some earning over $1500 plus subsistence benefits. This gave them an income that put them above half the EAP of the region (Schwartzmann, 1989). However, there was a big variation in the economic condition of the households: even without aviamento 55% of the households were in debt to middlemen, while the remainder had an average cash surplus of $680.

Schwartzmann (1989) reported that rubber tappers were keen to remain in the seringal (rubber estate), valued the forest, and had a more balanced diet than urban dwellers. However more recent evidence from Oliveira (in Browder, 1992), also in Acre, reports a 'progressive deterioration' in their diets.

Changes in tenure and resource use in acre

Between 1960 and 1980, major changes in land use and distribution occurred in western Brazil, especially in Acre where extraction declined both in area (by 65%) and number of holdings, and ranching and agriculture increased enormously. This was a result of the Government policy of frontier development through expansion of the road network, resource privatization, and subsidies.

In the first half of the 1970s, up to 80% of State lands were sold and land prices rose by 1000-2000%, depending on access to roads (Schwartzmann, 1991). This was encouraged by subsidized credit available at negative real interest rates throughout the 1970s. This together with very low prices made land an extremely attractive investment for businessmen from southern Brazil. Operations of 'cleaning the land' or removing the rubber tappers and small farmers became common from 1973 as ranchers intimidated and bought out rubber tappers for low prices. The consequent outmigration more than doubled the urban population of Acre from 21% in 1960 to 44% in 1980 (Schwartzmann, in press). There are reports of whole towns of ex-rubber tappers, like Eirunepe in Amazonas, which grew from 8 000 to 30 000 in five years (Parfit, 1989). In addition between 10 000 and 50 000 moved over the border to Bolivia.

Rapid deforestation soon followed these changes. By 1987 the area deforested in Acre had increased to 633 000 ha from 77 000 ha in 1975, according to official statistics. It is not coincidental that the level of assassinations also reached a peak of almost 200 a year in Brazilian Amazonia in the mid-1980s (Schwartzmann, in press). Fearnside (1989) comments that rubber-tapper leaders were continually threatened by gunslingers hired by ranchers. The assassination of Chico Mendes in 1988 brought this situation to world attention.

Its adherents claim that it represents a genuinely bottom-up approach in which grassroots organizations have developed with little or no Government support (Allegretti, 1990). The legal recognition of property rights proposed for extractive reserves follows traditional patterns of land use. Each landholding allows for a mix of activities, as in the autonomous rubber tapper system, with generally three rubber trails of 120 trees per trail in some 100-150 ha. Some of these trails may lie within another holding, but the rights to the rubber trees are recognized.

The land is retained by the State and is leased to the rubber tappers for an initial minimum period of 30 years: this avoids the normal process of land concentration and deforestation which has followed privatization in the Amazon region. The extractive reserves are under the joint control of CNS and the Brazilian Environmental Institute (IBAMA), but at the local level are administered by locally elected groups.

Due to continued conflicts over land rights progress has been slow. Schwartzmann (in press) reports that at the time of writing 14 reserves have been decreed and four are operational.

The Government has showed support for the extractive reserves concept through increased social infrastructure, and support to co-operative processing initiatives (Sizer, 1991). Several important processing and marketing co-operatives have been started, most notably the Brazil nut plant at Xapuri in Acre State.

The future of natural rubber extraction

Natural rubber extraction faces a bleak future as a result of successful domestication in non-Amazonian Brazil. Large areas have been planted in Sao Paulo and Matto Grosso States, and Browder (1992) estimates that cultivated rubber now supplies 60% of Brazil's market. These plantations, which have the major economic advantage of being nearer the centres of demand, will soon be able to supply all Brazil's domestic rubber needs at a reduced cost, thereby removing the rationale for subsidizing wild rubber extraction. Liberalization policies in the Brazilian economy are also likely to increase pressures for reduction or removal of this subsidy.