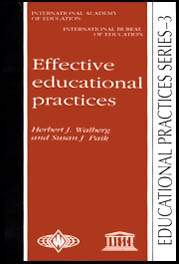 Dozens of studies have shown that the home environment has a powerful effect on what children and youth learn within and outside school. This environment is considerably more powerful than the parents' income and education in influencing what children learn in the first six years of life and during the twelve years of primary and secondary education. One major reason that parental influence is so strong is that, from infancy until the age of 18, children spend approximately 92% of their time outside school under the influence of their parents.

Co-operative efforts by parents and educators to modify these alterable academic conditions in the home have strong, beneficial effects on learning. In twenty-nine controlled studies, 91% of the comparisons favoured children in such programmes over non-participant control groups.

Sometimes called 'the curriculum of the home', the home environment refers to informed parent/child conversations about school and everyday events; encouragement and discussion of leisure reading; monitoring and critical review of television viewing and peer activities; deferral of immediate gratification to accomplish long-term goals; expressions of affection and interest in the child's academic and other progress as a person; and perhaps, among such unremitting efforts, laughter and caprice. Reading to children and discussing everyday events prepare them for academic activities before attending school.

Co-operation between educators and parents can support these approaches. Educators can suggest specific activities likely to promote children's learning at home and in school. They can also develop and organize large-scale teacher/parent programmes to promote academically stimulating conditions and activities outside the school in a systematic manner.