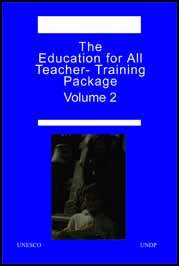 The Role of Non-governmental and Community Organizations in Promoting Environmental Education: Magic Eyes in Thailand

There is mounting concern that environmental destruction is advancing at so swift a pace that there is no time left to wait for the next generation to be environmentally educated. Fortunately, reaching children and youth effectively can also be a means of reaching adults, thereby helping to change the behaviour of two generations at the same time. This is illustrated in the following case-study.

The Thai Environmental and Community Development Association (TECDA) began work in the early 1980s with the aim of educating all the people to be environmentally aware. At the time the Programme was launched environmental education was a relatively new concept in Thailand. It was hoped that awareness would lead to action (initially in people’s own domains - in the house, outside the front gate) and then to participation in developing the community and the country as a whole. Thus, the idea of issue ownership was being put into practice to develop responsible citizenship. The ultimate aim of the project was to develop a love for, and attachment to, one’s environment, so much so that one would no longer allow others to pollute, but rather encourage them to conserve the environment. The important point was to present complex environmental problems simply and to show how they affect individuals.

TECDA’s basic mass education began with the ‘MAGIC EYES’ HELP KEEP THAILAND CLEAN CAMPAIGN. The Thai population is young, 60 per cent are under 25 years old and 40 per cent are under 14. Young people have a major influence on society today and they will be the future economic leaders, industrialists and policy-makers. The campaign was, therefore, developed with children and youth as the main targets, and adults as secondary targets. A series of cartoon advertisements on television were directed at children - persuading them to put rubbish in its proper place and encouraging them to ‘police’ adults and shame them into doing the same thing, with the words ‘Ah-Ah! DON’T LITTER! MAGIC EYES SEE YOU’.

The campaign started in 1984 with advertising and promotion to get people involved. Life-size puppets, television advertisements, badges, stickers, T-shirts, posters and handbooks were used to promote the MAGIC EYES. The logo is shown on the following page.

From the anti-litter campaign, the Programme expanded to address problems of water pollution and forest destruction. The slogan was changed to HELP KEEP THAILAND GREEN AND CLEAN. Kindergartens are now teaching MAGIC EYES jingles the way nursery rhymes are taught as a means of instructing children not to litter

In developing this Programme, partnerships have been built up with various sectors of the community. In particular, they involve community leaders of various kinds, government officials, the private sector in the community, and schools. Contributions have been received from supporting companies, followed by actual participation and involvement whenever possible.

Activities and campaigns have also been launched to encourage involvement and participation by the general public so as to increase understanding of environmental problems and to raise the consciousness of different communities (for example, factories, businesses and open-air markets) to their responsibilities for maintaining a good environment. They include tree-planting and anti-litter campaigns, contests among different groups such as clean factory, clean market, street sweepers contests, and riverbank and floating restaurant contests. There are also painting competitions, slogan contests, cartoon drawing and essay contests.

In January 1990, the Chao Phya River Programme was launched to draw attention to the rapid deterioration of this river which runs through eleven provinces and has always been considered Thailand’s lifeline. The MAGIC EYES logo is used, but in a blue colour scheme. Since the start of the Programme, interest in the Chao Phya River has increased markedly in all sectors: individuals, communities, schools, university groups, mass media and the government. Examples include a trial Programme to collect garbage along the riverside by boat, and the introduction of both short- and long-term measures to solve the problem of water pollution at the Bangkok Fish Market.

The Programme has been tremendously successful in getting Thai people educated and involved in improving local environmental conditions. The number of people actively participating in the Programme grew from 15,000 in 1984 to over 100,000 in 1986 and 500,000 in 1989.

An interesting example of a population education Programme which attempts, on the one hand, to ‘start where the learners are’, and, on the other, to place its activities in the context of the cultural and religious values of the country, is furnished by Benin. The idea of a Programme concerned with sex education was a sensitive issue and, from the beginning, it was difficult to launch it properly. Therefore it was decided to change the tactics and redefine the content and context. An attempt was made to distinguish between population education as such, and the requirements of family planning, and to address relevant messages to appropriate age-groups. Educators and teachers were trained on the basis of a Programme covering more than one discipline, for example, issues relating to biology, health education, environmental education, etc.

The Programme now in operation starts gradually with an emphasis on health and hygiene in pre-school education. It then develops at primary school on an interdisciplinary basis in relation to geography, preservation and safeguarding of the environment and health - with relevance to diseases prevalent in the country. At more advanced levels links between the quality of life and population trends are established and appropriate attitudes and behaviour are cultivated. For those in higher education, there are seminars and conferences on specific topics. This Programme is now operating successfully and the initial resistance has been overcome.

In its simplest sense the ‘health-promoting school’ is a force for the dynamic interaction of three strands - the classroom, the school community and the local environment. Its main characteristics are described below:

What children learn in the classroom through the health-education curriculum depends for its effectiveness on the nature of the curriculum itself and the skills of the teachers.

What children learn incidentally from being in a school community through its ethics, its policies and physical structures, and its regard for human relationships and dignity, should support and provide further development of what is taught in the classroom.

What children learn from their environment through living in families and their contacts with other influential groups, through the media and through the activities of the school health service and other health-related services, such as hospitals and public health campaigns, complements the other two strands.

The concept of the ‘health-promoting school’ is still in its infancy. The successful health-promoting school is one which is able to co-ordinate all these opportunities to learn to the best possible advantage and to focus all relevant influences on promoting the health of pupils and teachers. All too often, where there is excellent learning and teaching in the classroom related, perhaps, to tobacco or nutrition, the messages and influences are undone by bad experiences in school canteens or by the lack of coherent public policies with regard to smoking. Children learn more from example and from good role models than from rhetoric.

According to UNESCO estimates, even if enrolment trends are maintained, there are likely to be 200 million out-of-school children by the year 2000.

Out-of-school children include orphans and children from underprivileged families. Some may have dropped out of school, but most of them never attended school. For all of them the essential problem is survival. Self-preservation and the demands of the family, if there is one, thrust adult responsibilities on them prematurely. Nevertheless, they have the right to health education.

Among the out-of-school children are the street children. It is estimated that there are 30 million street children in the world, victims of poverty, war, civil strife, and loss of parents. Half of the 30 million live in Latin America: 7 million children alone live on the streets of Brazil’s cities and towns. Community-based organizations have devised ways of reaching out to these children.

Underprivileged children in urban areas who, with their families, struggle for survival, often do not value schooling, nor can they afford it. There has been an alarming increase in the number of poor urban families due in part to the growing migration from the rural to the urban areas. Far too many children either become street children, driven to engage in illicit activities, or are exploited as cheap unskilled labour, condemned to live in slums with no social identity or hope of escape. In a number of countries efforts are now being made to reach these children.

Another group of children who do not go to school are those from poor families in rural areas where child labour is still regarded as an essential part of the way of life. Children, especially girls, are needed to carry out many daily activities such as collecting firewood and fodder, grazing animals, carrying out household chores and minding younger children. Being poor and female are two major reasons why many of these children do not go to school (see also Topic 2, Module 3).

Adult literacy programmes focused on health promotion are being carried out in many countries around the world. Sometimes the initiative and support come from specific concerns such as nutrition, family life or AIDS. In other cases they may integrate activities to meet more than one need: for example, a self-reliance and literacy Programme in Bangladesh seeks to help the landless, the young and women. Education, health, family planning and income-generating activities are all incorporated in it.

Other programmes have been aimed specially at mothers and pre-school children. In India, for example, as part of the country’s integrated child-development services, mothers can come to health centres where they can learn about such topics as immunization, nutrition and a clean environment. The services are designed to help mothers develop good hygiene and health habits in children before they enter school.

Adapted from: EfAMonographs I and 11.

The ‘Child-to-Child’ Programme, pioneered in the United Kingdom and adopted in many developing countries, is based on the fact that many children spend much of their time caring for their younger siblings. In developing countries it is the youngest children who pay the highest price in terms of illness. The main causes of infant mortality include malaria, diarrhoea, respiratory infections and infectious diseases, most of which are due to unhygienic conditions and malnutrition. All are, to a greater or lesser extent, open to remedy or alleviation by public health education. Children are receptive to new ideas and have abundant energy to pass them on and apply them. If they are taught sound health principles, they are better able to look after the younger children in the family, carry new ideas into the home and help to reach out-of-school children.

The ‘Child-to-Child’ approach is based on four principles: (i) the importance of primary health care, that is, to develop within the community and in each of its members the ability to take responsibility for improvement of their own health; (ii) confidence in the ability of children, as members of their community, to spread the messages of primary health care among their parents, their families and their communities; (iii) the importance of action - in health education every lesson should be accompanied by practical work related to health care; and (iv) the need for co-operation, that is, mutually agreed action taken by educators and health workers.

Activity sheets and other learning resources have been developed, relevant to the country in which the Programme is operating. Since it was launched in 1979, the International Year of the Child, Child-to-Child has become operative in over sixty countries.