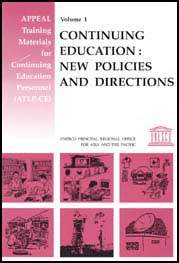 Under APPEAL UNESCO PROAP has developed a set of materials and a system of training for literacy personnel in Asia and the Pacific - ATLP. The training programme provides guidelines for developing a literacy training curriculum, for designing and producing training materials and for establishing a training infrastructure. A systems approach has been adopted for all aspects from macro to micro levels. By macro level is meant the development of a national literacy training policy and system and by microlevel is meant the design, production and use of training materials and of specific training activities using a systematic INPUT-PROCESS-OUTPUT model1.

1 Meyer G. Rex «The development of minicourses (with basis in educational technology) for the In service Education of Teachers and Trainers» PLETVOL. 6 No. I February 1979, pp. 23-37.

During 1988 and 1989 twelve volumes for ATLP were produced by UNESCO PROAP, Bangkok and Regional, Sub-Regional and National Workshops have been held to familiarize literacy workers with these materials and to train them in their application. The titles of the volumes are shown below (Figure 4.1). The materials were produced with three levels of personnel in mind as shown in the triangular diagram (Figure 4.2). 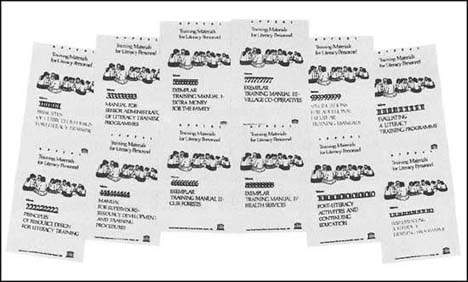 ATLP, however, is designed to help Member States achieve universal literacy by the year 2000 or soon after and therefore should be seen only as an interim programme. ATLP however, has promoted the development of a systematic infrastructure and well trained personnel for literacy development which with some amendment and adaptation could provide an overall framework for continuing education.

The majority of Member States of Asia and the Pacific are now implementing continuing education programmes or are ready to begin work in this area. As literacy becomes universal the ideal of lifelong learning and the evolution of a learning society become real possibilities. As ATLP successfully achieves its objectives it could evolve into a new programme to help Member States develop and/or strengthen their continuing education systems. The new programme now offered by UNESCO PROAP as an extension of ATLP has been titled ATLP-CE. This present volume is the first in a series of eight for the ATLP-CE Project.

The issues and challenges of modifying ATLP into a support and training programme for continuing education (i.e. to convert ATLP to ATLP-CE) have been broadly addressed in Volume 10 of ATLP itself. That volume is entitled Post-literacy Activities and Continuing Education (see Figure 4.1). Readers are invited to study the ATLP Volumes, especially Volumes 1, 2, 3 and 10 before proceeding further with ATLP-CE.

B. ATLP-CE and the Evolution of a Learning Society

In developing societies there has been and in most there continues to be an evolution or growth from a stage where the majority of people are illiterate through well defined stages, such as functional literacy for most, to autonomous learning for most to the appearance finally of a learning society in which all adult societal agencies and all citizens are involved in education. The phases of this societal evolution are given in figure 4.3. This is a reproduction of figure 1.1 from ATLP Volume 10.

C. The Essential Framework for ATLP-CE

Under APPEAL there are projects, programmes and activities in three interacting areas (i) Eradication of Illiteracy (EOI) (ii) Universal Primary Education (UPE) and (iii) Continuing Education (CE). In the case of eradication of illiteracy the APPEAL ATLP project has been a main focus. The overall framework for ATLP is illustrated below in Figure 4.4 which is reproduced here from the preface in each ATLP Volume.

Figure 4.3 Stages in the evolution of learning society. To the left and right solid lines indicate phases of maximum involvement and dotted lines represent either extensions or early origins. For example while lifelong learning by definition is from birth to death for adults, meaningful engagement in life-long learning cannot begin until a person is a genuinely autonomous learner. For more detail see ATLP Volume 10.

In ATLP the three target levels in the central column of the diagram (levels A, B and C) are involved in literacy development but there are close links with UPE and CE. The main output of the system is a series of literacy training manuals (1-24) to be developed by Member States using ATLP principles and exemplars as broad guidelines.

A similar type of framework is proposed for ATLP-CE and this is illustrated in figure 4.5

Figure 4.4 The general framework for ATLP

The targets in the central column of the diagram (figure 4.5) are the continuing education personnel at levels A, B and C but as in the case of ATLP there are links with the other components of APPEAL. A key difference between ATLP and ATLP-CE is the nature of the output suggested for Member States. In the case of ATLP it is a training curriculum, trained personnel and a systematic set of Mining materials. In the case of ATLP-CE it is the development of a planned CE policy, an effective infrastructure, trained personnel and a delivery system at local level which will accelerate the evolution of a learning society.

Figure 4.5 The essential framework for ATLP-CE

More specifically the type of delivery system advocated under ATLP-CE has the following elements.

(i) a policy determined at level A based on national development plans;

(ii) an effective and efficient cadre of professionally trained CE personnel at level B.;

(iii) development of a CE network nationally and provincially with direct local access;

(iv) a system of local entry points in the form of district level learning centres at level C;

(v) a broad variety of local providers who are part of the CE network and whose programmes are known to the learning centres. Providers would come from the formal, non-formal and informal education subsectors;

(vi) ready access by all citizens to CE activities at local level, partly through a learning centre and partly by direct contact with a provider.

ATLP-CE provides guidelines for the establishment of such a system, especially on how to train personnel at levels A, B and C. Further details of the infrastructure proposed under ATLP-CE are given in Chapter 5.

At present most Member States of Asia and the Pacific are involved in a range of continuing education activities. A survey suggests that in the main there may be grouped into six categories as follows:

Each of these categories is defined and described elsewhere (Chapters I and 7). While all these types of programme can be accommodated within the overall policies and infrastructure proposed under ATLP-CE, each has its own specific types of delivery systems. ATLP-CE therefore has provided separate guidelines for each type and there is an ATLP-CE Volume on each.

The six types of programme promoted under ATLP-CE also reflect the concerns of the World Conference on Education for All which was held in Jomtien, Thailand in March 1990 and set out in its report World Declaration on Education for All - Meeting Basic Learning Needs. This report states that all citizens should have the knowledge, skills. values and attitudes required to:

It is clear that the ATLP-CE programme types with their focus on personal growth, income generation, quality of life improvement, individual interests and future development are consistent with these principles. ATLP-CE indicates how such needs can be satisfied through a well organized system of continuing education.

E. Scope and Development of ATLP-CE

Resources produced under ATLP-CE consist of eight volumes as follows:

Member States are invited to join in a series of Sub-Regional Workshops and later to run in-country national workshops in the understanding and application of the principles of ATLP-CE. It should be stressed however, that ATLP-CE, like ATLP, is in no way prescriptive. It offers guidelines and exemplars only and these should be interpreted by Member States entirely according to their needs and circumstances.