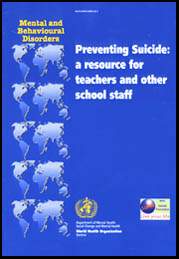 Suicide is a complex phenomenon that has attracted the attention of philosophers, theologians, physicians, sociologists and artists over the centuries; according to the French philosopher Albert Camus, in The Myth of Sisyphus, it is the only serious philosophical problem.

As a serious public health problem it demands our attention, but its prevention and control, unfortunately, are no easy task. State-of-the-art research indicates that the prevention of suicide, while feasible, involves a whole series of activities, ranging from the provision of the best possible conditions for bringing up our children and youth, through the effective treatment of mental disorders, to the environmental control of risk factors. Appropriate dissemination of information and awareness-raising are essential elements in the success of suicide prevention programmes.

In 1999 WHO launched SUPRE, its worldwide initiative for the prevention of suicide. This booklet is one of a series of resources prepared as part of SUPRE and addressed to specific social and professional groups that are particularly relevant to the prevention of suicide. It represents a link in a long and diversified chain involving a wide range of people and groups, including health professionals, educators, social agencies, governments, legislators, social communicators, law enforcers, families and communities.

We are particularly indebted to Professor Danuta Wasserman, Professor of Psychiatry and Suicidology, and Dr Veronique Narboni, of the National Swedish and Stockholm County Centre for Suicide Research and Prevention of Mental Ill-Health, WHO Collaborating Centre, who produced an earlier version of this booklet. The text was subsequently reviewed by the following members of the WHO International Network for Suicide Prevention, to whom we are grateful:

We also wish to thank the following experts for their inputs:

The resources are now being widely disseminated, in the hope that they will be translated and adapted to local conditions - a prerequisite for their effectiveness. Comments and requests for permission to translate and adapt them will be welcome.

PREVENTING SUICIDE A RESOURCE FOR TEACHERS AND OTHER SCHOOL STAFF

Worldwide, suicide is among the top five causes of mortality in the 15- to 19- year age group. In many countries it ranks first or second as a cause of death among both boys and girls in this age group.

Suicide prevention among children and adolescents is therefore a high priority. Given the fact that in many countries and regions most people in this age group attend school, this appears to be an excellent place to develop appropriate preventive action.

This document is primarily aimed at schoolteachers and other school staff, such as school counsellors, school doctors, nurses and social workers, and members of school boards of governors. However, public health professionals and other groups interested in suicide prevention programmes will also find the information provided useful. The document briefly describes the dimension of suicidal behaviour in adolescence, presents the main protective and risk factors behind this behaviour, and indicates how to identify and manage individuals at risk and also how to act when suicide is attempted or committed in the school community.

Suicide methods vary between countries. In some countries, for example, the use of pesticides is a common suicide method, whereas in others intoxication with medicines and car exhausts and the use of guns are more frequent. Boys die from suicide much more often than girls; one reason may be that they resort to violent methods of committing suicide, such as hanging, firearms and explosives, more frequently than girls. However, in some countries suicide is more frequent among girls aged 15-19 than among boys in the same age group, and over the past decade the proportion of girls using violent methods has risen.

Having suicidal thoughts now and then is not abnormal. They are part of the normal development process in childhood and adolescence, as are working on existential problems and trying to understand life, death, and the meaning of life. Questionnaire surveys show that more than half of upper-secondary students report that they have entertained thoughts of suicide.1 Young people need to discuss these topics with adults.2

Suicidal thoughts become abnormal in children and adolescents when the realization of those thoughts seems to be the only way out of their difficulties. There is then a serious risk of attempted suicide or suicide.