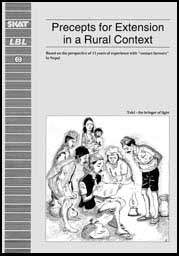 "Tukis" was the name given in the Integrated Hill Development Project (IHDP, 1975-90) to certain progressive individual hill farmers in Nepal. The Tuki system was developed to promote self-help through close contact with the village community. During the fifteen years' duration of the IHDP project, the actual approach and orientation of the Tuki system were subject to several changes. Many people became intensively involved and showed great commitment to the Tukis and the Tuki system. Controversial discussions repeatedly took place on the meaningfulness and purpose of such an approach. IHDP was one of the most important projects of Swiss development aid. It was a wide-ranging attempt to come to grips with the diversity and dynamics of rural development. The Tuki system formed a central aspect of this attempt.

After IHDP ended in 1990, LBL arrived at the idea of reflecting on the history of the Tuki system. The rare opportunity was recognised of tracing a concept over a time span of fifteen years from its beginnings, through its implementation, and to its impact. It was seen as a chance to gain practical insights and new ideas for current work, particularly in the area of extension organisation in a rural context. The energy and commitment that flowed into the Tuki system in turn justify the efforts for this assessment, as future practical operations will be directed towards similar challenges.

The challenges do exist: Extension is in a state of change worldwide. It needs to be newly defined, to tackle new tasks and be re-organised. This is associated with the general re-orientation regarding the meaning and purpose of agriculture, also in the context of the global discussion on ecology. The degree of complexity is increasing as it becomes more and more apparent that indigenous populations hold essential knowledge and have a good grasp of relevant local interrelationships. This knowledge is a crucial contribution to future rural development. It is thus important to appraise experiences where attempts were made to actively involve the local community in the development process. The figure of the Tuki is an interesting example of such a role: On the one hand he is an innovative figure along the original lines of the independent community worker, on the other hand he is comparable to concepts found elsewhere, such as "leader farmer", "contact farmer", "progressive farmer", etc. Of interest is the fact that the Tukis have continued their work even after IHDP had been closed. As this analysis ends in 1990, the experiences made by these "independent" Tukis are not included in this report.

This document is an appraisal and study of the Tuki approach and not an evaluation. We rummaged through all the sources we could find and spoke to many people. We examined the processes from today's viewpoint and consistently tried to gain insights for the future practical work. If in the process problems were examined more closely than successes, this can be accounted for by the fact that we can often learn more from difficulties than from successes.

The information in most sources was incomplete with regard to the motives underlying conceptual changes. Many of the people interviewed still had a strong emotional involvement with the work and their assessment of it varied greatly. This rendered the appraisal more difficult than expected, but also more exciting. The result does not claim to be perfectly balanced. Insights and reflections should not only elicit nods of agreement, but may and should initiate discussions.

Hopefully this report will be of benefit to all those involved in rural extension work, whether as workers in projects, coordination offices or at headquarters. Furthermore, it is hoped that it will enable the significant experiences made in this important project to be incorporated in the design of future extension programmes. We invite comments and feedback from readers, particularly with regard to interesting similarities and challenges, as well as contradictory experiences and ideas.