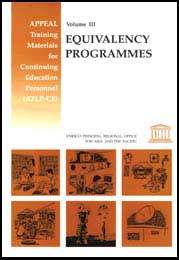 In education, an Equivalency Programme is defined as an alternative educational programme equivalent to existing formal general or vocational education.

Countries in the Region have come to recognize the critical role of education in individual and societal development and ultimately, national development, hence, the constitutional mandate on education. The world-wide economic decline; widening disparities in the distribution of wealth among and within nations; the dire consequences of war, civic strife, crime, environmental degradation, and rapid population growth among others, pose problems for all nations, which unless addressed effectively will constrain development. These global crises have ushered in new challenges to, as well as opportunities for revitalising the education sector for the purpose of building productive human resources.

Most developing countries have yet to achieve universal primary education. Their functional literacy rates are still low. The formal education system does not have adequate resources to satisfactorily meet the needs of its target clientele much less of the out-of-school population. A majority of the population still do not enjoy even the most basic form of education, hence the low level of work productivity.

The urgency of providing education for all as a strategy for accelerating individual and societal development has urged countries to rethink their educational policies and strategies. The aim is to make these policies sensitive and responsive to the complex needs and rapidly changing economic social and political patterns of the nation and the world.

In one country, (Philippines) this has been articulated succinctly by its President when she stated «...we have to rethink our ways of providing education amid scarce resources and go beyond the narrow confines of the classroom. We have to plan how the vision of lifelong learning rather than mere schooling can be the centerpiece around which our educational system can be reformed.»

In some countries, the concept of education outside the formal system is still unacceptable. To most parents, teachers, and students what matters most in one’s social participation is the possession of formal education credentials or certificates/diplomas. This social bias for formal education vis-is non-formal can be re-directed through equivalency programmes in continuing education. A system of accreditation and equivalency can be established and/or expanded with the end in view of maximizing the individual’s socio-economic benefits derived from informal sources of knowledge like the home, workplace, media and life itself; de-stigmatizing and according a measure of respectability to out-of-school education; reducing private demand for school-based learning; and promoting the flexibility of student entry to and from formal and non-formal channels of education. There are two ways of achieving this. One is to totally reform and revitalize formal education and the other is to establish a parallel alternative programmes equivalent to the formal system. The fact of the matter is that some Member States have still to attain Universal Primary Education. Among those who have attained that goal, many have not yet attained universal secondary education. In even the most advanced educational systems retention rates beyond the compulsory school years could be improved. While this situation prevails, massive changes within formal education to cater for the educational needs of all the community, no matter of what age or background, are unlikely and equivalency programmes will be required. Nevertheless a long term goal should be the reform of secondary schooling (see Chapter 8).

B. DEFINITION ROLE AND IMPLICATIONS

As stated at the beginning of this chapter, an Equivalency Programme is defined as an alternative education equivalent to an existing formal general or vocational education programme.

Secondary Equivalency Programmes become necessary to meet the needs of learners who, for one reason or another, are not able to begin or continue their formal secondary education. Under these programmes learning may take place in the home, school, and community with various mechanisms and delivery systems. These may be, therefore, both in-school and out-of-school components.

In most Member States Equivalency Programmes are administered by Departments of Non-Formal Education and they use less formal methods than in the formal school system. This, of course, is not the only possibility. A reformed «formal» system could also offer equivalency programmes.

Differences between the non-formal approach adopted by most Equivalency Programmes and the more traditional practice in formal secondary or vocational schools are summarized in the following table, (table 1.1).

These distinctions are of course becoming blurred as the formal secondary system itself becomes more open and experimental. In Member States such as Australia and New Zealand which have de-emphasised the role of formal examinations, the formal system is becoming more non-formal in its approach with a greater emphasis on «open» education and on self-paced learning. This trend is also evident in other Member States in the Region. In fact if the «formal» system evolved more rapidly to develop a totally flexible and «open» approach to admission, programmes and certification, then equivalency programmes would not be needed.

Under ATLP-CE Continuing Education is defined as the opportunity for adults to engage in lifelong learning. It is the mechanism for achieving a learning society (see volume 10 of ATLP and Volume I of ATLP-CE). Equivalency programmes are one type of continuing education since they provide an opportunity for adults who have completed primary education or its equivalent to continue in structured education such as secondary school type programmes even if they have failed to gain admission to formal secondary education or if they have dropped out of secondary education.

Some forms of equivalency programmes prepare learners for the examinations of the formal secondary school system. Others provide independent awards which are recognized by the community as being equivalent to the awards of the formal system. Whichever the forms, however, the purpose is to provide an opportunity to continue to learns and perhaps to re-enter the formal system at a higher level. Age is not a barrier.

Equivalency programmes, therefore, are an important component of continuing education, especially in Member States which are still aiming to achieve universal secondary schooling and in which the formal system is under strain to accommodate school age learners and so cannot afford to cater for others.