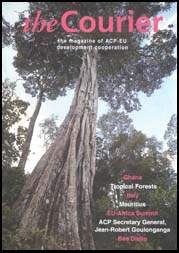 Philip Lowe, Director General DG Development, confirmed at the Fifth Fair Trade Day on 22 February 2000 at the European Parliament in Brussels that Fair Trade is a subject which involves the EU's whole commitment to developing countries.

The European Commission was now trying to develop a more comprehensive and coherent policy through applying the guidelines in its Communication approved in December 1999. Lowe believes it is now time to extend this debate beyond the European institutions and governments to reach the whole of civil society, and to involve the private sector and NGOs more. "Amateurism is not sufficient to succeed," he said.

Professional communication is needed to spread the message about Fair Trade cooperatives and to market Fair Trade issues. If the successes were publicised more, then commercial interest might be aroused.

Support was needed for capacity building and to strengthen institutions and communities to promote micro-credit.

One urgent Fair Trade issue was the new EU Directive on chocolate, debated by the European Parliament in March.

There was intense lobbying on behalf of the 11 million growers of cocoa beans, who see their livelihoods threatened because the new legislation will permit a cut in the cocoa content of chocolate consumed in the EU.

For more information on the Fair Trade Movement, contact:

Only 10% of the world's population benefits from 90% of the world's annual health budget, estimated at $50 -60 billion. This is known as the "10/90 Gap", and is the subject of a new report published by the Global Forum for Health Research.

Adetokunbo Lucas, of the Harvard School of Public Health, and current chairman, denounces the current duplication of effort and inefficiency in the report's preface: "Yet a reallocation of merely 1 % of global health research spending would provide $500 million for priority research needed by the vast majority of the worlds' population of 6 billion."

Four diseases - pneumonia, diarrhoea, tuberculosis and malaria - account for more than 20% of the disease burden in the world but get less than 1 % of global health research funding.

The Global Forum for Health Research was founded in 1997 expressly to put right the disequilibrium. Its 150 members include representatives of the WHO, the World Bank, many international foundations and cooperation agencies. There are direct links to government policy-makers and private sector companies. Meeting annually, the Forum has a declared aim to make one new product available every five years.

Father Engelbert Mveng, Jesuit intellectual and painter studies, how the traditions of the B, a Bantu tribe of Cameroon, have been influenced by the ancient Greek and Roman civilisations, tempered by the Italian Quattrocentro and the French Renaissance. Then he incorporates humanist and African symbolism in his paintings of scenes from the Bible.

The Praia meeting was preparing the Continental African input to the conference Globalisation and Latin Humanism held in New York on 1-3 May 2000, supported by the Italian-based Fondazione Cassamarca.

When small private enterprises and business associations in ACP countries hire consultants to raise their productivity and skills base, or to improve their customer services, they can now get up to half their money back. The EU-ACP Business Assistance Scheme (EBAS) is the brainchild of the European Commission's DG Development and the ACP Group and is aimed at enhancing the competitiveness of existing businesses, particularly in the manufacturing sector.

EBAS will refund up to 50% of the costs of consulting assignments, with a ceiling of €70,000 per application. Any business (except for start-ups or those with state subsidies) may apply. Applications and disbursements will be handled rapidly by Internet, email and fax (12-15 working days for each transaction is the target). They should be submitted to one of the four EBAS regional offices:

· Abidjan for Central and Western Africa,
· Bridgetown for the Caribbean
· Gaborone for Southern Africa
· Nairobi for East Africa.

A central coordinating unit in Brussels will obtain the official approval from the European Commission and pay out the funds.

EBAS was set up in November 1999 and will last three years. An information team is now touring ACP countries to explain the scheme in detail.

Application forms and further details (in English, French and Portuguese) from http://www.ebas.org or contact:

Partnership not an option but a necessity

The OECD's 1999 Development Cooperation Report, published on 14 February 2000, claims that after more than five years of continuous decline, official development assistance (ODA) rose in 1998 by nearly 10%. This means US$53 billion in real terms. But while this has gone up, the ODA/GNP ratio has fallen to nearly 0.25%, well below the average of 0.33% maintained in the 1970s and 1980s. In dollar terms this means a shortfall of $20 billion dollars.

Despite the Asian crisis, private flows continue to be far larger than public aid flows (see chart). In the aftermath of Seattle, implementation of poverty reduction strategies is now the central priority of development cooperation. Thus sustainable development is displacing the traditional structural adjustment approaches used by major donors.

The OECD notes that an increasing number of developing countries are taking initiatives to establish implementation frameworks for their development based on comprehensive long-term visions and more systematic coordination. The major challenge will be to make these partnerships work.

A new drug is needed for malaria, which kills between 1,7 and 2,5 million people annually and infects 300 million. Mosquitos are increasingly resistant to today's drugs. At present the amount of money spent annually on malaria research is equivalent to half the cost of building a jumbo jet. While the pharmaceutical industry sees little commercial interest in developing a new drug, much useful precompetitive research exists that has no commercial outlet.

A new public/private partnership has created a public venture capital fund: New Medicines for Malaria Venture (MMV). There is synergy with the WHO's (World Health Organisation) Roll Back Malaria campaign.

MMV is chaired by Louis Currat, Executive Secretary of the Global Forum for Health Research, many of whose partners are involved. The public sector will provide funding ($15 million at first, due to double later) while the private sector will contribute expertise and the results of previous research. A tender was sent out in January to pharmaceutical firms and academic centres, and it is expected that the most promising proposals for funding will be selected before the end of the year.