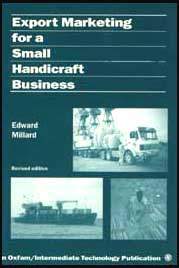 3.4 The costs of distribution

As products pass through the distribution chain from producer to consumer they bear costs. Consider a purchase by Oxfam Trading of alpaca sweaters from Peru. We buy from a Peruvian ATO which works with women's groups in the countryside. Between the producer and the consumer (our customer) the following costs will be added to the product:

There could be variations in this list of distribution costs. Some countries levy taxes on exports. This would be one more cost. Most handicrafts enter Britain without being subject to duty. Some clothing items bear duty, although not usually hand-knitted jumpers. There are a considerable number of costs, and these will be applied even in the shortest distribution chain. When additional traders enter the picture, there are further handling costs and profits for the products to bear.

Who is going to bear these costs, the exporter or the importer? It is an important question, because misunderstanding often occurs in an export contract, causing an argument about whose responsibility it is to pay certain costs. The answer is that it depends on the terms of the contract. It must be made absolutely clear between exporter and importer when making a contract precisely which costs are included in the price quoted.

The distribution chart can be simplified by amalgamating certain costs, as shown in Figure 7.

The price which an exporter quotes could be based on assuming responsibility for costs in Box 1, or 1 + 2, or 1 + 2 + 3. It would never include those in Box 4. There are terms to describe these three different ways of quoting export prices:

(There are other possibilities, but they are not commonly used.) In the handicraft trade, the majority of prices are quoted on the basis of either ex works or FOB. This means that the importer has the responsibility to pay for the costs of international shipping and insurance.

FOB is the basis for pricing which most suits the importer. This is because the importer knows how much the product is actually costing when it leaves the country of origin. With an ex works basis of pricing, the importer can have some nasty surprises. Oxfam Trading frequently does. For example, we imported some palm leaf picnic baskets from southern India. They had to travel from the production centre inland to the port. Because they were very bulky, several lorries were required, and we collected a bill for several hundred pounds. We had not realised transport would cost so much when calculating our own selling prices, and consequently we lost money. Moreover, how could we know if the exporter negotiated the best possible rate? It is a very trusting importer who agrees to pay charges over which no control can be exercised, nor the amount be known before shipment. Few importers will therefore feel happy about ex works prices.

However, for inexperienced exporters, ex works is the most favourable basis of pricing. They know how much it costs to produce the product, but have little knowledge about the costs of local transport or export formalities. If the importer insists that they quote an FOB price, they are worried that if they underestimate the costs, the contract will be loss-making; whereas if they overestimate them, their prices may become uncompetitive.

It is advisable for exporters to move towards an FOB basis of export pricing as soon as they can. Most exporters calculate from their experience the average of the costs in Box 2 as a percentage of their sales. They then add this percentage to the ex works price. It might be that on some consignments the actual costs are higher or lower than the amount allowed, but over a period it should average out about right. If not, they need to review the percentage added in the light of the latest bills.

Many of Oxfam Trading's difficulties with exporters occur when there is misunderstanding of what the terms mean. This is why the details should always be spelt out in a new trading relationship. Many exporters have quoted us prices on an FOB basis and then sent us an invoice which adds some charges incurred in the country of origin, or the cost of sending documents by courier. FOB should mean that the importer incurs no costs until the consignment leaves the country of origin.

We once had a difficulty with an exporter in Kenya who quoted us FOB prices and subsequently sent us an invoice for local transport costs, and additional packing. When we queried it, the explanation came back that the basis of FOB was to send the goods by air freight from the capital city, Nairobi, which is inland. As we had requested sea freight, additional transport was needed to send the consignment to the port, Mombasa, and extra packing for better protection. This was reasonable enough, but we explained that the price list should then state clearly FOB Nairobi, packed for air freight, so that the customer would be prepared for the additional cost if sea freight was used.

We have had similar misunderstandings with exporters over the meaning of ex works. It is usually taken to mean that the product is labelled, packaged and packed for export, and that only the costs of internal transport and export formalities are omitted. Nevertheless, we have received bills for printing labels and even for plastic bags and packing.

In Figures 8 and 9, typical price movements are shown in the total export distribution process. It is difficult to generalise about costs of transport for handicrafts. There are very large variations according to which type of products are being exported from which country to which. Oxfam Trading's average import costs are not 23 per cent, but less than 20 per cent. Transport, however, is not the largest distribution cost; that is incurred in the country of sale. In the example given, a product landing in an importer's warehouse in Britain at £1.60 would be sold to a consumer at over £5.00, five times more than the producer received for making it, and about four times more than its FOB price. This is not untypical. As a rule of thumb, importers think in terms of FOB x 4 as the final selling price when deciding whether or not to take an interest in a product. When we make our buying decisions in Oxfam Trading, we estimate costs rather more precisely according to the actual type and origin of the product. However, if we are selecting samples while visiting an exporter, FOB x 4 is our guide. If we think the product could not sell in Britain at four times its export price, it is unlikely that we would select the sample.

The explanation for the large increase in price within the country of sale is the high cost of living there. The major costs are: rent of warehouse, rent of retail premises or publication of catalogue, fixtures and fittings, staff wages, heating and lighting, packing materials, transport, interest and promotional materials. Employers also incur costs for staff benefits, such as medical schemes and pensions. Additionally, there will be a profit for the wholesaler and retailer, and a sales tax. The costs of retailing are higher than wholesaling because distribution is in smaller quantities, so that more space and staff are required to sell the products. Where the wholesaler and retailer are the same, then the overall costs can be reduced, but not by very much. Most of the same functions still have to be performed, except wholesale selling.

In order to recover these costs, we need to add the sort of mark-up to the products we buy which is shown in Figure 9. For expensive products we may add a smaller percentage. Most handicrafts are of relatively low value, and many are of large volume. To import, store and distribute laundry baskets, for example, not only incurs high costs of transport, but also takes up a considerable amount of expensively rented warehouse space. Even on products which we can import and store cheaply, it is extremely unusual for us to sell at less than three times the FOB price.

The procedures and costs of international distribution are poorly understood by many handicraft exporters, and especially small, inexperienced businesses. But it is very important to understand them. How can you be effectively engaged in the export business, and give good service to the customer, if you do not know the procedures for making the consignment arrive safely and cost-effectively in your customer's country?

The export-import procedure, as described in Boxes 2, 3 and 4 of Figure 7 comprises: