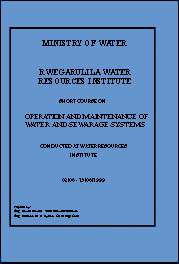 4. Inspections made before putting the unit into operation for first time

It should be pointed out that even a newly constructed water supply system has to be checked before it is commissioned in order to ensure that it is properly constructed and that it works as intended. This first type of inspection is usually a part of the construction phase.

The more painstaking the construction work, and the more thorough the first inspection and the ensuing corrective work the less will be the trouble in the life of the structure as far as the structural condition is concerned.

This first and most important inspection is the inspection which is made after the “completion” of the construction work and before the unit is put into operation for the first time. This inspection and the remedial work which follows it are the basis for a sound structure which will function provided it is properly maintained and operated in the future.

The team which was involved in the construction should not make the inspection by itself. The most appropriate members of the inspection team ought to be persons who would be responsible for the operation and maintenance of the unit or system.

The team which was involved in the construction would itself have made an inspection of the work and carried out improvement works as necessary before announcing that it is ready to hand over the unit which has been completed.

The structures will be inspected by a team whose members represent at least the group which is responsible for the construction on the one hand and the future operation and maintenance on the other hand.

In order to facilitate the work the inspection should follow a systematic pattern using a check list.

A record is made of the inspection and agreement reached regarding the works (if any) which have to be carried out before the unit is put into operation.

The second inspection will verify whether all works agreed upon during the first inspection have been carried out properly.

Tests are made to check the performance of the completed unit.

Water retaining structures including passages of all pipework and fittings which are built - in have to be tested for watertightness.

A record is made of the tests and their results.

4.3 Disinfection and putting into operation

After the successful completion of the works and the satisfactory results of the tests, the units will be cleaned thoroughly and disinfected. Then the units are put into operation.