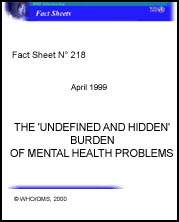 Mental illnesses affect the functioning and thinking processes of the individual, greatly diminishing his or her social role and productivity in the community. In addition, because mental illnesses are disabling and last for many years, they take a tremendous toll on the emotional and socio-economic capabilities of relatives who care for the patient, especially when the health system is unable to offer treatment and support at an early stage. Some of the specific economic and social costs include:

· lost production from premature deaths caused by suicide (generally equivalent to, and in some countries greater, than deaths from road traffic accidents);

· lost production from people with mental illness who are unable to work, in the short, medium or long term;

· lost productivity from family members caring for the mentally-ill person;

· reduced productivity from people being ill while at work;

· cost of accidents by people who are psychologically disturbed, especially dangerous in people like train drivers, airline pilots, factory workers;

· direct and indirect financial costs for families caring for the mentally-ill person;

· unemployment, alienation, and crime in young people whose childhood problems, e.g., depression, behaviour disorder, were not sufficiently well addressed for them to benefit fully from the education available;

· poor cognitive development in the children of mentally ill parents, and the

· emotional burden and diminished quality of life for family members.