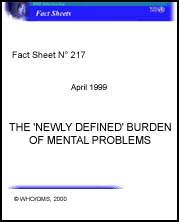 · Increasingly sophisticated methods to measure health and its burden, in particular the DALY (Disability Adjusted Life Year), have helped to provide a more balanced conception of the needs and priorities in the area of health for both developing and developed countries.

What the DALY does is to quantify not only the number of deaths but also the impact of premature death and disability on a population. It combines them into a single unit of measurement of the overall burden of disease.

One DALY is one lost year of healthy life. As the table below shows, mental problems accounted for approximately 10% of all DALYs lost in 1990. They are as relevant in developing countries as in industrialized societies.

· It is also of great significance that 5 of the 10 leading causes of disability worldwide (major depression, schizophrenia, bipolar disorders, alcohol use, obsessive compulsive disorders) are mental problems. They are as relevant in developing countries as they are in industrialised societies

While there have been dramatic improvements in physical health in most countries, particularly unprecedented improvements in mortality rates, the mental component of health has not improved over the past 100 years. In fact, in many instances it has deteriorated significantly.

· Average life expectancy in low income countries such as Democratic Republic of Congo, Egypt and India have risen from 40 to 66 years, infant mortality rates have plummeted, smallpox has been eradicated and many other infectious diseases brought under stricter control.

· In sharp contrast, mental, behavioural and social health problems, involving hundreds of millions of individuals, have become much bigger contributors to the global health burden. That emerges clearly from the table below:

Mental problems tend to proliferate as a result of complex, multiple biological, psychological and social factors such as war, poverty and limited access to resources.

Mental problems are experienced by those suffering from serious and/or chronic 'physical' diseases and from war and trauma. They exist even when the above conditions are not present.

· In most cases, a complex interaction process between biological, psychological, and social factors contributes substantially to the development of mental health and neurological problems.

· Strong links have been made between mental health problems with a biological base, such as depression and changes in social behaviour, interpersonal support, personal coping, and adverse social conditions, such as high unemployment, limited education, gender discrimination, human rights violations, and poverty.

The future will bring an exponential increase in mental health problems

· The burden of mental and neurological problems is likely to become even heavier in the coming decades and will raise serious social and economic obstacles to global development unless substantive action is taken.

· Given the ageing of the population, exacerbating social problems and unrest, the burden of mental problems will grow substantially.

The incidence of depressive illness increases with age, and it is predicted that depression will be the second leading cause of disease burden in 2020. This is a sobering thought.

The rapidly rising numbers of persons affected by violent conflicts, civil wars and disasters, and the growing number of displaced persons will contribute to psycho-social problems and interpersonal violence within communities. Such populations have been systematically shown to have increased rates of mental disorders, including post-traumatic stress, depression and alcoholism. It is, therefore, urgent to deal with mental problems.

There are groups at special risk of developing mental problems

· Beyond the striking statistics related to suffering from defined mental disorders, there are many categories of people who, because of extremely difficult circumstances, are at special risk of being affected by mental problems. Amongst them are persons living in extreme poverty, such as slum-dwellers; children and adolescents experiencing disrupted nurturing, abused women, abandoned elderly people, others traumatised by violence, such as the victims of armed conflicts, migrants, including refugees, and many indigenous persons.

Since physical illness and disease, wars, violence and poverty in the world are unlikely to disappear, and biological predispositions to mental problems will continue to affect a great many people. Mental problems need to be addressed now and in the future.

Mental health problems will only be addressed when there is sufficient awareness, commitment and resource allocation

Mental health and well-being have nearly always had a lower priority than communicable diseases and other 'physical' maladies, despite their significant impact on mortality and morbidity. But we are now in a position to make use of the wealth of knowledge and technology that allows us to effectively manage, treat and prevent a wide range of mental health, neurological and substance use problems.

· It is time to review priorities and commitments and to recognize that substantial benefits will accrue through investing in mental health. Many communicable diseases are now under control, but only as a result of public awareness and a commitment to address the problem.

Key mental health issues for all countries of Europe

· What is the level of responsibility of the public sector in addressing mental health issues and maintaining the highest possible standards for mental health in the midst of economic recession and an associated decline in resources?