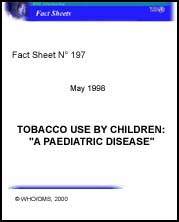 TOBACCO USE BY CHILDREN: ''A PAEDIATRIC DISEASE''

Studies carried out in different countries have invariably shown that the majority of smokers start using tobacco while in their teenage years, sometimes even earlier. Soon after initiation, smoking becomes an intractable habit because of tobacco's powerful addictive properties. This has led Dr David Kessler, Commissioner of the United States' Food and Drug Administration to say: "Nicotine addiction begins when most tobacco users are teenagers, so let's call this what it really is: a paediatric disease."

Tobacco use is growing among young people while the age of smoking initiation is declining.

à Smoking prevalence among US high school students increased from 28% in 1991 to 36% in 1997. And smoking can be just as prevalent among youth in developing countries. A survey, whose results were published in 1996, in one region of Argentina estimated that 40% of adolescents aged 13-18 were smokers.

à More than 80% of American youth who smoke start smoking before the age of eighteen, In many Latin American countries, 75% or more of smoking initiation occurs between the ages of 14 and 17.

Studies carried out in many countries show that if young people do not begin to use tobacco before the age of 20, they are unlikely to start smoking as adults. This highlights the importance of preventing smoking among young people.

Reasons: There are a number of complex and interacting reasons why children and adolescents "contract" this disease. They mistake smoking for an attribute of independence - an image they see in adults who smoke and skillfully built by tobacco advertising.

à Tobacco advertising plays a key role in encouraging young people to smoke. In countries around the world, billions of dollars are being spent on sophisticated tobacco advertising and promotions, portraying tobacco use as "fun", "glamourous", "mature", "modern", and "Western".

Children and Environmental Tobacco Smoke (ETS): The tobacco smoke of others has serious adverse health affects on infants and children.

· Due to maternal smoking and ETS, children's health may be compromised from before the time they are born. Babies born to women who smoke during pregnancy, as well as those infants exposed to ETS have a significantly greater risk of dying of sudden infant death syndrome (SIDS).

· Children exposed to ETS are more likely to suffer from respiratory illnesses, are at risk of impaired lung function, and have an increased frequency of middle-ear infections.

· Children exposed to ETS also have an increased chance of developing asthma, and for those children who already have asthma, ETS can exacerbate the problem.

Nicotine Addiction In Young Smokers: What often starts out as an "act of independence" may rapidly become an addictive dependence on tobacco.

The younger people start smoking cigarettes, the more likely they are to become strongly addicted to nicotine. By the time teenagers have been smoking on a daily basis for a number of years, the smoking habit and addiction levels may well have become entrenched, and they are faced with the same difficulties in quitting as adult smokers. Although intentions to quit and quit attempts are common among teenagers, only small numbers of teenagers actually stop.

à Studies by health scientists in the United States have found that about three-fourths of young smokers consider themselves addicted, while a majority of adolescent smokers in Australia have tried to quit and found it very difficult. in another US study, about two-thirds of adolescent smokers indicated that they wanted to quit smoking, and 70% said that they would not have started if they could choose again.

Tobacco Industry and Young Smokers: Although the tobacco industry claims that it does not want young people to smoke, their own documents, recently released to the public, show a longstanding interest in young smokers. The results of the above-mentioned US studies are remarkably similar to the conclusions of studies conducted years earlier for a Canadian tobacco company.

à "However intriguing smoking was at 11, 12 or 13, by the age of 1 17 many regretted their use of cigarettes for health reasons, and because they feel unable to stop smoking when they want to. '

à The desire to quit seems to come earlier now than before, even prior to the end of high school. In fact it often seems to take hold as soon as the recent starter admits to himself that he is hooked on smoking. However, the desire to quit, and actually carrying it out are two quite different things, as the would be quitter soon learns. "'

Public Policies and Tobacco Use by Children: Public policies can have a strong influence on whether or not children smoke. In drafting such policies, one should take into consideration that:

· Children are likely to start smoking if they grow up in an environment where tobacco advertising is prolific, where smoking rates are high among adults (including those that serve as role models for young people), where tobacco products are cheap and easily accessible, and where smoking is unrestricted in public places.

· Educational programmes and health promotion campaigns can serve a useful role in tobacco control, particularly in countries where the harms of tobacco use are not widely known. However, unless they are backed up by strong public policies, which help young people refrain from using tobacco, educational programmes have only modest results. Such education programmes and health promotion campaigns should be placed in the overall context of strong and coherent tobacco control policies.

· Health promotion campaigns to persuade young people not to smoke will likely be far more successful when increased attention is also given to helping adults quit smoking.