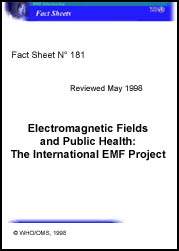 Recent years have seen an unprecedented increase in the number and diversity of sources of electric and magnetic fields (EMF) used for individual, industrial and commercial purposes. Such sources include television, radio, computers, mobile cellular phones, microwave ovens, radars and equipment used in industry, medicine and commerce.

All these technologies have made our life richer and easier. Modern society is inconceivable without computers, television and radio. Mobile phones have greatly enhanced the ability of individuals to communicate with each other and have facilitated the dispatch of emergency medical and police aid to persons in both urban and rural environments. Radars make air travelling much safer.

At the same time, these technologies have brought with them concerns about possible health risks associated with their use. Such concerns have been raised about the safety of cellular mobile telephones, electric power lines and police speed-control “radar guns”. Scientific reports have suggested that exposure to electromagnetic fields emitted from these devices could have adverse health effects, such as cancer, reduced fertility, memory loss, and adverse changes in the behaviour and development of children. However, the actual level of health risk is not known, although for certain types of EMF, at levels found in the community, it may be very low or non-existent.

The conflict between concerns about possible health effects from exposure to EMF and the development of electricity supply and telecommunications facilities have led to considerable economic consequences. For example, electrical utilities in many countries have had to divert high voltage transmission lines around populated areas and even halt their construction. The installation of base stations for mobile telephone systems has been delayed or has met opposition from the public because of concerns that the RF emissions from these base stations might cause cancer in children. In the United States, for example, 85% of the total number of base stations needed have yet to be constructed.

Measures to significantly reduce electric and magnetic fields in the environment, below what is now commonly accepted, are costly. It has been estimated that concerns about EMF and health are now costing the United States economy alone some US$1 billion annually. However, if unacceptable health risks do occur, costly prevention measures will be required.

In May 1996, in response to growing public health concerns in many Member States over possible health effects from exposure to an ever-increasing number and diversity of EMF sources, the World Health Organization (WHO) launched an international project to assess health and environmental effects of exposure to electric and magnetic fields, which became known as the International EMF Project.

The International EMF Project will last for five years. It will bring together current knowledge and available resources of key international and national agencies and scientific institutions in order to arrive at scientifically-sound recommendations for health risk assessments of exposure to static and time varying electric and magnetic fields in the frequency range 0-300 GHz. This range includes static (O Hz), extremely low frequency (ELF, >0 - 300 Hz) and radio-frequency fields (RF, 300 Hz - 300 GHz).

This Project has been devised to provide authoritative and independent peer-review of the scientific literature, and identify and fill gaps in scientific knowledge by establishing protocols for the conduct of research using compatible and comparable methodologies, and by encouraging more focused research that should lead to better health risk assessments in the EMF domain. The International EMF Project:

An International Advisory Committee (IAC), consisting of representatives of international organizations, independent scientific institutions and national governments supporting the Project, provides oversight. All activities are coordinated and facilitated by the WHO Secretariat.

Over 40 national governments have contributed to or are interested in the activities of the Project.

Scientific activities of the International EMF Project include review meetings to arrive at health risk assessments for various types of electromagnetic fields and their specific application. Independent expert groups, using accepted assessment criteria, review the literature on biological effects of EMF. These reviews are timed to allow needed research to be completed so that the results can be included in the publications on health risk assessments.

The International EMF Project will publish documents on risk perception, risk communication and risk management in order to improve communications among those concerned, including an increasingly sceptical public and workforce, about possible health risks of EMF exposure.

As a result of the International EMF Project, a number of monographs are expected to be published by WHO in the Environmental Health Criteria series. They will address the health effects of exposure to RF, ELF and static fields, as well as risk perception, communication and management, and public and occupational health policy.

It is expected that the Project will facilitate the development of universally acceptable standards on limits of human exposure to EMF, standards on the measurement and compliance of EMF emissions for various devices, and a better understanding on how best to communicate information to the public and workers on possible risks from EMF exposure.

All WHO Press Releases, Fact Sheets and Features, as well as specific information on this subject can be obtained on Internet on the WHO home page http://www.who.ch/