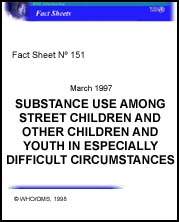 Childhood and adolescence are times of experimentation, exploration, curiosity and search for identity. Such quests can involve risk taking. At times, this is manifested in risks to personal health, such as the of use of alcohol, tobacco, pharmaceuticals, inhalants, illicit drugs and other psychoactive substances.

It is believed that young people from problematic backgrounds, further referred to as "children and youth in especially difficult circumstances", are more vulnerable and more likely to continue or escalate their substance use and to develop problems.

These "especially difficult circumstances" are associated with poverty, family disintegration, relocation, discrimination and the lack of suitable alternative accommodation if the child cannot stay at home.

The notion of "children and youth in especially difficult circumstances" (CYEDC) covers a broad range of populations at risk of developing health and other problems. Within this group are street children, working children, refugee and displaced children, indigenous and minority youth, children and youths with mental and physical disabilities, youths in institutional care (such as detention centres), victims of war and civil unrest, survivors of natural disasters, individuals with learning difficulties, children of dysfunctional and abusive families and those who have been sexually exploited.

Early onset and continued use of illicit substances is more likely to occur among young people from communities which: have a low quality of life and inconsistent support of their children; have low educational aspirations; lack closeness and involvement in the children's activities and exert weak control and discipline; explicitly or implicitly approve of substance use and resort to it on a regular basis; and emotionally, physically or sexually abuse their children.

Due to the imprecise definition of CYEDC, the heterogeneity of these risk groups and the often hidden nature of substance use within these populations, it is difficult to estimate the extent of the problem. Available statistics may only indicate its magnitude.

· In 1992, it was estimated that 40% of the world's population was aged 19 years or less, of whom 86% lived in developing countries. A large proportion of these children and youths lived in poverty.

· Worldwide, over 130 million children, two-thirds of whom are girls, have no access to primary school education. In developing countries, one in four students entering school is estimated to drop out before completing primary education. Today, lack of education is especially damaging because both individual and societal well-being are increasingly dependent on intellectual competence based on literacy and knowledge of basic arithmetic.

· According to the estimates of the International Labour Organization (ILO) in 1996, in developing countries alone, there were at least 120 million children between the ages of 5 and 14 who were fully at work.

· Between 5 and 10 million children under the age of ten years will be orphaned by the end of the 1990s as a result of AIDS-related deaths of parents; 90% of these children live in Africa. As much as 75% of HIV transmission takes place before the age of 25 years in the epidemics of East and Southern Africa.

The common denominator for all of these children and youths is the fact that they are more vulnerable than their peers of the same age living in a supportive environment. It is also more likely that these young people have few, if any, positive attachments, and few positive role models. They are likely to be marginalized within their communities and have fewer opportunities to learn life skills. Their immediate community often does not have the resources to prevent nor treat substance abuse.

In a stressful environment, the use of psychoactive substances by these young people often has a purpose. Such substances may be used to keep them awake to be able to work, to relieve hunger, to sleep or to anaesthetize physical or emotional pain. However, their use increases health risks and introduces other problems, such as their exploitation and criminal activity.

The substances used by CYEDC are usually those which are cheap and most readily available. For example, glue in market places, solvents in industrial areas, coca products in the Andean region and opiates in opium producing areas, as well as alcohol, tobacco, cannabis and pharmaceutical drugs.

Among a wide range of disparate target groups covered by the umbrella term CYEDC, one group - street children - is at the highest risk of developing substance abuse problems and, therefore, deserves special attention. The phenomenon of street children is not new. Almost every country has witnessed large groups of homeless children who appear in large urban settings at some stage of history.

In recent years, the problem of street children has worsened throughout the world due to increasing family separations and conflict brought about by urbanization, economic crisis, political change, civil unrest, wars, as well as natural disasters and epidemics.

· Because of political, economic and other considerations, the criteria for defining "street children" vary from country to country and with time. Therefore, it is difficult to arrive at any precise global estimates. Today, different estimates put the number of street children at between 10 and 30 million worldwide.

· In the countries of Latin America, by all accounts the problem is especially acute. However, because of the above-mentioned difficulties and with few exceptions, there are no reliable data on street children.

· In Asia, the situation is no better. In Metro Manila (population 9 million), there are at least 60,000 street children.

· In Africa, the problem of street children is the least documented. However, multiple factors contributing to the disintegration of families - continued urbanization, economic crises, epidemics, military and ethnic conflicts, and refugee movements suggest that the problem has been intensifying over the last five years.

· Even affluent countries are affected. In Toronto (population 3 million) the number of street youth is conservatively estimated to be between 3,000 and 5,000.

· Throughout the world, most children on the street are boys. However, there is now increasing evidence of girls on the street.

STREET CHILDREN AND SUBSTANCE USE

Street children support themselves by working, begging, stealing, selling sex and by trafficking in licit and illicit substances. Many depend for their existence on the assistance of caring adults and organized services provided by governments or private agencies. They help one another to survive. Such help is an important part of the culture of street life.

· Most street children have virtually no access to health care and community services. As a result, continued substance use among street children usually has serious health and social consequences. In South Africa, for example, as many as 9 out of 10 street children are thought to be dependent on glue.

· The age of initial substance use among street children is very young - as young as five years of age. In Colombia and Bolivia, 8 year old children have been reported dealing in and smoking basuco cigarettes, a low grade by-product of cocaine laced with kerosene and sulphuric acid.

The consequences of substance use by street children and CYEDC in general are diverse, including acute and chronic health and emotional problems, disruption of interpersonal relationships, school failure, social marginalization and criminal behaviour. Their behaviour as children will most likely have an impact on their health as adults, and the health of their own children.

In 1992, the WHO Programme on Substance Abuse (PSA) initiated a special project "Street Children and Substance Abuse". The project has been aimed at developing a framework within which specific organizations could assess the nature and extent of the problem of street children and substance abuse in individual communities in order to develop and implement appropriate responses. The initial funding for the project came from the United Nations Drug Control Programme (UNDCP).

Phase I (1992-1993) and Phase II (1993-1996) of the project have seen the development of a programme methodology and infrastructure through a global network of street children organizations.

In Phase I, PSA-developed methodologies and instruments were piloted in seven countries. In-depth interviews were conducted with street children all over the world. In Phase II, supported by the International Organization for Good Templars (IOGT International), the MENTOR Foundation* and several Latin American First Ladies, the project was expanded to over 30 sites throughout the world. A training manual for street educators and a monitoring and evaluation manual for street children projects were prepared.

An implementation plan for Phase III of the Street Children Project was discussed at a planning meeting, which was held from 27 to 31 January 1997 in Geneva, supported by the MENTOR Foundation, with participants from 14 countries and representatives of 7 international organizations and 4 international NGOs.

In Phase III (from 1997 onwards), proven prevention approaches will be widely disseminated; promising and innovative ones will be tested out. Project methodology, including training and evaluation manuals, will be translated into several languages and distributed to interested organizations directly and through such partners as UNICEF, UNESCO, MENTOR Foundation, the Arab Council for Childhood and Development, International Federation of Red Cross and Red Crescent Societies, CHILDHOPE, and Terre des Hommes.

A number of existing organizations and networks will facilitate regional training. Such organizations have demonstrated the capacity for quality training which addresses substance use and related problems among CYEDC, including street children.

Existing street children programmes which have proven to be effective will be identified from different regions to be further developed as Model Street Children Programmes - a reliable source of experience in drug prevention approaches. A network of regional research centres will be identified and a joint programme of research on the prevention and treatment of substance use among street children will be developed.

* The MENTOR Foundation is an international nongovernmental organization based in Geneva, Switzerland, which works to prevent substance abuse among children and youths worldwide.