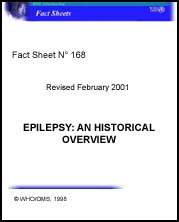 Basic concepts surrounding epilepsy in ancient Indian medicine were refined and developed during the Vedic period of 4500-1500BC. In the Ayurvedic literature of Charaka Samhita (which has been dated to 400BC and is the oldest existing description of the complete Ayurvedic medical system), epilepsy is described as "apasmara" which means "loss of consciousness". The Charaka Samhita contains abundant references to all aspects of epilepsy including symptomatology, etiology, diagnosis and treatment.

Another ancient and detailed account of epilepsy is on a Babylonian tablet in the British Museum in London. This is a chapter from a Babylonian textbook of medicine comprising 40 tablets dating as far back as 2000BC. The tablet accurately records many of the different seizure types we recognize today. In contrast to the Ayurvedic medicine of Charaka Samhita, however, it emphasizes the supernatural nature of epilepsy, with each seizure type associated with the name of a spirit or god - usually evil. Treatment was, therefore, largely a spiritual matter.

The Babylonian view was the forerunner of the Greek concept of "the sacred disease", as described in the famous treatise by Hippocrates (dated to the 5th Century BC). The term "seleniazetai" was also often used to describe people with epilepsy because they were thought to be affected by the moon’s phases or by the moon god (Selene), and hence the notion of "moonstruck" or "lunatic" (the Latinized version) arose. Hippocrates, however, believed that epilepsy was not sacred, but a disorder of the brain. He recommended physical treatments and stated that if the disease became chronic, it was incurable.

While both Hippocrates and the Charaka Samhita provided this less spiritualized understanding, the perception that epilepsy was a brain disorder did not begin to take root until the 18th and 19th Centuries AD. The intervening 2,000 years were dominated by more supernatural views. In Europe, for example, St Valentine has been the patron saint of people with epilepsy since medieval times. Sites where St Valentine was thought to have lived or visited became pilgrimage destinations to get cured. These sites included Rome and Terni (where St Valentine was Bishop) in Italy, Ruffach in France (where a hospital for epilepsy was later built), Poppel in Belgium, and Passau in Germany.

Throughout this time people with epilepsy were viewed with fear, suspicion and misunderstanding and were subjected to enormous social stigma. People with epilepsy were treated as outcasts and punished. Some, however, succeeded and became famous the world over. Among these people were Julius Caesar, Czar Peter the Great of Russia, Pope Pius IX, the writer Fedor Dostoevsky and the poet Lord Byron (for more information on famous people with epilepsy you may wish to visit the following web site: http://www.epilepsiemuseum.de).

In the 19th Century, as neurology emerged as a new discipline distinct from psychiatry, the concept of epilepsy as a brain disorder became more widely accepted, especially in Europe and the United States of America (USA). This helped to reduce the stigma associated with the disorder. Bromide, introduced in 1857 as the world’s first effective anti-epileptic drug, became widely used in Europe and the USA during the second half of the last century.

A hospital for the "paralyzed and epileptic" was established in London in 1857. At the same time a more humanitarian approach to the social problems of epilepsy resulted in the establishment of epilepsy ‘colonies’ for care and employment. Examples include Dianalund in Denmark, Chalfont in England, Bielefeld-Bethel in Germany, Heemstede in Holland, Sandviakain in Norway and the epilepsy centre in Zurich in Switzerland.

The foundation of our modern understanding of the derangement of function seen in epilepsy (pathophysiology) was also laid in the 19th Century with the work of Hughlings Jackson. In 1873 this London neurologist proposed that seizures were the result of sudden brief electro-chemical discharges in the brain. He also suggested that the character of the seizures depended on the location and function of the site of the discharges. Soon afterwards the electrical excitability of the brain in animals and man was discovered by David Ferrier in London, Gustav Theodor Fritsch and Eduard Hitzig in Germany.

Working in Germany during the 1920s, Hans Berger, a psychiatrist, developed the human electroencephalograph (EEG - brainwaves’). Its important application from the 1930s onwards was in the field of epilepsy. The EEG revealed the presence of electrical discharges in the brain. It also showed different patterns of brainwave discharges associated with different seizure types. The EEG also helped to locate the site of seizure discharges and expanded the possibilities of neurosurgical treatments, which became much more widely available from the 1950s onwards in London, Montreal and Paris.

During the first half of this century the main drugs for treatment were phenobarbitone (first used in 1912) and phenytoin (first used in 1938). Since the 1960s, there has been an accelerating process of drug discovery, based in part on a much greater understanding of the electrochemical activities of the brain, especially the excitatory and inhibitory neurotransmitters. In developed countries in recent years, several new drugs have come into the market and seizures can now be controlled in 70% to 80% of newly diagnosed children and adults.

Another recent stimulus towards the understanding and treatment of epilepsy in the last few decades has been the development of neuroimaging equipment. Such technology has revealed many of the more subtle brain lesions responsible for epilepsy. Any type of brain lesion (for example, trauma, congenital, developmental, infection, vascular, tumour, degenerative etc.) might lead to epilepsy in some people.

During the last few decades greater attention has been paid to quality of life, i.e; psychological and social issues, for people with epilepsy, although progress is slow and services are still poor. It is also the case that most of the advances in developed countries are of relevance but not available for the 80% of people with epilepsy who live in developing countries -stigma is still the same in both developed and developing countries. For many of these people supernatural views, social stigma and discrimination still prevail. Even in developed countries the disorder is still shrouded in secrecy and people prefer not to reveal or discuss their condition.

Of the 50 million people in the world with epilepsy, some 35 million have no access to appropriate treatment. This is either because services are non-existent or because epilepsy is not viewed as a medical problem or a treatable brain disorder.

In 1997 the International League Against Epilepsy (ILAE) and the International Bureau for Epilepsy (IBE) joined forces with the World Health Organization to establish the Global Campaign Against Epilepsy to address these issues. (The ILAE was founded in 1909 and is a professional organization with chapters in 60 countries. The IBE was founded in 1961 and is a lay organization with around 55 national chapters). The aim of the ILAE/IBE/WHO Global Campaign Against Epilepsy is to improve prevention, treatment, care and services for people with epilepsy. It also aims to raise public awareness about the disorder. It is hoped that the end result will be a supportive environment in which people with epilepsy can live better.