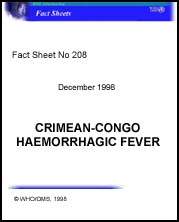 Crimean-Congo haemorrhagic fever (CCHF) is a viral haemorrhagic fever of the Nairovirus group. Although primarily a zoonosis, sporadic cases and outbreaks of CCHF affecting humans do occur. 1998 has already witnessed 2 outbreaks, one in Pakistan affecting four people, with two deaths, and another in Afghanistan affecting 19 people with 12 deaths. The disease was first described in the Crimea in 1944 and given the name Crimean haemorrhagic fever. In 1969 it was recognised that the pathogen causing Crimean haemorrhagic fever was the same as that responsible for an illness identified in 1956 in the Congo, and linkage of the 2 place-names resulted in the current name for the disease and the virus. CCHF is a severe disease in humans, with a high mortality. Fortunately, human illness occurs infrequently, although animal infection may be more common.

The geographical distribution of the virus, like that of its tick vector, is widespread. Evidence of CCHF virus has been found in Africa, Asia, the Middle East and Eastern Europe. Healthcare workers in endemic areas should be aware of the illness and the correct infection control procedures to protect themselves and their patients from the risk of nosocomial (hospital-acquired) infection.

The Virus, the Reservoirs, and the Vectors

The virus which causes CCHF is a Nairovirus, a group of related viruses forming one of the five genera in the Bunyaviridae family of viruses. All of the 32 members of the Nairovirus genus are transmitted by argasid or ixodid ticks, but only three have been implicated as causes of human disease: the Dugbe and Nairobi sheep viruses, and CCHF, which is the most important human pathogen amongst them. The CCHF virus may infect a wide range of domestic and wild animals. Many birds are resistant to infection, but ostriches are susceptible and may show a high prevalence of infection in endemic areas. Animals become infected with CCHF from the bite of infected ticks. A number of tick genera are capable of becoming infected with CCHF virus, but the most efficient and common vectors for CCHF appear to be members of the Hyalomma genus. Trans-ovarial (transmission of the virus from infected female ticks to offspring via eggs) and venereal transmission have been demonstrated amongst some vector species, indicating one mechanism which may contribute to maintaining the circulation of the virus in nature. However, the most important source for acquisition of the virus by ticks is believed to be infected small vertebrates on which immature Hyalomma ticks feed. Once infected, the tick remains infected through its developmental stages, and the mature tick may transmit the infection to large vertebrates, such as livestock. Domestic ruminant animals, such as cattle, sheep and goats, are viraemic (virus circulating in the bloodstream) for around one week after becoming infected. Humans who become infected with CCHF acquire the virus from direct contact with blood or other infected tissues from livestock during this time, or they may become infected from a tick bite. The majority of cases have occurred in those involved with the livestock industry, such as agricultural workers, slaughterhouse workers and veterinarians.

The length of the incubation period for illness appears to depend on the mode of acquisition of the virus. Following infection via tick bite, the incubation period is usually one to three days, with a maximum of nine days. The incubation period following contact with infected blood or tissues is usually five to six days, with a documented maximum of 13 days. Onset of symptoms is sudden, with fever, myalgia (aching muscles), dizziness, neck pain and stiffness, backache, headache, sore eyes and photophobia (sensitivity to light). There may be nausea, vomiting and sore throat early on, which may be accompanied by diarrhoea and generalised abdominal pain. Over the next few days, the patient may experience sharp mood swings, and may become confused and aggressive. After two to four days, the agitation may be replaced by sleepiness, depression and lassitude, and the abdominal pain may localize to the right upper quadrant, with detectable hepatomegaly (liver enlargement).

Other clinical signs which emerge include tachycardia (fast heart rate), lymphadenopathy (enlarged lymph nodes), and a petechial rash (a rash caused by bleeding into the skin), both on internal mucosal surfaces, such as in the mouth and throat, and on the skin. The petechiae may give way to ecchymoses (like a petechial rash, but covering larger areas) and other haemorrhagic phenomena such as melaena (bleeding from the upper bowel, passed as altered blood in the faeces), haematuria (blood in the urine), epistaxis (nosebleeds) and bleeding from the gums. There is usually evidence of hepatitis. The severely ill may develop hepatorenal (i.e., liver and kidney) and pulmonary failure after the fifth day of illness.

The mortality rate from CCHF is approximately 30%, with death occurring in the second week of illness. In those patients who recover, improvement generally begins on the ninth or tenth day after onset of illness.

Diagnosis of suspected CCHF is performed in specially-equipped, high biosafety level laboratories. IgG and IgM antibodies may be detected in serum by enzyme-linked immunoassay (the "ELISA" or "EIA" methods) from about day six of illness. IgM remains detectable for up to four months, and IgG levels decline but remain detectable for up to five years.

Patients with fatal disease do not usually develop a measurable antibody response and in these individuals, as well as in patients in the first few days of illness, diagnosis is achieved by virus detection in blood or tissue samples. This may be accomplished by several methods. The virus may be isolated from blood or tissue specimens in the first five days of illness, and grown in cell culture. Viral antigens may sometimes be shown in tissue samples using immunofluorescence or EIA. More recently, the polymerase chain reaction (PCR), a molecular method for detecting the viral genome, has been successfully applied in diagnosis.

General supportive therapy is the mainstay of patient management in CCHF. Intensive monitoring to guide volume and blood component replacement is required. The antiviral drug ribavirin has been used in treatment of established CCHF infection with apparent benefit. Both oral and intravenous formulations seem to be effective. The value of immune plasma from recovered patients for therapeutic purposes has not been demonstrated, although it has been employed on several occasions.

Although an inactivated, mouse brain-derived vaccine against CCHF has been developed and used on a small scale in Eastern Europe, there is no safe and effective vaccine widely available for human use. The tick vectors are numerous and widespread and tick control with acaricides (chemicals intended to kill ticks) is only a realistic option for well-managed livestock production facilities. Persons living in endemic areas should use personal protective measures that include avoidance of areas where tick vectors are abundant and when they are active (Spring to Fall); regular examination of clothing and skin for ticks, and their removal; and use of repellents. Persons who work with livestock or other animals in the endemic areas can take practical measures to protect themselves. These include the use of repellents on the skin (e.g. DEET) and clothing (e.g. permethrin) and wearing gloves or other protective clothing to prevent skin contact with infected tissues or blood.

When patients with CCHF are admitted to the hospital, there is a risk of nosocomial spread of infection. In the past, serious outbreaks have occurred in this way and it is imperative that adequate infection control measures be observed to prevent this disastrous outcome. Patients with suspected or confirmed CCHF should be isolated and cared for using barrier nursing techniques. Specimens of blood or tissues taken for diagnostic purposes should be collected and handled using universal precautions. Sharps (needles and other penetrating surgical instruments) and body wastes should be safely disposed of using appropriate decontamination procedures. Healthcare workers are at risk of acquiring infection from sharps injuries during surgical procedures and, in the past, infection has been transmitted to surgeons operating on patients to determine the cause of the abdominal symptoms in the early stages of (at that moment undiagnosed) infection. Healthcare workers who have had contact with tissues or blood from patients with suspected or confirmed CCHF should be followed up with daily temperature and symptom monitoring for at least 14 days after the putative exposure.

Helpful web-based resources include: All the Virology on the World-Wide Web (www.etc) which provides information and links to numerous web-based virology sites.